This is a blog archives posting from January 2014. The page is corrupted on the old site, so we’re re-posting here.

January 2014
Last week’s North Raleigh News (and Midtown Raleigh News) featured an informative article by Colin Campbell about the “ghost roads” of Falls Lake. He writes about barricaded sections of Possum Track, Choplin, and Old Bayleaf roads as “slowly crumbling reminders of the rural farms and communities lost to the lake waters.”

The best-preserved of the old roads, the author notes, is Old N.C. 98. That section of old road is planned to become Raleigh’s Forest Ridge Park. It’s a 586-acre peninsula owned by the Army Corps of Engineers and managed by the state.

Those old roads sound like the perfect weekend (or holiday) exploration activity. Might have more to come. Read the story of the roads.

October 2011
What did the roads look like north of Raleigh before the construction of Falls Lake in the early 1980s? Here’s an annotated Google map, based on observations from the 1981 aerial map available from Wake County IMAPS.

Project wide– across all counties affected– sixty-four roads crossed project lands. Of those, twenty were raised or relocated, eighteen were abandoned, and one was modified below the dam site, notes a note in the master plan document.

In particular, when was Six Forks Road and Highway 98 re-routed? Was that in the 1970s, years before construction on the lake started? Janet Steddum’s book The Battle for Falls Lake probably has more details a well. Click once or twice to enlarge: 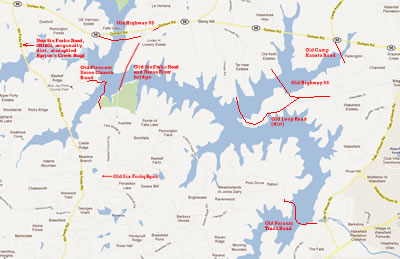 A.C. Rich – Mike… this brings back some memories for me and really indicates just how the development reshaped the old roads. Here’s some additions to your list…

Here is a really neat link to N.C. road maps in 1968, including Wake County. The maps reflect the roads as they actually were up until the very late 70’s

Legeros – Thanks for the additions, A.C.! I have updated the map above. Great find on the 1968 county maps, as well.

Rob Mitchell – AC, I seem to remember a restaurant on one of these roads that was closed when the lake was created.

Rescue Ranger – You can also see Falls lake after being graded but prior to stopping the water on iMAPS by selecting aerial and changing the date to 1981.

A.C. Rich – Mike – If you are touring some of these old areas, and are in some of the deeper ravines around the lake (or river as we called it for years); please ignore any coiled copper tubing, larger containers, mason jars, and/or any vats you may see… just keep moving along and all will be OK! Welcome to the Harricanes! (not misspelled)

Galax, Va – Mike, are there any followers of your blog who remember the multiple drowning incident that occurred at falls lake, while it was in the final stages of construction and prior to its being opened for public use? 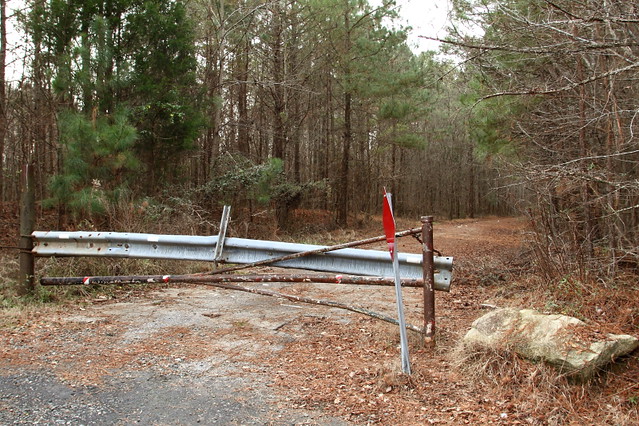 Owen – Back in the early 60’s we used to go to The Falls of the Neuse and poke around. There was nothing there but woods and a small waterfall. Not sure I like what has happened.