This is a blog archives posting from October 23, 2009. The page is corrupted on the old site, so we’re re-posting here and with some updates.

For your Friday enjoyment, let’s look at early fire helmets in the Capitol City.

During the volunteer era, a few firemen had helmets. Such as this Carnes High Eagle currently owned and photographed by a collector in Wake Forest. It dates to perhaps the 1900s. We blogged about these before.

They appear in photos as late as the 1920s, as the odd helmet sitting on a truck. Haven’t found any photos of them worn in action or in poses. Click to enlarge: 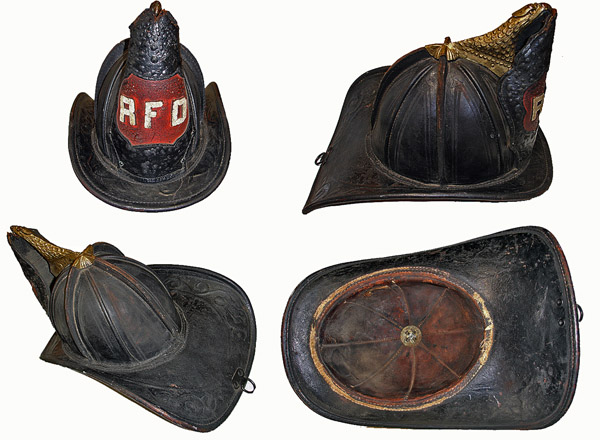 So did they wear, when fighting fires? Dress caps! Those are seen in numerous photos through the 1940s. Then around 1949 or 1950, the first fire helmets were issued. They were plastic with leather shields. No visor. Below left was assigned to Firefighter Joe Allen, who served from 1922 to 1963. The shield numbers were assigned by order of start date, we believe. The Allen family took this photo. Below right was the helmet of Fire Chief Jack Helmet. Photo by the Raleigh Fire Museum, where it’s presently displayed.

In later decades, the plastic helmets added a clear visor, and a newer shield design. This one’s displayed in Mr. Blogger’s man cave. The maker is MSA, and the visor is labeled plectron. There’s a leather chin strap, and a neck flap with a secondary chin strap. The presence of Velcro dates the flap to the 1960s or later. Underneath are the initials CTL, which suggest the owner was Firefighter Clyde T. Leonard, who served in the 1980s. Click to enlarge:

This one was issued in 1989 to new firefighter M. J. Legeros. The maker is Cairns and the model is N660C Metro. It’s missing a decal that was affixed to the front. Same was melted and removed after his first fire. Duplex on Appleton Lane, off North Bend Drive. The helmet was retired a couple years later, when the future blogger moved onto other pastures. It hasn’t smelled of smoke or sweat in a long time. Click to enlarge:

And then what happened?

What helmets have been used since the 1980s?