The Town of Cary yesterday announced a new Fire Chief, with the promotion of Deputy Chief Michael W. Cooper as the new Chief of Department.

Chief Cooper succeeds longtime Fire Chief Allan Cain, who has been promoted to a new position of Public Safety Director.

This press release notes biographical information on both.

Chief Cooper (left) is a 31-year veteran of the fire service. He was hired in 2005 as an Assistant Chief, and promoted to Deputy Fire Chief last year. He’s also the fourth Fire Chief with a connection to Raleigh. See below. 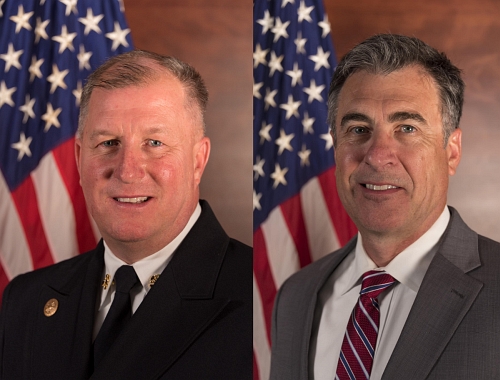 Chief Cooper is a former Raleigh Fire Captain. He’s now the fourth Cary Fire Chief with a connection to the Raleigh Fire Department.

Here’s the updated scorecard, which we last covered in this 2016 posting: