September 24
On Wednesday night, September 27, thirty-six new firefighters will join the ranks of the Raleigh Fire Department. Recruit Academy 42 will graduate in a ceremony at 7:00 p.m. at the Fletcher Opera Theater in the Duke Energy Center for the Performing Arts, 2 E. South Street.

The new firefighters have completed over 1,000 hours of classroom, practical and physical fitness training. Each of them will be certified by the State of North Carolina as a Firefighter Level II, Emergency Medical Technician, and Hazardous Materials Responder I.

Their 32-week academy started on February 20. And in a change from prior academies, fire training preceding EMT training, instead of following it. Most of their instruction was conducted at the Keeter Training Center in downtown Raleigh. Click to enlarge: 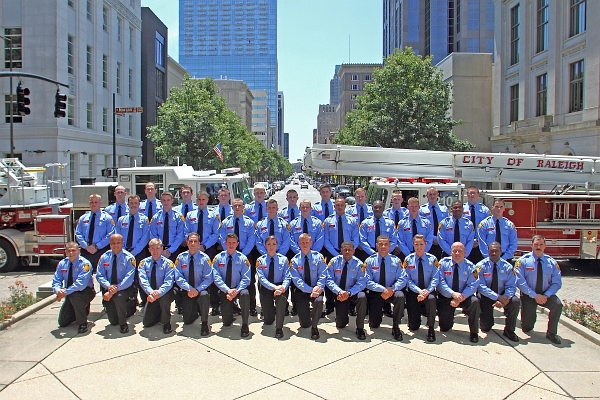 Back row, left to right:

See this page of fire academy photos, from 1978 to 2016. Click a picture for information on each year’s graduating firefighters.