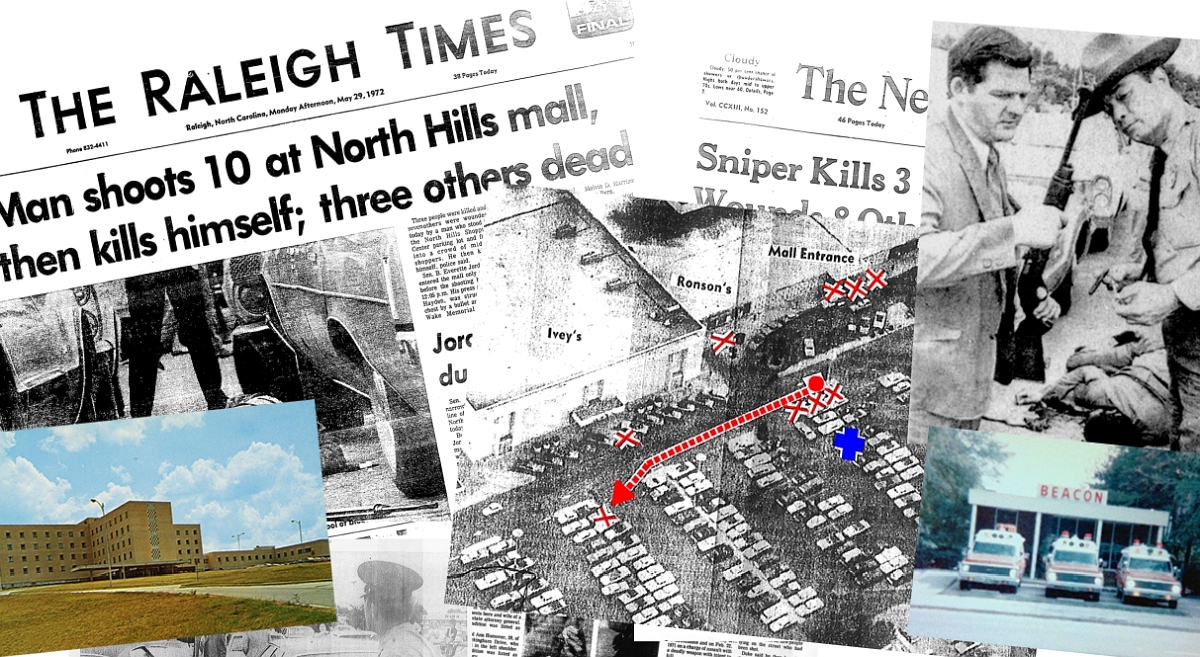 Last month, our attentions were commanded by a reported shooting and resulting major incident at Crabtree Valley Mall. No gunshot victims were found, but numerous medical emergencies presented during and after the evacuation. The resulting multi-patient incident brought dozens of EMS and fire units to the scene. But did you know that another Raleigh mall experienced a mass shooting over forty years ago?

On Memorial Day in 1972, on May 29, a sniper killed three people and wounded eight others in front of North Hills Mall. (A fourth victim died at the hospital, days later.) The noon-hour shooting lasted just a few minutes. The victims were sitting on benches outside the main entrance, standing at or walking toward the entrance, or driving past the entrance in a car. There was also a US Senator in the line of fire, though the attack was unrelated to his visit.

At about 12:05 p.m., from a spot between two parked cars about fifty feet from the front entrance, a tall man dressed in a suit began shooting in that direction.* He had a .22 caliber rifle and fired in bursts. The gunman was Harvey G. McLeod, a 23-year old Raleigh resident who worked as a high-school janitor. He purchased the rifle that morning.

The twelve victims ranged from three to 77 years of age. They were transported to Rex and Wake Memorial hospitals. Three were dead on arrival. A fourth victim died five days later. The others had injuries ranging from minor to serious.

Though we blogged about this in 2008, let’s take a longer look…