Two swift-water rescue teams left Raleigh yesterday, headed to Texas to assist with the aftermath of Hurricane Harvey. They were part of a five-team deployment requested by Texas emergency officials. 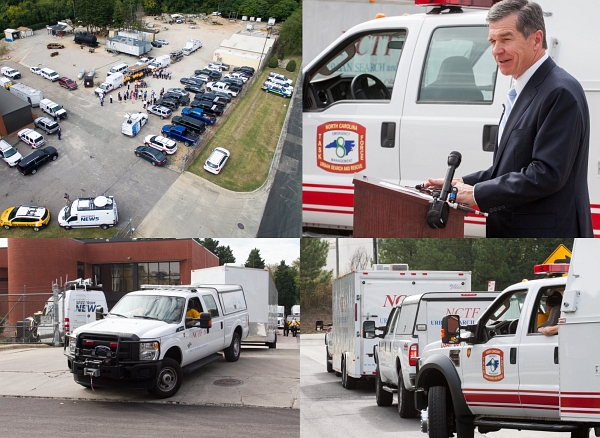 Personnel and equipment from Chapel Hill and Durham fire departments arrived at the training center after 8:00 a.m. Crews prepared the Task Force 8 vehicles, which included:

The Fayetteville team from Task Force 9 arrived around 10:00 a.m., with a similar vehicles and equipment. 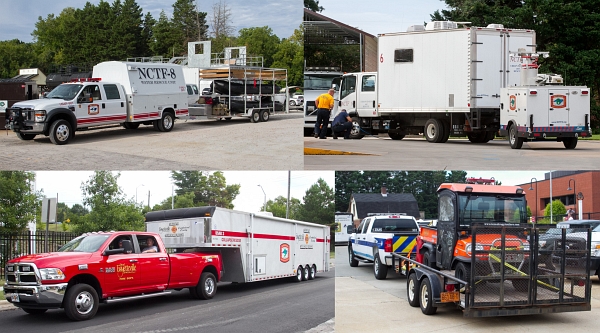 News media, local officials, and Mr. Blogger also gathered at the training center that morning. They interviewed and photographed the firefighters. Google for news stories. Also search Twitter for stories, pictures, and video.

Five Teams From Across The State

The five teams consist of 92 personnel from the following agencies, each part of a larger North Carolina Urban Search and Rescue (USAR) Task Force:

The Greensboro, Charlotte, and Henderson County teams departed from the Charlotte Fire and Police Training Academy, also on Friday morning.

The five teams are part of the state’s swift-water rescue program, which is organized by North Carolina Emergency Management. There are 30 teams positioned across the state. They meet national standards and can be deployed locally, regionally, or across the country.