At the annual convention of the North Carolina State Firemen’s Association in August 1914, State Fire Marshal Sherwood Brockwell gave a presentation on first aid. Here’s a transcription, as printed in the published proceedings…

“When I went up to Dr. Rankin’s office he showed me first the [jar of items for] Red Cross first aid to injured […]. They make these and send them out to the different departments for exactly what they cost and the freight, which is about $5.50. This jar contains everything necessary in the use of first aid, bandages, etc.”

“When you get ready to work on your patient you can turn it right over, emptying it out, and you have a glass vessel that will hold your water; then you have a small bucket to mix your medicine; you have a pair of scissors, a glass and a dropper, bandages and a bottle.”

“The first suggestions are when there is not a doctor at hand. The first thing to do, of course, is to send for a doctor, as he is always necessary, but while you are waiting for a doctor to arrive, apply these first aids to the injured, because a man has only about three gallons of blood, and then, besides, he might be suffering great pain, and when he does get to the hospital he will be in better condition.”

“The first thing liable to happen to a fireman, fighting a fire, is that he is liable to be overcome by smoke, what is called smoke intoxication. You know there are two kinds. First, lead him quickly out into the open air, tear open his clothing. For the smoke that has gone into his stomach you must make him vomit-vichy and milk, hot water and mustard, or if these things cannot be obtained, run you finger down his throat, for you must make him vomit.”

“Then, you are liable to find an unconscious man in a building. The first thing is to get him out. I will show you how to take him out of a second sto1’y building. The first thing you do is to turn him over on his face. Lay him out in this way, then get him in a standing position and get him on your shoulder; take and pull him over your shoulder (this way) and grab him here. Now, he is not heavy. I can run with him, and I have both hands and feet free. You can carry a man weighing two hundred and twenty pounds down a ladder in that way.”

“When you get him to the ground, you want to try to start him to breathing. Will say here that every progressive city in the United States should have a pulmotor. They cost about one hundred and ninety dollars, and it is the greatest instrument in the world for artificial respiration. It has the same effect on a one-day old baby’s lungs as it would on Jack Johnson’s. But until you get a pulmotor, you want to know how to get along without it.”

“Now, the first method is done by taking the patient, laying him flat on his back with shoulders raised; then open his mouth and get out any false teeth, chewing gum or tobacco, and take his tongue and pull it out. If you have nothing else, take your scarfpin and stick his tongue to his lip to hold it out. Any kind of a pin will do if you haven’t a scarf pin. Then straddle his body and take his arms and press some of the poison out of his lungs. Bring his hands out and put behind him for every breath he makes. By doing  that when you press here you cause the lungs to throw off the poisonous smoke, and that gives the lungs a chance to inhale some good, fresh air. You do that about twelve or fifteen times a minute, and don’t you ever let up.”

“The other method is still easier. If you have two men handy, you bring his arms up over his head and press back. If you only have one man, turn the patient over, letting his head go to one side; pull his mouth open and his head will have a tendency to come out. Then you put the palms of your hands in the loins of his back, which is at the base of his lungs. Gyrate your hands once for each time you breathe, or from twelve to fifteen times a minute.”

“When you go into a building and find an unconscious person lying there, you want to find out the first thing if he has any broken bones, for if you pick him up and shake him about you will do him more harm than good, if he has any broken bones. The first thing is to ask him if he is hurt, and if he is conscious he will tell you. If he is unconscious look him over, and if you come to the conclusion that he has had a fall, look for any fractures. Now, if you run across a hump on his body that shows that the bone is broken and the ends are shattered. Now, if you pick that man up, bending his leg about like that, then that broken bone is liable to puncture a blood vessel, so, except in a case of a big fire, bind him up before you move him.”

“You want to make a stretcher for him right quick. The best thing to do is to take a horse blanket and a pike pole. If you haven’t a pike pole tear a paling from the nearest fence. If you have a pike pole, straighten out your horse blanket, put it around the pike pole, reach up into the wall and tear out some nails, run your nails through this, about six, or in an emergency four will do. Remember this when you are going to use that stretches–you can handle that stretcher better than you can a man’s body. Now, we have him ready to carry out. In case you want to raise his head, get a shingle.”

“In case you have all motor driven apparatus and have thrown your horse blankets away, you would call your firemen in. They all wear rubber coats. Button up your coats, put two down and run your pike polls through them; then turn them over on the flat side, away from the clasps. The men who made the stretcher would remove their coats, of course.”

“When you get your patient out, and you want to splint him is where your first bandage would come it. You put your splint on the break, and if you haven’t any bandage pull your shoestrings out of your shoes. You don’t have to make a finished job because the doctor will do that later.”

“If a man has a broken arm, then you ·have him tied up so he won’t sling his arm around while you are taking him out on the stretcher.”

“If he has his arm and if he has his leg both broken, pull off the nearest fence paling, take it and take the rope from your fire wagon and tie him up good to that splint. You have him braced above the fracture on both places. In case you cannot get a picket or anything of that kind, tie his legs together.”

“The next thing that is liable to happen is that a man might get a severe cut, say on his arm. Now, everybody has two kinds of blood vessels in his arm, one is a vein and the other is an artery. The vein conveys the blood to the heart and the artery conveys the blood from the heart. If the blood is pumping a bright red it is from an artery; if a dull red and flowing slowly, it is from a vein. The four main arteries of the body run down, the first inside your arm, about close to the seam of your shirt; on your leg· it runs down along the inside of your trousers. Now, that blood vessel carrying that blood does no other duty than your fire hose does. You know if your press your fire hose you stop the water. If you hold an artery that way you stop the blood pressure. You merely tie the artery up between the wound and the heart; if it is a vein, between the extremity and the wound. All you have to do is to mash that blood vessel. In this kit that I was showing you they have a special arrangement for stopping this blood. They strap this around here and pull down on it until it stops the bleeding. A belt will serve the same purpose. “

“Another thing, gentlemen, is a scalp wound, which makes a very ugly wound, and bleeds profusely. The way to do that is to compress your wound. Take a small piece of your bandage like this, roll it up to fit the wound, wash the wound out, and one of the best antiseptics is one teaspoonful of iodine to a tumblerful o. water. If you cannot get that, take some gasoline, which is also a good antiseptic, although not as good as iodine. Never use kerosene. Now, to stop the scalp wound, put the bandage down into the wound carry it around the skin and press it down into the wound, which will soon stop the wound from bleeding.”

“Another thing is a nail puncture. In this case, you should, by all means, send for a doctor at once. When he gets there he will take that nail hole and cut it four ways. When he gets to the bottom of that wound be will wash it out with iodine and water and will give you the treatment for tetanus, and keep it washed out in the meantime, and let nature take its course, healing from the wound outward. The old remedy for a nail puncture was to take turpentine and wash it. Don’t ever put turpentine on a nail hole, because turpentine is one of the best things in the world for healing up a surface wound, but that is not what you want in a nail hole but something to heal it from the inside out. “

“If you cannot get a doctor get some laudanum and fill the hole with it if not, fill it with iodine solution. The wound will try to close up, so the best thing to do is to take a syringe and fill it full and press it in the hole and flush it out. Then make a poultice and press down in it and that will absorb it.”

“If you will look over that book I have given you, you will find a handy remedy for almost anything that will happen to you firemen. Don’t ever give a wounded man alcohol. Alcohol calls out some of the energies of your nervous system, which will keep from overcoming the wound.”

Motion made to adjourn.

Plus one stock photo, to add some visual appeal. But it’s from a later era, artificial respiration demonstration in Raleigh in 1940. Courtesy North Carolina State Archives. 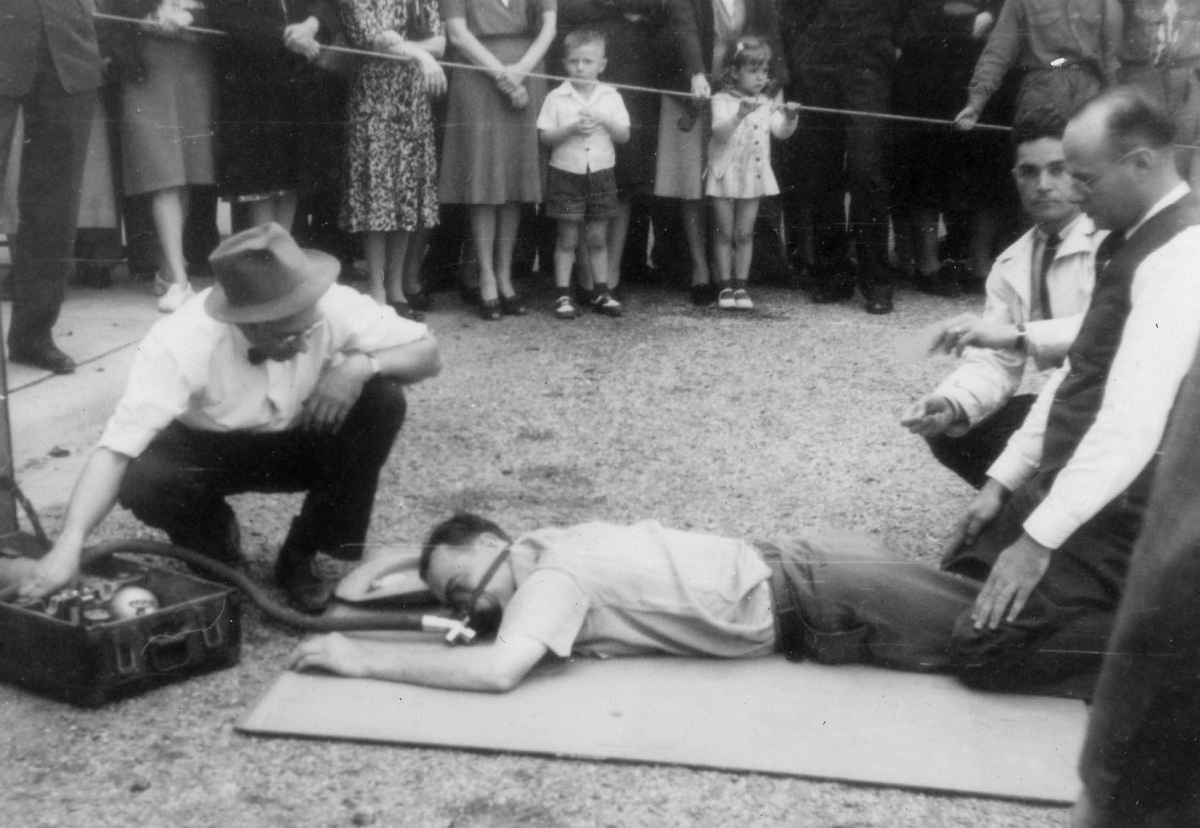