This is a blog archives posting from September 5, 2014, and re-posted here as the original is unavailable due to technical issues.

Here’s a treat of a treat. Abandoned bridge over Crabtree Creek, just west of Crabtree Valley Mall. Specifically opposite Morehead Drive at Glenwood Avenue. Can be accessed both from the sidewalk on Glenwood, or a greenway trail on the other side of the bridge. And entirely unknown myself until this week. Talk about exciting! 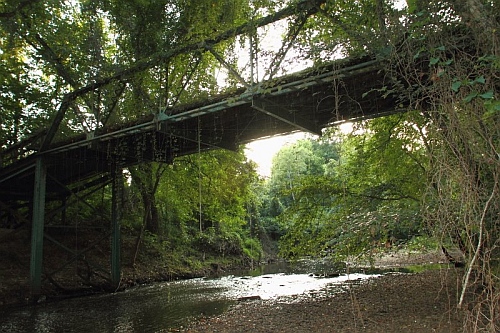 Not a public roadway, but a private driveway. Served as access for a house that was located “up the hill.” Here’s an aerial photo from 1999, from the Wake County IMAPS site: 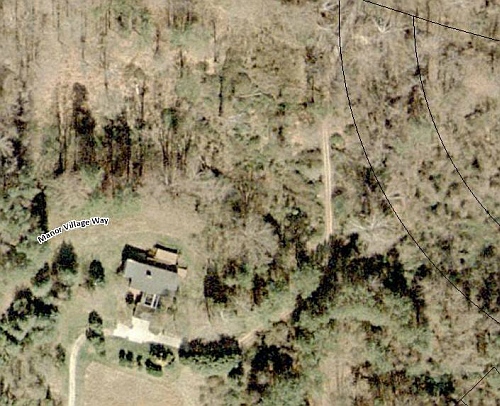 Leroy Martin Sr. and his wife Elva lived in the “upper house.” When Leroy died, Elva remarried my mother’s father Robert Kost. His son Leroy Martin Jr. and family lived at the “lower house.” My grandfather had an old Army jeep painted bright red. We used to ride in the pasture where Crabtree mall was built, chasing cows, fording the creek, etc. It was great fun for a small boy.

The bridge was originally all wood. It was replaced in the mid 1960s, as best I recall. The creek was diverted past that location, when construction of the mall began in the 1970s.

There was also gravel road out of the area, through the woods and that connected to the winding two-lane road that’s now Edwards Mill Road. You could reach both houses that way as well. This was before they built the road from Glenwood Avenue to the top of the hill behind Crabtree Mall.

At least one retired Raleigh firefighter remembers a fire at Martin house, after being assigned to Station 17 when it opened in 1984. Access was off Edwards Mill Road, via dirt road.

See my photos from my late-day explorations this week. Seems safe enough. Feels solid underfoot, though there are quite a few missing boards. Who owns the bridge? It resides on private property, on a slender tract of vacant land that totals 3.66 acres. Described as “Fairview Farm.”

Up the hill is the Martin property, last owned by the family name in 1990. The tract is 36.39 deed acres and is presently the site of an apartment complex. The adjoining Nationwide Insurance site is 16.66 deeded acres. It was sold in 1974 by Fairview Development Company.

Guessing this was also part of Fairview Farm, later transformed or sold to a development company. The insurance building was built in 1975, say tax records. Maybe readers know more.

Brian LeBlanc – http://www.wakecountyroads.com – That small sliver of land between Glenwood and the creek, including the bridge, is still owned by the Martin family. (They also own the plot of land that houses the BB&T bank on Creedmoor Rd next to the creek.) I remember that there used to be a traffic light at Glenwood and Morehead, where the driveway lets out onto Glenwood, that was gone by about 1990 but the yellow control box still remains at the intersection. As an aside, if the long-discussed reliever road that would connect Glenwood to the Beltline via Crabtree Valley Avenue is ever built, it would cut across this property and let out at the bridge. The right of way is already visible on the IMAPS site.

Legeros – How about a rant about Glenwood Avenue through Crabtree Valley? That’s classic old-school Raleigh-style planning. Access roads and driveways. No considerations for free-flowing traffic. My magic wand would close all driveways between Creedmoor and the Beltline. Maybe also the pair of side streets to inbound Glenwood outbound between Blue Ridge and the Beltline. Sure, that would place an inhuman burden on the roads that connect via controlled intersections. Guess you’d have to widen those. Raleigh’s roads drive me nuts that way. Everything seemingly designed for a smaller, slower, less-dense city. (Which Raleigh was, and perhaps never expected the resulting exponential growth.) Greensboro always comes to mind as a nearby city with “throughways” that are more flowing and less interrupted by driveways.