We’re ten days away from this year’s NCFFF memorial service. Here are details and the list of this year’s honored. LODD info. via Google.

The ceremony starts at 1:00 p.m. The event will be preceded by a parade down Hillsborough and Dawson Streets at 10:00 a.m. The parade will consist of an honor guard and apparatus and members from the North Carolina fire departments that have experienced a line of duty death. For more information see www.ncfff.org.

Honored at this year’s memorial:

Eric D. Lacewell, 51, Captain
Wilmington FD
11/4/14
Died of complications of an injury received at the fire station in 2011. He was found on the kitchen floor, having fallen. He became a quadriplegic as a result of his injuries.

William P. “Will” Willis
Engineer, 34
Asheville FD
2/17/18
Died at his home in Mars Hill from a rare form of kidney cancer. Willis’ death was the second to be ruled as duty-related by the state. See above.

Richard L. Sales, 52, Fire Chief
Reynolds VFD
4-8-18
Died in a single-vehicle crash in Interstate 40, while traveling on fire department business. He was headed to Wilmington for a conference on safety, where he was going to accept an award on behalf of his department.

Romulus S. “Tony” Spencer III
Fire Chief, 51
Engelhard Fire & Rescue
6-3-18
Died of a heart attack, after participating in training the day before. He was stricken at his home on June 1, and died at Norfolk Medical Center on June 3.

Dakota R. Snavely
Firefighter, 17
East Side FD
6-10-18
Died in a vehicle collision, while responding to an emergency call. A truck lost part of its load in front of his personal vehicle, which caused him to crash. The truck then also overturned. He died at the scene. 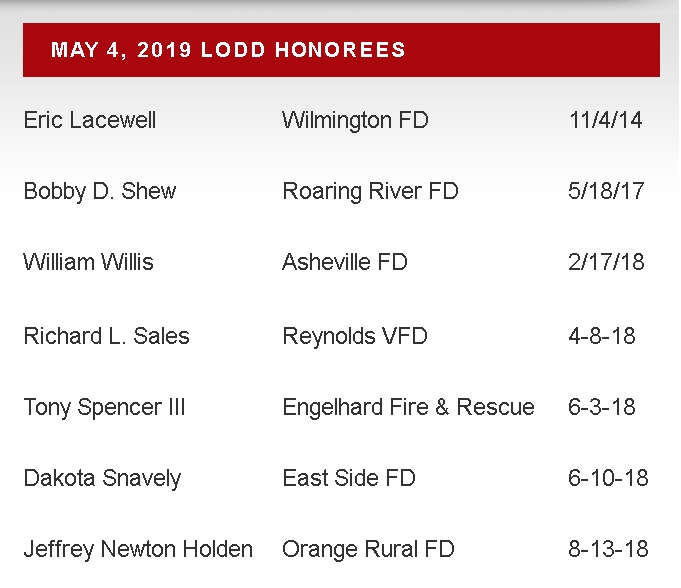