Note: See subsequent posting about the truck’s delivery on April 28, 2016.

Production is complete on the airport’s new 2016 Oshkosh Striker 3000, 2000/3200/420/450#/460# + Snozzle. It’s also the first lime apparatus since the 1990s. Here are some pictures from the pre-delivery inspection last week, shared by our friends at RDU Fire-Rescue. Delivery is expected next week. Click once or twice to enlarge. Then scroll down for specs, details, and more. 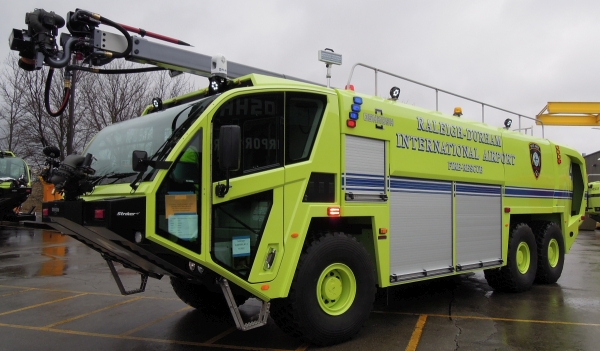 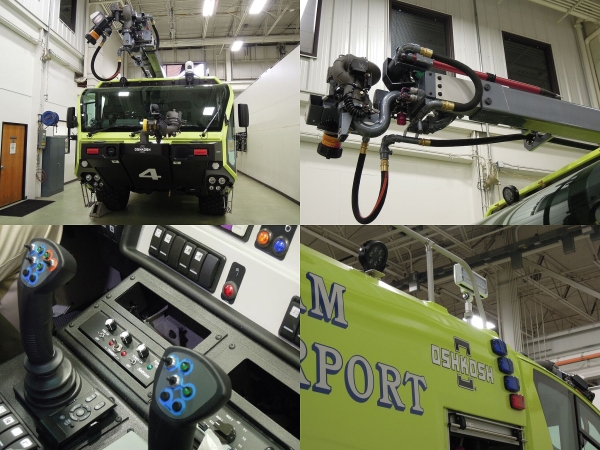 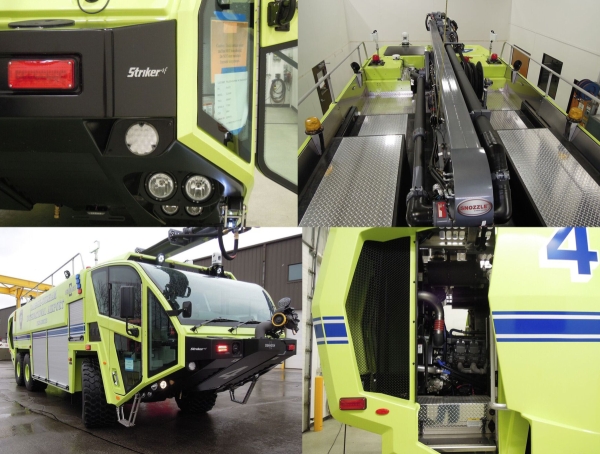 Production is underway on a new crash truck for Raleigh-Durham International Airport. Our friends at RDU Fire-Rescue have passed along some pictures and detailed information.

The 2016 Oshkosh Striker 3000 (with Snozzle!) will replace CFR 4, a 2000 Oshkosh T-3000. It was purchased by the airport authority with 85% of the funding from federal and state sources, via the Airport Improvement Program. The truck will be painted safety yellow, which is a requirement of the program. (The department’s fleet is presently white with blue striping.)

Check out these pics, which include a trio of similar trucks awaiting delivery to Charlotte. Then keep scrolling for specs and more information. Click to enlarge: 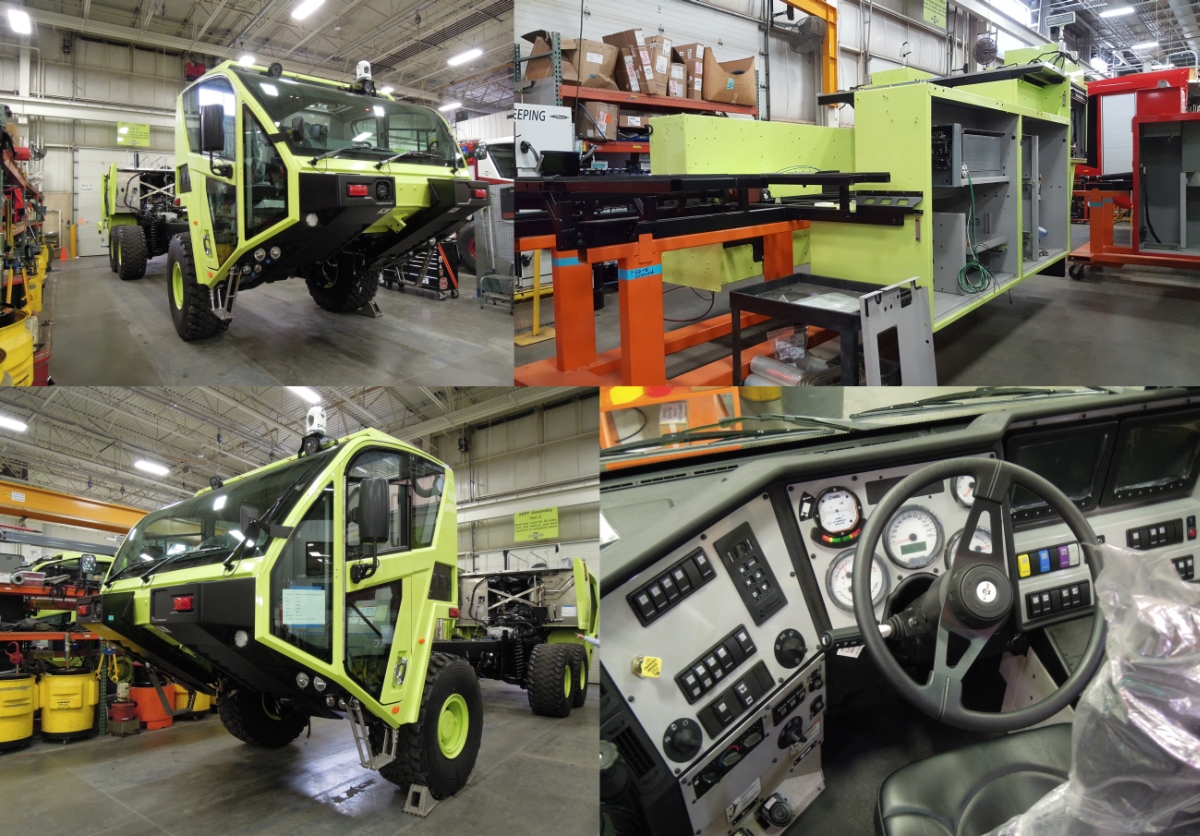 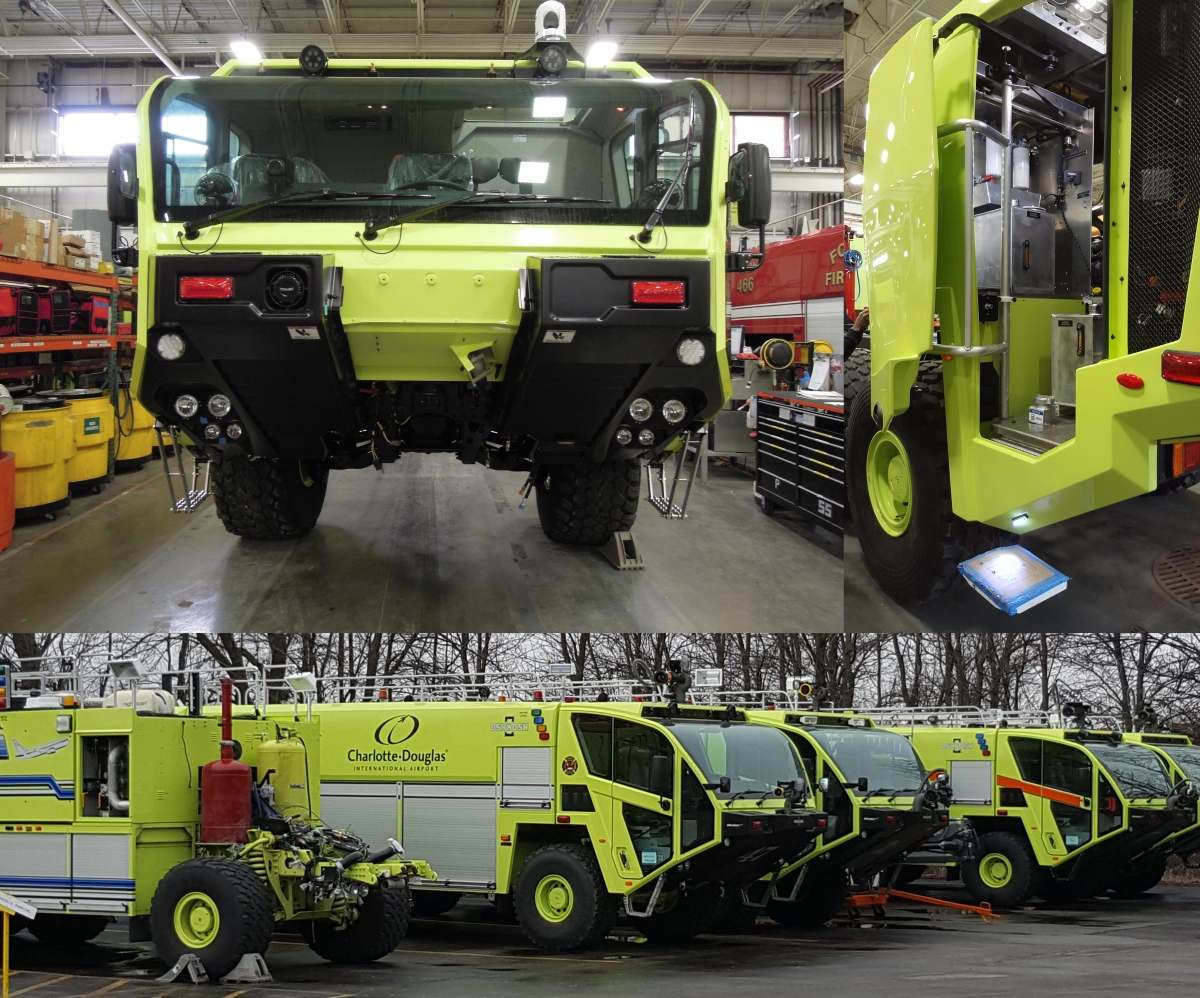 Bottom photo showing a trio of Strikers in production for Charlotte. 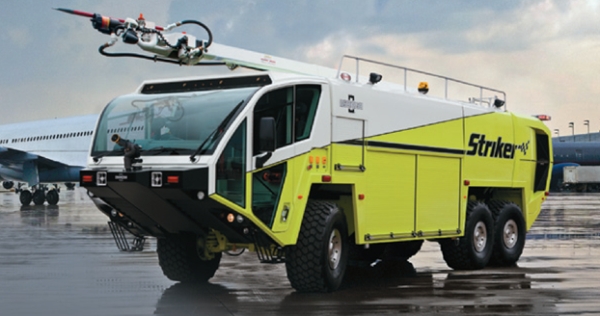 Stock picture. The RDU truck will be solid yellow.

This is a first for the airport’s crash trucks. Called a High Reach Extendable Turret (HRET), it adds the ability to:

About the Driver’s Enhanced Vision System

This is another new capability for the airport’s ARFF units. DEVS is a moving map display that helps vehicle operators safely navigate in low visibility conditions. Such as rain, sleet, fog, or smoke from a fire. It displays the location of the truck on the airfield, and also provides alerts as the vehicle approaches runway holding markings and runway safety areas. (Called an Imbedded Runway Incursion Warning System.)

Additional features of DEVS are:

The fire department just finished with their mid-construction inspection at the Oshkosh/Pierce plant in Appleton, WI. Their pre-delivery inspection is scheduled for mid-April.

Delivery is anticipated at the end of April. After it has arrived, two weeks of hands-on training will be provided by Oshkosh for all personnel. That training hasn’t been scheduled, and the timeframe for in-service is still being determined. Maybe by mid-June.

Airport administration, meanwhile, is evaluating retaining the current CFR4 as a reserve truck. (The fleet currently consists of front-line rigs only.) They’re also looking at replacing CFR 2 and CFR 3 in a future budget year.

The current fleet of ARFF apparatus at Raleigh-Durham International Airport:

Learn more about the airport fire department and its history on my web site.