The new structure was originally conceived by [prior Fire Services Director] Mike Wright, notes Campasano. It was designed to provide additional support for both the Fire Tax District and the county fire departments. Wright retired in 2014, as readers recall, and here s a great blog post about him and his career. 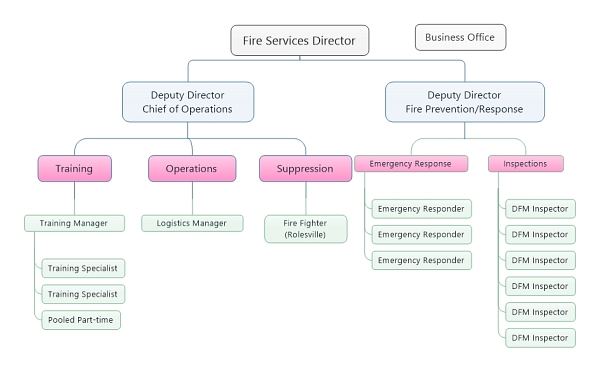 Above is the new organizational structure. Notable changes include:

The transition to the new configuration has been a gradual one, notes the Director. We hired Grant Vick as the Logistics Manager and Darrell Alford as the Operation Chief, back in the fall, says Campasano.

He adds that the Fire Training Chief position went away in December, when Ricky Dorsey retired. We are currently in the process of hiring a Fire Training Manager, so the reorg is still a work in progress.

Says Campasano, At this time, there are no future changes contemplated. As the current organizational layout is very new, we would need some time to determine how it is working and what future tweaks it may need.

Looking closely at the chart, here are a couple other things:

The division also works closely with nineteen fire departments in Wake County that provide service in the Fire Tax District. Thirteen departments are non-profit corporations, and six are municipal fire departments. The Fire Tax District includes most of the unincorporated areas of the county, along with the town of Wendell. These departments use a combination of full-time staff, part-time staff, and partially compensated volunteers. What’s the total count of personnel or units or stations, and/or area or population served? Maybe one of our readers will crunch those numbers.

Wake County has twenty-three fire departments total. The four not contracted by the county are Holly Springs, Knightdale, Raleigh, Raleigh-Durham International Airport. The North Carolina Forest Service also has a base in Wake County, and provides fire suppression services and support. Wake County Fire Services also provides support to these agencies as well.

Here s a blog post and accompanying research document (PDF) with a historical perspective on the Fire Services division. Some highlights: