What’s the difference between a public and private fire hydrant, as defined here? They’re both connected to the city’s water supply, and conform to the same specs. Public hydrants are installed on roads and streets and public sites, and they’re maintained by the city. They are over 16,000 public fire hydrants in the city.1

Private hydrants are typically found at apartments, HOA-managed residential developments, and commercial properties. They’re maintained by the property owners, and are always located outside the City right-of-way. There are 4,400+ private hydrants in the city.2

The city’s water system also supplies Garner, Knightdale, Rolesville, Wake Forest, Wendell, and Zebulon. In those other communities, the hydrants are yellow, which in turn follows a recommendation from the National Fire Protection Agency (NFPA). The change in the city aligns with this standard.

We’re told that hydrants caps will be always chrome (e.g. reflective) silver. No varied colors to note hydrant capacities. The change is immediate. Yellow hydrants are already appearing around town. The timeframe for total conversion will be a number of years.

Public Utilities handles hydrant maintenance including testing and painting. In days of old, the fire department was the paint crew, and also did testing. Those tasks were transferred a number of years ago.

The city’s system of fire hydrants was installed in 1887. Firefighters originally powered their hose streams from hydrant pressure, prior to use pumping engines. Here’s a blog archives post with that historical perspective.

What other hydrant systems are used around Raleigh or Wake County, outside the city-operated system? Readers, please add! 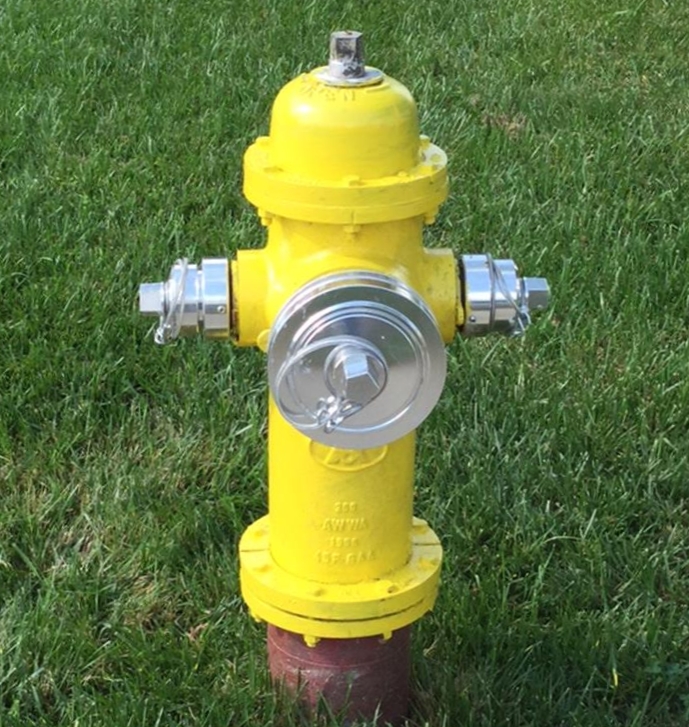 2From the Winter 2014 issue  (PDF) of the Raleigh Fire Department newsletter: “There are an estimated 4,400 public fire hydrants in the City of Raleigh.”