Here’s a run card and narrative about yesterday’s reported shooting at Crabtree Valley Mall. Gunshots were reported on the second floor, near the food court, just after 2:30 p.m. The mall was placed on lockdown, and then evacuated as law officers secured each location. The mall occupants (employees, shoppers) were evacuated to the lawn and parking lot of the Marriott hotel, across the street.

No victims with gunshot wounds were located, but other medical emergencies were reported both during and after the evacuations. None were reported as life-threatening.

Wake County EMS managed the resulting multi-patient incident over a number of hours, with resources including over twenty paramedic ambulances, four district chiefs, a special operations unit, and a medical ambulance bus. They also performed responder rehab, and assisted with helping the evacuees stay hydrated. The heat index was over 100 degrees. 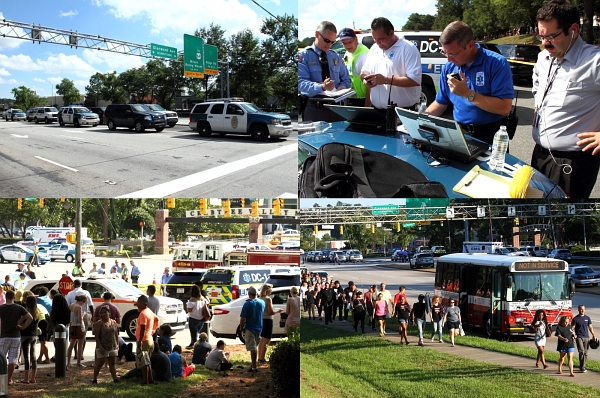 By the ninety-minute mark (when Yours Truly arrived), EMS and other command branches were located on Marriott Drive, in front of the hotel. They later moved inside into a conference room. EMS staging was located in the parking lots near the Best Buy and Barnes & Noble. The three engine companies had also relocated to Marriott Drive or nearby Glenwood Avenue. The roadway was closed between Lead Mine and Creedmoor roads. 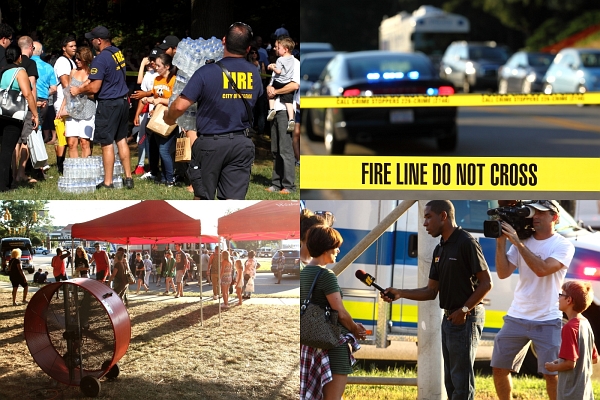 Nine people were transported to hospitals, with an additional eleven patient contacts by EMS personnel. The medical evacuation bus Evac 1 was also utilized for rehab. Bottled water was also brought to the scene by the Wake County Fire Marshal, with supplies coordinated by Wake County Emergency Management.

Additional rehab supplies were furnished by a State Medical Assistance Team unit out of WakeMed. They brought canopies, fans, and misters to the scene.

Mall employees, hotel employees, and many others helped the incident remain manageable. As were the positive attitudes of the hundreds of evacuees over the course of an uncomfortable afternoon outdoors.

The first press conference was held just before 6:00 p.m., with Raleigh police and Wake EMS providing updates. With the hour, evacuees were being escorted by to their vehicles, in small groups either on foot or by bus. Fire and EMS units began clearing after 7:00 p.m. The mall remained closed through the evening.

Google for numerous news stories for more information about the incident.

Two convalescent ambulances and ambulance mini-bus from Samaritan. Two paramedic ambulances were also requested from Durham County, but were unavailable.