On Tuesday night, October 13, 1964, a restaurant building at the fairgrounds was destroyed during a busy night at the North Carolina State Fair. Thousands were attending the fair, and watched with rapt attention as “portable” restaurant was consumed by flames. The $100,000 structure was a loss, and the blaze likely inspired the creation of the on-site State Fair Fire Brigade. Here’s that tale: 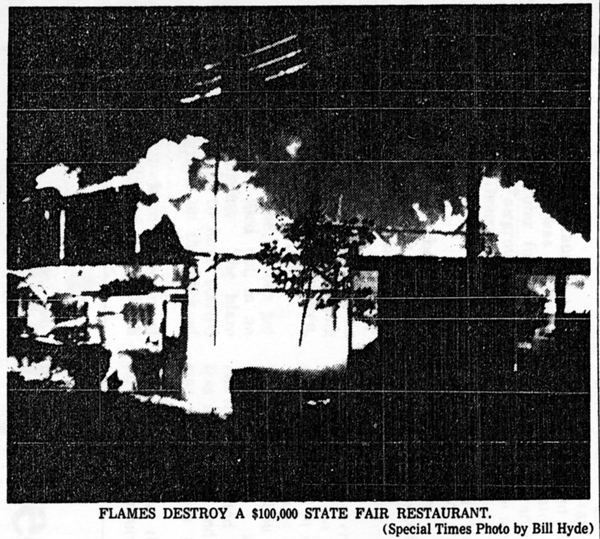 Part of a record N.C. State Fair crowd witnessed an unplanned attraction last night when a portable restaurant burned to the ground.

Located between the Arena and the Red Cross lounge, the restaurant was approximately 50 by 100 feet and held a maximum of about 250 people.

Lyerly then saw a ball of flame cover over the top of the stove and he immediately grabbed one of the two fire extinguishers on hand.

He was unable to control the blaze, even with the use of another extinguisher.

Men from nearby booths began to remove the tables and chairs from the restaurant, as the patrons formed orderly lines to the exit. “There were lots of women and children,” said Lyerly, “but nobody panicked.”

He said he did not know the cause of the fire.

It was about 6:20 p.m. when the milling crowds around the arena and the head of the Midway noticed orange flames against the twilight sky. There was a general, but leisurely movement toward the area.

The arrival of a fire truck at 6:32 [p.m.] brought thoughts of additional spectators. Officials of the sheriff’s department, the police department, the military and the Fair itself joined arms to restrain the crowd. The entire restaurant was in flames, and wiring directly overhead had begun to smoke.

Robert W. Shoffner, fair manager, worked his way through the crowd, and he requested orderly behavior. He later praised the orderliness of the spectators. A sound truck which had arrived behind the first fire truck kept up a stream of instructions as the danger from the wiring increased.

The frame of the building collapsed at 6:45 p.m. while firemen were extinguishing flickering remains of the building. As the firemen left, maintenance crews moved dump trucks into the area and began sorting the stainless steel and the glass into junk heaps.

By 7 p.m. lights were restored to nearby concessions including two owned by Lou Kane, who also owned the destroyed restaurant. Kane, who had operated eating places at the Fir for the past 25 years, had let his fire insurance lapse only three days before he unducted [sic]. The loss was estimated at $100,000.

A portable restaurant valued at $100,000 was destroyed in a spectacular fire on the N.C. State Fairgrounds Tuesday night. Thousands of spectators crowded around the scene.

Fred Lyerly, chief in the Char-Broiler Steaks, the cafe that was burned, said it was a “miracle” no one was hurt. There were about 150 patrons in the structure, including many women and children, when the fire started.

Eyerly said the patrons got in line, and filed out, in an orderly manner. The blaze was thought to have started from grease on the back of a grill.

Firemen from three rural fire departments and one Raleigh station had to fight their way through spectators who packed in around the burning structure to watch it burn. The Highway Patrol estimated 150,000 attended the Fair during the day. Fair officials called it the largest crowd in the Fair’s history.

The fire began at 6:15 p.m. and was reported shortly thereafter. However, it was 6:32 p.m. before the first fire fighter units arrived at the scene.

The building was owned by Mr. and Mrs. Lou Kane of Allen, PA, and was chief constructed of stainless steel walls and glass. It was covered with a canvas roof.

Kane said the structure was not insured. He dropped the insurance only three days ago, he said.

The building, one of the largest eating establishments on the fairgrounds, measured 50 by 100 feet [and] could seat 250 people.

The man who discovered the fire and helped to get the customers out of the restaurant was later identified as Charles “Bunky” Boger, who is with the rodeo at the Fair.

The Kanes, who have been operating eating establishments at state fairs here for [illegible].

[Illegible paragraph about the fair’s public information officer saying that the police had to something about the crowd, so firemen could fight the fire.]

Firemen from the Fairgrounds Rural Fire Department, and rural fire departments from Cary and Apex, along with one Raleigh [fire] station, responded to the alarm.

Lamm said that a fist fight started in the crowd when a police officer tried to get a man to move out of the way of fire fighters. As a result of this incident, Alexk Ralph Reed, 20, of 905 Peace Terr. was dragged away by police and taken to the Wake County Jail, where he was charged with failing to obey an officer in an emergency and resisting arrest.

Proprietors of adjoining restaurants and concessions poured water on tents and building tops to keep the fire from spreading to their facilities.

[ Remainder of story describes that day’s attendance and activities at the fair. Thousands of school children, a Marine band concert, warm temperatures and sunny skies, toddlers tagged at each gate with names, addresses, and telephone numbers (a new feature to reduce the searches for lost children), bumper-to-bumper traffic and the Highway Patrol moving them through, a grandstand show with George Hamid including the famous Royal Mounted Police “Musical Ride,” and highlights of the coming day’s schedule. ]

One person who remembers the fire is retired Raleigh Fire Department Captain Terry Partin. His parents, Maurice and Josephine Partin, also had a small restaurant at the State Fair that they operated with Biff and Charlotte Abbott. The restaurant was located where the entrance to the Midway is today.

Biff Abbott was also Fire Chief of the nearby Fairgrounds Fire Department. The chief was also working in the restaurant when the fire happened. Partin was at the fair that day, and saw the fire, and ran down to the restaurant to tell Biff.

This was an era before all the volunteer firemen had personal pages. The chief, however, had a very large pager about the size of a large transistor radio, which would alert him to fire calls. Partin doesn’t remember him having it with him that day.

Partin remembers being so out of breath from running, and so excited about the fire, that he could hardly tell Chief Abbott what was happening. He remembers the building was an open-tent type of restaurant and it burned in no time.

The fair was extremely crowded that day, he recalls, and it took some time for the fire department to arrive.

They had to respond from their fire station, which was located on Blue Ridge Road just south of the present Westchase Boulevard. And heavy traffic likely impacted both the arrival of the volunteers, and the fire trucks arriving at the fairgrounds.

This fire and the comparatively long response time was the likely reason (or one of two likely reasons, see below) for the creation of the State Fair Fire Brigade.

Organized in the mid-1960s, these were a group of off-duty city firemen hired to stay on site during the operation of the State Fair. Both during set-up and for a few days after closing.

They borrowed their first fire engine from Garner, and would later operated loaned apparatus from local dealers. They later operated golf carts, used for their pre-opening safety checks, EMS responses, and more.

The brigade operated until 2005, when Western Wake Fire-Rescue took over contracted fire protection at the State Fair. They had been co-located with the brigade since 1998.

In their later decades, the brigade was located on the west side of the fairgrounds, near the Village of Yesterday.

The members bunked in a mobile home also loaned for their use. The firemen cooked three meals daily, and also fed the deputies and troopers also working the event. The quarters provided a nice place for them to meet, and rest, and use the rest room.

The “State Fair fire station” was a popular destination for off-duty Raleigh firefighters and their family members, as well as visiting firefighters from around the state. Many have great memories of the fellowship with the brigade during that time.

Yours Truly is digging deeper into their history, and will have more to report. 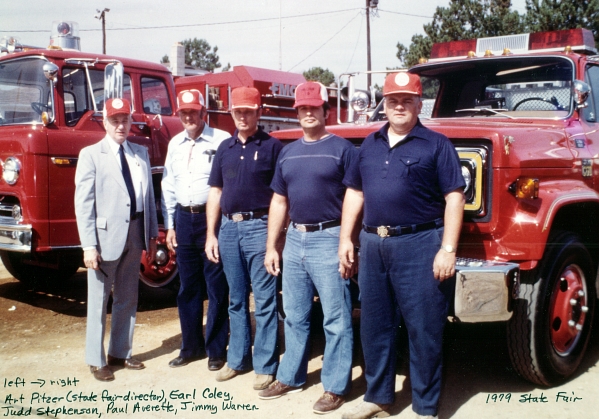 Fires at the Fair

Earlier fires at the State Fair, both during and before “fair week” have included: 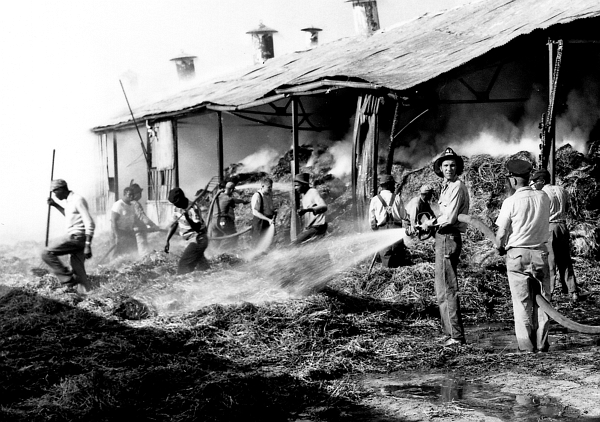 Note: Thinking that the brigade was created after 1965, after both this fire and the one the year before. 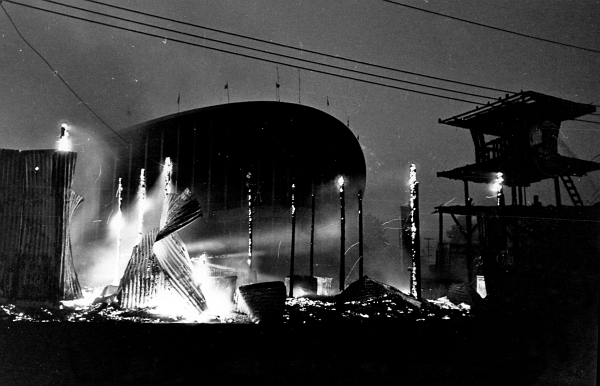