Sept 25th 2020- At 510pm, Raleigh-Wake County 911 dispatched E282 for working fire in a former school at 5901 Riley Hill Road, in Wendell’s primary district. Wendell Fire Department Engine 112 was first on scene, with New Hope Car 1 (Chief Price) right behind them, reporting heavy smoke and flames visible from a large H shaped single-story structure, and requested RW911 “Send me every tanker in the county.”

Engine 282 arrived next, taking position on the west side of the structure, while Wendell Engine 112 had taken position on the east side. Multiple lines were stretched from both engines, deck guns & portable master streams were deployed, and 5 drop tanks were set up, due to the are being without any nearby fire hydrants.

The water point was established by Rolesville Fire Department Pumper 152 at a hydrant at 1099 E Young St at Rolesville High School. Over 60,000 gallons of water were used, with every tanker making at least one shuttle run from the water point to the drop tanks.

Wake New Hope Fire Department Tankers 9, 10, & 11 responded as part of the tanker shuttle, and Engine 281 from New Hope Station 1 and Engine 284 assisted with suppression efforts. The fire would eventually escalated to an equivalent of a 4th alarm, before being marked under control after 90 minutes. Crews remained on scene for another 3 hours hitting hotspots and assisting WC1 with the investigation.

“Send me every tanker in the county.” That was New Hope Fire Chief Lee Price early into the major fire at old Riley Hill School in northeastern Wake County on Friday afternoon, September 25. Dispatched 5:11 p.m.

Heavy fire showing through the roof of a historic former school building at 5901 Riley Hill Road. Built in 1928, the “H”-shaped, single-story structure has 14,728 square-feet. Plus the adjacent 6,308 square-foot gymnasium building. 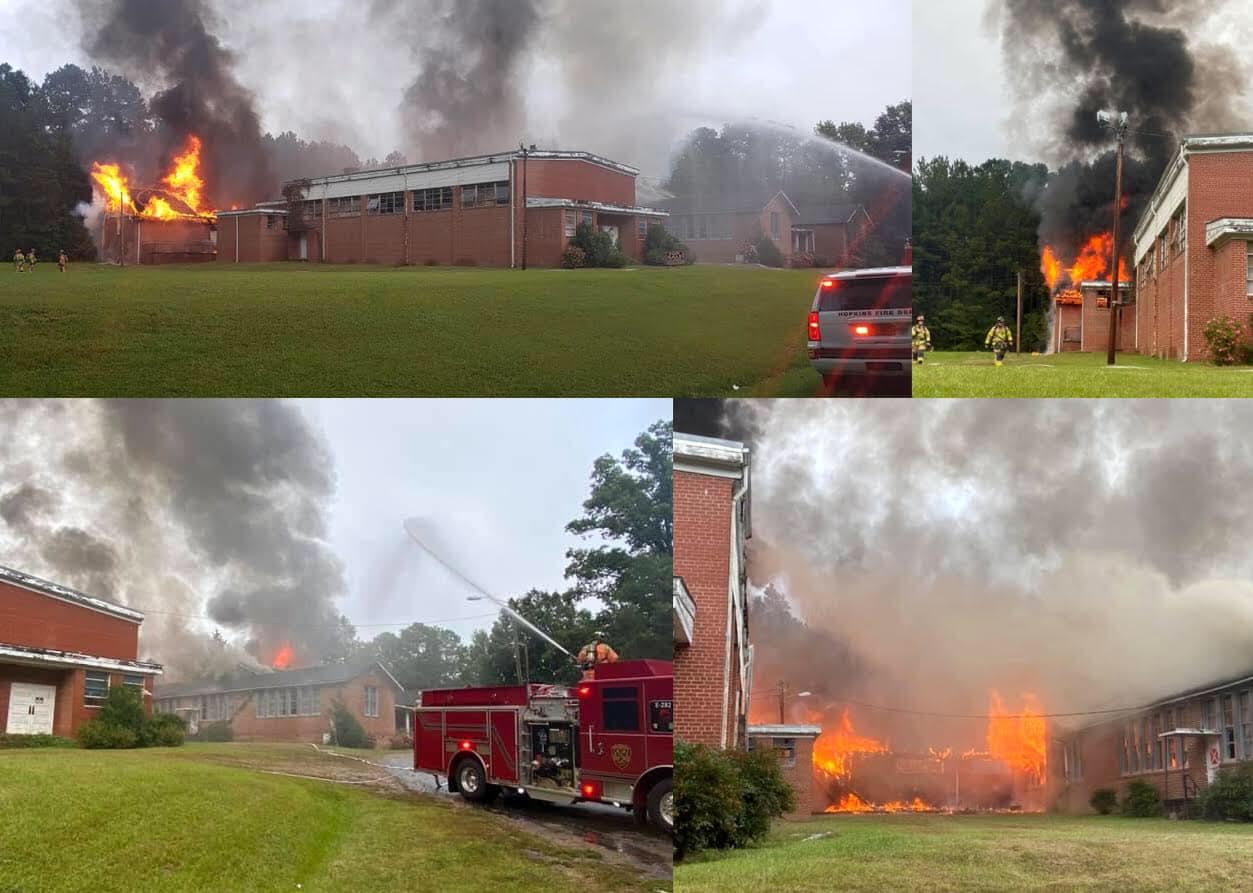 Water-shuttle operations, with [five] drop-tanks in two locations, supplying a NHFD engine on the west side, and WFD E112 on the east side, boosting WFD E112 in rear corner of the structure. Deck gun(s) and portable monitor(s) used, plus numerous hand lines. Rolesville aerial deployed for observation. Controlled 6:49 p.m. Crews remained on scene for another three hours or so.

How many alarms, or alarm equivalents? I guess… two or three, plus the tanker requests. 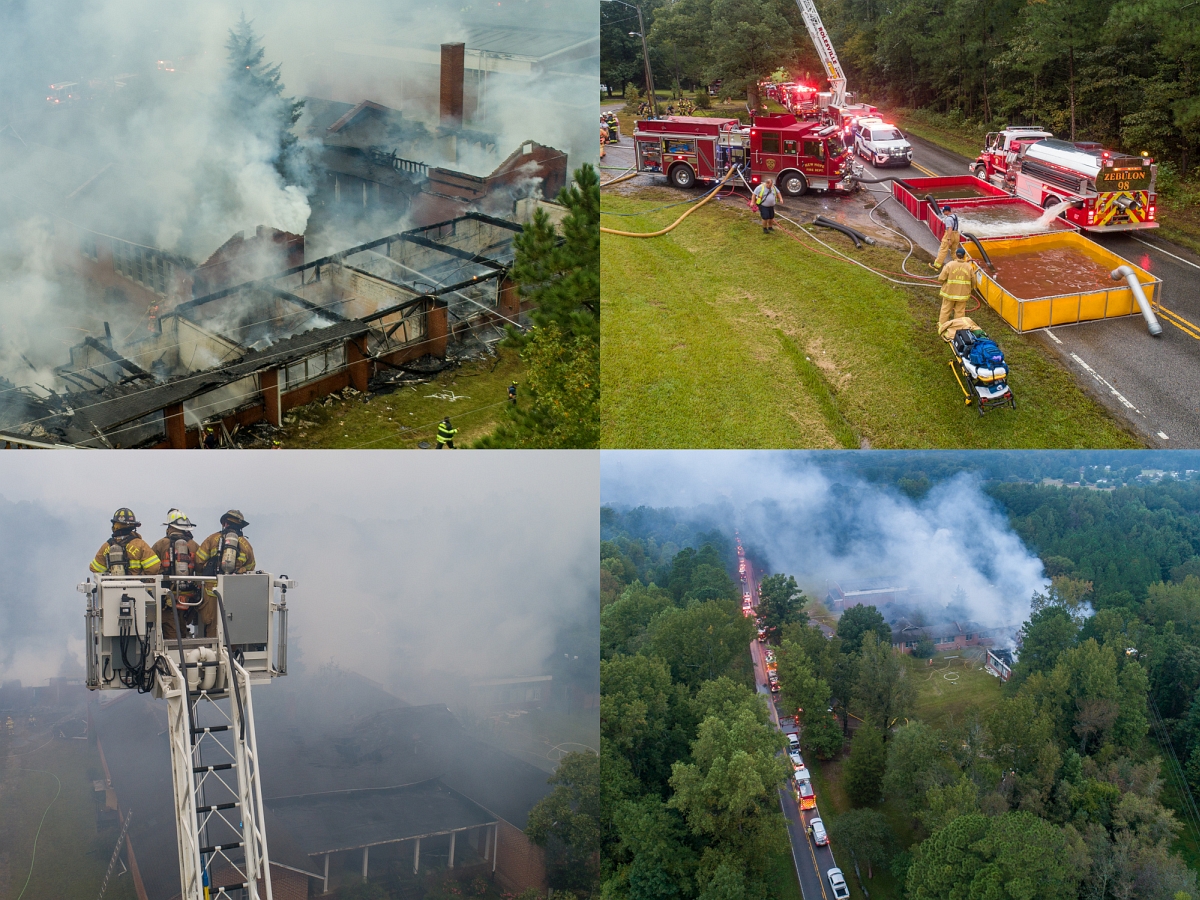 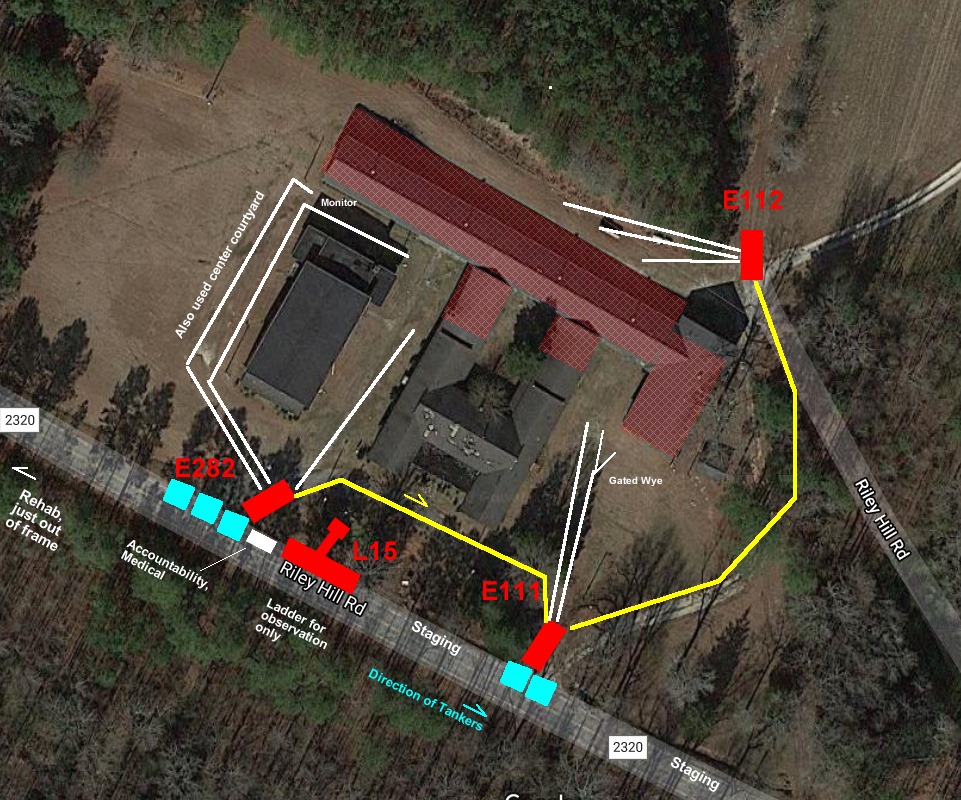 (Unsure if some units were diverted as coverage, or swapped.)