The Seagate (also spelled Sea Gate) Volunteer Fire Department in New Hanover County, outside Wilmington, was formed in 1940 to protect of the fishing community to help protect along Bradley Creek and Greenville Sound. The first apparatus was a 1931 automobile with three drums mounted on the back and a fan belt-powered pump. The first (?) fire station location was 122 Sebrell Avenue. The department moved in 1955 to 6012 Oleander Drive. 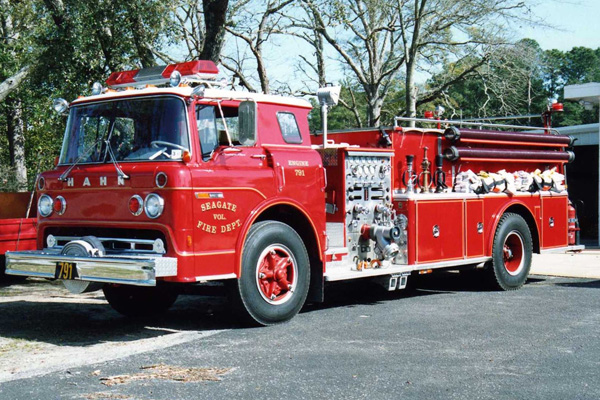 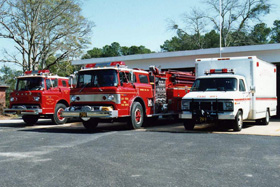 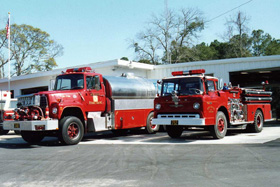 Pictured left to right, top to bottom are:

The Seagate fire district was eventually impacted by city annexation. In 1985, over 55 percent of their district was consumed. In 2005, the remained was annexed and they ceased operation and dissolved the corporation. Here’s the plan they filed with the Secretary of State, with their articles of dissolution.

Dissolution of the corporation authorized on August 16, 2005. Effective upon filing on December 5, 2005.

The corporation was incorporated March 29, 1956 as a volunteer fire department in New Hanover County and has existed as such, providing fire protection for the residents of New Hanover County since that date. By the summer of 2005, the City of Wilmington had annexed substantially all of the area previously served by the department, providing fire protection services through its own fire department. At that time, the decision was taken by the directors, officers, and members of the corporation to terminate the corporate business and dissolve the corporation. In general terms, the plan so approved calls for the liquidation and disposal of the corporate assets and distribution of net cash proceeds therefrom to certain local churches which have been supportive of the department during its existence.