What have been the worst wildfires in our state’s history? Either in recent decades or way back when? Below is a “worst one” from 1985.

Let’s look back at another series of huge wildfires in western North Carolina. From the Raleigh Times on April 5, 1984, found while doing some local fire department research. List format, of course: 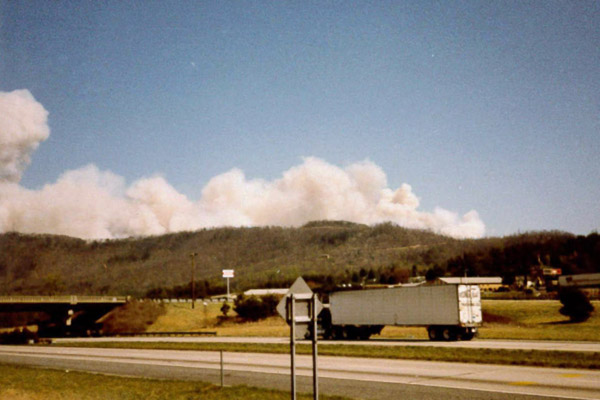 Smoke seen from Interstate 40 in Burke County. Courtesy News-Herald, from this April 2015 retrospective

See this News Herald story from April 2015, remembering the High Peak Fire in Burke County, one of the blazes noted above.

The fire resulted in the development of a program utilizing inmates as firefighting resources. Notes the introduction to this legislative report on the Young Offenders Forest Conservation Program (PDF):

On April 4, 1985, within a one-hour period, three large wildfires broke out in the foothills and mountains of Western North Carolina. These fires, along with numerous smaller fires, destroyed thousands of acres of woodland and more than forty homes and outbuildings. The High Peak Fire destroyed 27 structures and 5,000 acres of woodland in Burke County alone. Resources were stretched to their breaking point and often unavailable.

Following the devastating 1985 fire season, the North Carolina Division of Forest Resources began exploring ways to supplement their wildland firefighting capabilities. After visiting an inmate program in Washington, and researching programs in California and Utah, the Division of Forest Resources, in conjunction with the North Carolina Division of Prisons, developed the concept of the BRIDGE Program. The concept focused on the training of inmate crews to be used and readily available when needed to suppress wildfires.