Wilkinson Boulevard was the first rural fire department in Mecklenburg County, and one of the first rural departments in North Carolina. Its early history is recounted in a 1951 newspaper feature and a 1948 souvenir booklet.

On May 22, 1951, the Charlotte Observer featured a full-page profile of the county’s then-five rural fire departments: 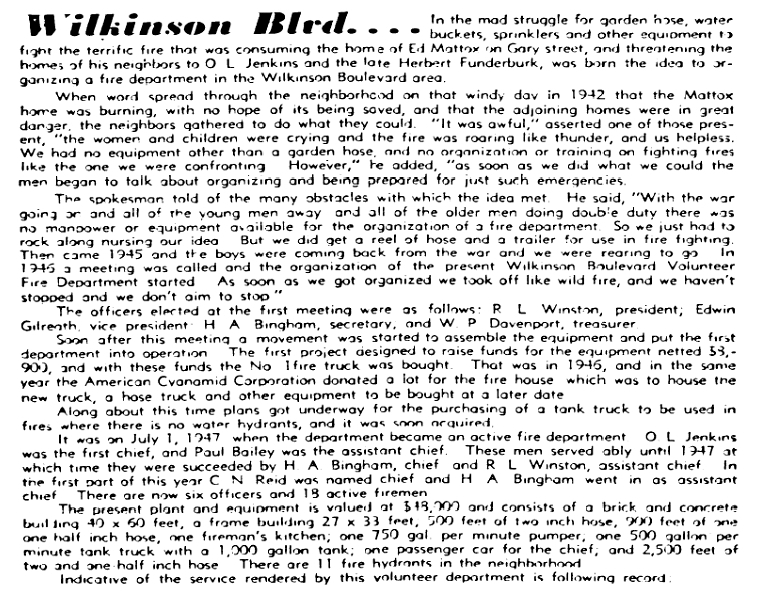 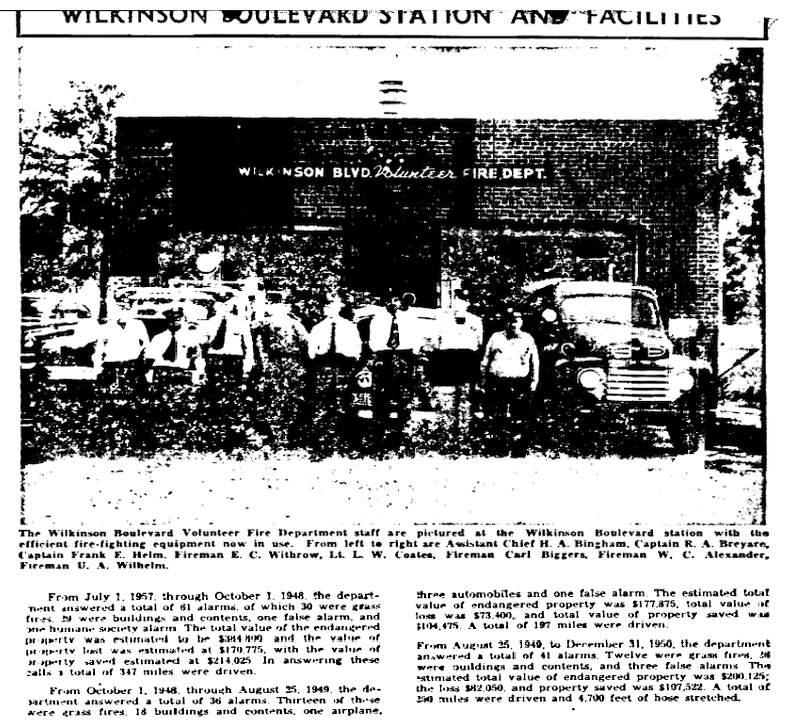 In 1948, the Wilkinson Boulevard Fire Department of Mecklenburg County published a small souvenir booklet. It contained a history of the department, which was the first rural fire department in the county. The early milestones included:

Read the booklet (PDF, 3MB), which is transcribed below: 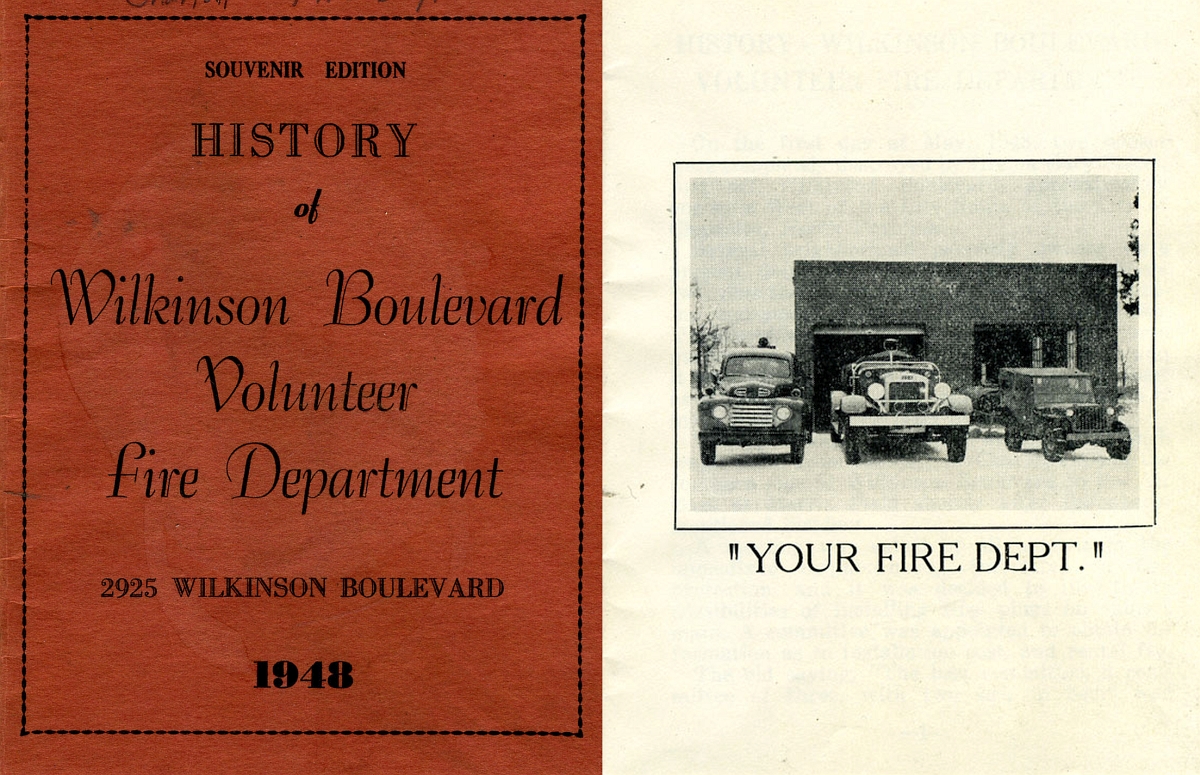 On the first day of May, 1943, two houses were completely destroyed by fire on Gary Street, just off Wilkinson Boulevard, approximately one mile West of the City limits of the City of Charlotte, North Carolina.

Several neighborhood property owners were present, doing what could be done to save these two, plus the adjacent houses, with no fire fighting equipment other than [three] [four-inch] garden hoses.

Unbelievable success was achieved with these garden hoses in saving adjoining property, and it was discussed at length by three men present as a comparison to what could have been done if more equipment had been available.

The government completed an eight (8) inch water main from the City of Charlotte along the southern side of Wilkinson Boulevard to the Air Base at Morris Field shortly after the above-mentioned incident.

A meeting was called of all persons in the immediate neighborhood, interested in fire protection, and it was decided to investigate possibilities of installing fire plugs on subject main. A committee was appointed to obtain information as to installation cost, and rental fee.

The old saying, “The best committee, a committee of three, with two sick in bed,” was negative in t his case. The plugs were installed with no money on hand and with no money promised. Each plug was assigned a caretaker and it was up to these two men to obtain initial cost, plus rental fee, from the people.

It was found after installation of plugs, that hose and nozzles were needed if water was to be transferred from the plugs to the fire.

A meeting was called to discuss the problem of hose. It was immediately decided at this meeting that a name was badly needed for the organization, and after much discussion, the Wilkinson Boulevard Volunteer Fire Department name was decided upon. An election of officers was held, with the following men elected:

The Fire Chief was instructed to buy 400 feet of 2½” single jacket fire hose and two (2) nozzles.

After purchase of hose, it was decided by the group that one-half the hose be kept at one place with nozzle, and one-half to be kept at another, close to each of the plugs. A hydrant wrench was not to be had at any price, however, the City Water Department was kind enough to loan one, to be kept until such time as the purchase of one could be made.

Another meeting was called and it was decided that monthly meetings were in order until unit was in good operating order. Plans were made to raise money to cover the indebtedness incurred, which at this time amounted to some $425.00. A fire fighting group was organized and a plan worked out as to membership and dues. The organization seemed to be on the road to success when the question of liability arose. Each person present realized the problem at hand, but no one dreamed of the prolonged agony in store before the problem could be solved.

Several members contacted responsible county officials and were told that incorporation was the only available way of protection against liability. This advice was brought out in a called meeting, but the cost was too great for the small number interested, so the battle continued.

For the next few meetings nothing could be accomplished because all suggestions and recommendations would invariably lead to liability.

Practically all persons lost interest and a period of six to eight months passed with nothing being done.

By the fall of 1946, several young men had returned from service. With this idea in mind the president called a meeting, hoping to re-create some interest, at least in the younger set. It was decided at this meeting that a meeting be called during the first week of January, 1947, and elect new officers.

Much response was enjoyed and a new group of men were voted to run the organization for one year, with their term ending December 31, 1947.

The following men were elected to 0office:

A two-wheel cart was discussed to be used in hauling the hose from the existing location to the fire. After some discussion this possibility was abandoned, and a trailer purchase was decided upon. Cars with trailer hitches were to be used in pulling the trailer.

Permission was granted by the owners of a lot, the southeast corner of Crestwood Avenue and Wilkinson Boulevard, to build a building to house the trailer, and hose. A building 12′ by 24′ was erected one Saturday by volunteer labor from the neighborhood.

The thought occurred shortly after completion of the above building, that we should be able to purchase a Fire Engine from War Assets at a price which this small group could afford. This project was assigned to a committee which came up with favorable reports. The steering committee immediately started functioning, and the idea of having a benefit show with the grand prize of a new 1947 Ford, surmised. A 1941 Army Holabird Fire Engine was secured from the Government at a very good price and the money was borrowed from a bank with several members signing the note.

Now the Fire Department was equipped with the fire equipment fought for so hard, but a fairly large bill was staring all hands in the face. With the cooperation of all the members of the Department plus many public service minded citizens in Mecklenburg County, the benefit soon proved to be a huge success. Enough money was realized from this event to pay for the fire truck, plus enough to build a sizable fire station, provided corners were cut.

The liability and financing problems had been carried to one of our State House of Representatives, and with his efforts plus those of other Representatives and Senators in Raleigh, a bill was passed giving Mecklenburg County the power to hold an election in any fire zone in the county, taxing the people and spending $18,000 for fire purposes in the set zone. This was certainly a step forward in Volunteer fire fighting in North Carolina.

Another committee had been functioning during these busy times. The papers were properly drawn by the County Attorney, and the Wilkinson Boulevard Volunteer Fire Department was incorporated. Hence, one of the greatest obstacles confronting the department had come to an end.

A lot located at 2925 Wilkinson Boulevard was very generously donated to the Department and a fire station 30′ by 60′ was built. Fires were not too frequent, however, several calls were answered during these times, and much property saved.

Financing, the major problems since securing the fire engine, was overcome time and again by various projects, these on the spur of the moment.

January, 1948 came along and time for election of officers was at hand. The nominating committee recommended to a general meeting group, that the 1947 officers be re-elected. This recommendation was voted upon and accepted.

Shortly after the election of officers a fire which occurred on Remount Road convinced several members that water carrying equipment was badly needed. The Department immediately bought a 1948 Ford Truck, equipped it with a thousand gallon tank and a 500 gallon per minute pump, which is another fire engine in itself. It is felt by most persons interested in the fire extinguishing business that this type of equipment is the best available in combating fire where there is no available water.

Money was needed to pay expenses incurred in obtaining and equipping the above mentioned truck, and the steering committee decided upon a Bar-b-cue to be held February 7, 1948, at the Fire Station. This event was a success as was the benefit show held some 15 months before.

The foregoing history as related sounds as if ideas were thought of, and bang!, they were completed. Such is not the case. Much hard work has gone into the Wilkinson Boulevard Volunteer Fire Department, Inc., and the organization is greatly indebted to a few individuals in the department who have so graciously given so much of their time. Also our t hanks go out to the businesses in the community which have helped so faithfully.