Here’s a history of American LaFrance steam engine #496, built in 1904 for Greensboro, NC, and later owned by private collectors in North Carolina and Florida, and finally residing at Cedar Point Amusement Park in Ohio. The restored steamer is being auction. This text and these images were copied from the auction listing. 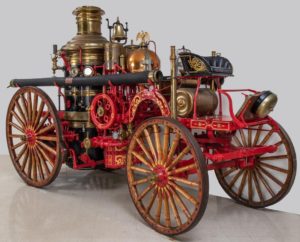 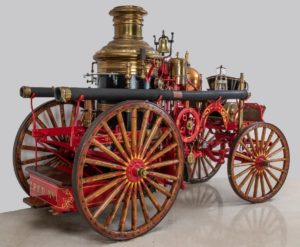 “This engine is a double steam cylinder, double water pump machine, known as a Second Size Steam Fire Engine, which would pump 750 gallons per minute at a pump pressure of 120 pounds per square inch. It would supply easily three large fire hoses of 2 1/2 inch size with nozzles of 1 1/8 inch opening. It was drawn by two horses, stabled in the fire house with the engine. These highly trained animals would go to their places ahead of the engine by themselves on the sounding of an alarm. A fire alarm received by telegraph from a corner fire box would automatically sound a bell, turn on the lights and release the horses from their stalls. The horses and men would run to the fire engine and with a few quick snaps of the suspended harness, the horses were hitched and the engine would swing out of the station on its way to the fire within 25 seconds of the sounding of the bell. The fire box of the big boiler was prepared with a fire ready to light and the boiler would raise operating steam in three minutes from cold water. At the fire the pump was connected to a water supply and the big steam engine would soon be pumping fifteen barrels of water every minute on the fire. Greensboro firemen used this four ton machine from 1904 until the 1920’s in everyday service and thereafter used it on big fires through the 1930’s as a reserve engine. It was last pumped about 1940. 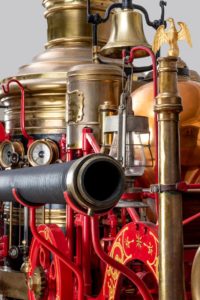 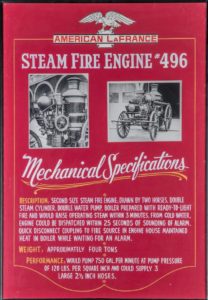 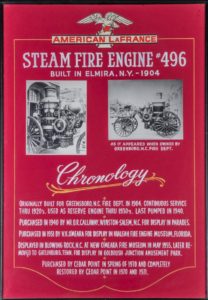 “It was purchased by Mr. D.R. Callaway of Winston-Salem, North Carolina, who used it for parades for several years and then sold it to Vincent K. O’Meara of Hialeah, Florida in August of 1951. It was on display in the Hialeah Fire Engine Museum for nearly four years and in May, 1959 it was moved to the new O’Meara Fire Engine Museum at Blowing Rock, North Carolina, where it was displayed until its removal to Gatlinburg, Tennessee in 1966. It remained there until it was acquired by its present owner for display at Cedar Point, Sandusky, Ohio in June of 1970.

“This fine machine was completely restored by Cedar Point in 1971 and was in a portion of the Town Hall Museum as a permanent display. Careful consideration was given to the original decoration and the colors used in the restoration and every attempt was made to strive for authenticity. The machine is decorated in red, gold and black and nearly all its original parts, valves and nameplates are intact.

“A brass bell identical to the original one furnished on the machine was added to it, as well as a pair of authentic Dietz-King fire department lanterns.’