What did the “hooks” look like on the original hook and ladder trucks? Master historian Matt Lee included this picture in his 1997 book “A Pictorial History of the Fire Engine – Volume I.”[1]

It’s one of the best pictures and explanations that I’ve come across. Note that there are two of them, a curved hook and a flat hook. That’s a Seagrave factory photo, undated. Probably 1890s? Horse-drawn ladder truck with “T. F. D.” on the side. 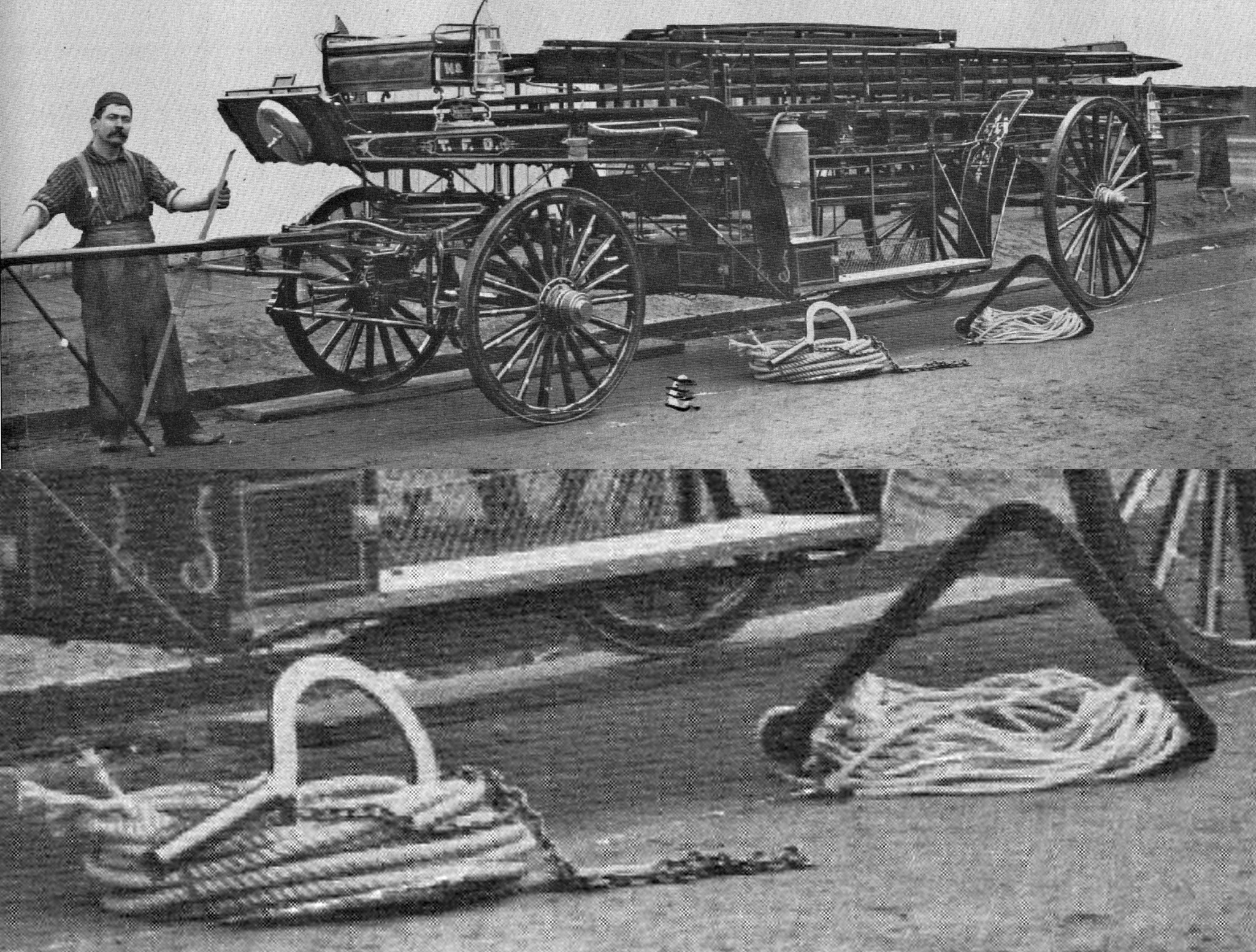 He described the hooks as such:

“The curved hook is for pulling down buildings or portions of buildings in order to create a fire break. In the early days of wood buildings and row housing, the only way to effect a fire break was to tear down a dwelling or out building. The curved hook had ten feet of chain attached to it. At the end of the chain was a length of stout rope. The hook had a hollow handle so that a pike pole could be used to position the hook and chain on a burning structure. The end of the rope was attached to a team of strong horses and the building was pulled apart to facilitate a fire break.”

“The flat hook, with a pulley in its base, was for hoisting items over a roof or wall.”

Collapsing buildings to create fire breaks was a tried-and-true technique of early firefighting. Yours Truly wrote this about Raleigh’s volunteer Hook and Ladder Company, in an earlier retrospective:

“As most of the home of the time were constructed of wood, flames could easily jump between buildings. One method of preventing fires from spreading involved the using a “hook.” This large grab hook was attached to about fifty feet of chain and another hundred or more feet of rope. Members would throw the hook through a window and, with all hands helping, they would pull down the house. This was rarely done, however, with the property owner aware. Their fire company even had a slogan about this displayed on a big sign attached to their truck. It read “Say the word and down comes your house!”[2]

Explosives were also to blow up buildings and create breaks in the path of a spreading conflagration. Local examples abound.

In 1803, the City of Raleigh Commissioners were granted “full power to do what they may deem necessary to stop the progress of the calamity, even to the causing of adjoining buildings to be taken down or blown up, without being answerable for any damage to the owner or owners of property so destroyed.”

This method was used to help control the first major fire on record, that destroyed 51 buildings in the first two blocks of Fayetteville Street on June 11, 1816. “In [the fire’s] course northwardly, it crossed a street 66 feet wide; and was arrested finally by blowing up Mr. Stuart’s kitchen and by throwing water continually on his dwelling house, under cover of some trees” wrote the Raleigh Register account.

And 112 years later, during the great fire of New Bern in 1922, nearly 100 homes were dynamited, as well as six houses along Queen Street that were “pulled down by a large cable” attached to a steam locomotive, was was recounted by Dr. Joseph Patterson in a historical presentation in 1992, for the Memories of New Bern Committee. Read that transcript at newbern.cpclib.org/research/memories/pdf/Fire.pdf

Readers, what historical examples of fire hook or fire break blasting can you share?

[1] Mr. Lee has written three volumes of his pictorial histories. They were self-published in 1997 (Volume I), 1999 (Volume II), and 2005 (Volume III). They are easily the best books on fire apparatus history, totaling some 1200 pages of crisply reproduced photographs and expert explanations and presentations of the histories.