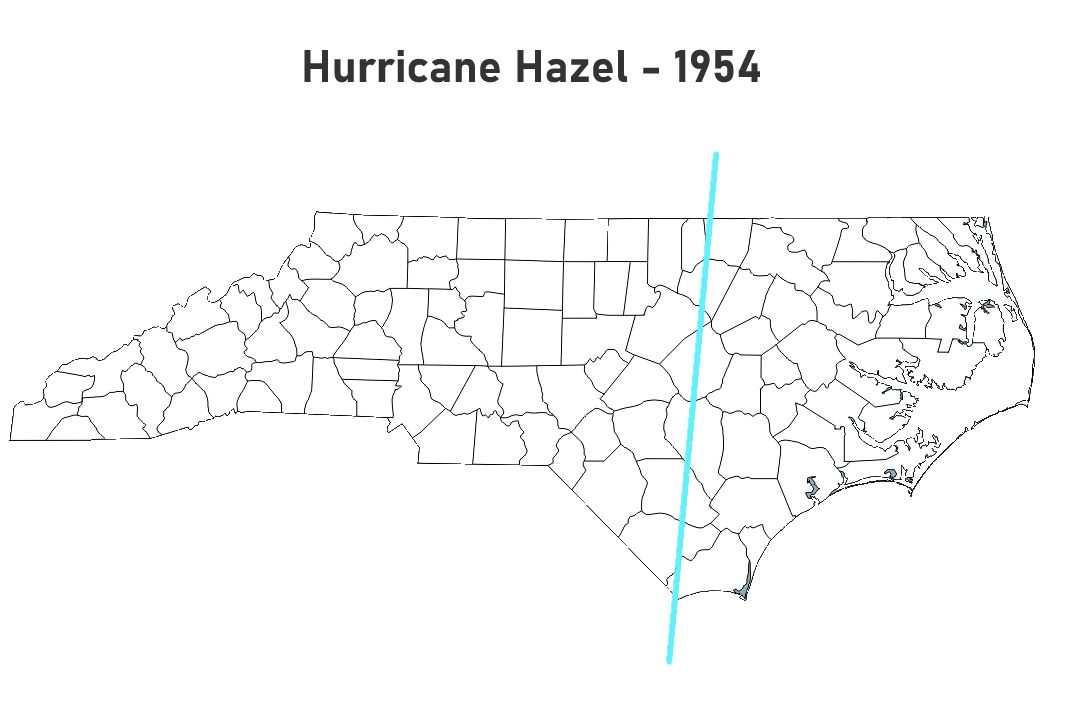 In October 1954, a much smaller version of the Raleigh Fire Department answered dozens of calls as Hurricane Hazel passed across the state. The department–with seven engine companies and two truck companies–had one of their busiest weekends ever, said newspapers.

For four decades, Hazel was recognized as the benchmark of tropical weather in this part of the country. Hurricane Fran passed that benchmark in 1996. What did the fire department response look like, when Hazel blew through Raleigh?

Raleigh firemen experienced one of their busiest weekends as a result of damage wrought by Hurricane Hazel.

The following telephone calls were answered on Friday:

As for the size of the Raleigh Fire Department in 1954:

On October 15, 1954, Hurricane Hazel made landfall in Brunswick County, NC. It was the eighth Atlantic hurricane that year. The storm surge at the coast was the greatest in the state’s recorded history. It struck at the exact time of highest lunar tide of year. The coastal regions of the state received some of most destructive winds ever, with estimates in several locations of 150 mph gusts. At Raleigh-Durham Airport, gusts to 90 mph were recorded around 1:30 p.m.

In North Carolina, nineteen people were killed and over 200 were injured. Destroyed were 15,000 homes and structures, along with 39,000 structures damaged. Total of 30 counties had major damages. The total estimated property losses were $136 million. The totals for the United States, Canada, and Haiti combined were over 600 people dead and an estimated $350 million in property damage. Source: North Carolina’s Hurricane History, Third Edition by Jay Barnes, UNC Press, 2001

This is an updated version of a posting from August 25, 2011. An earlier version of this posting was published on FireNews.net on September 26, 2003, after Hurricane Isabel passed through the Carolinas.