July 1
At midnight, Stony Hill Fire Chief A.C. Rich gave the final broadcast of the Stony Hill Rural Fire Department, as they signed off effect at 00:00 hours, and began operation as part of the new Northern Wake Fire Department. Listen to that radio traffic.

They’ve created a new Facebook page, and a new Twitter account. They have a neat new web site, and have published a video slideshow on YouTube. On Thursday, they also issued a press release (PDF).

Media coverage has started, with stories from WTVD on June 8 and the News & Observer[1]. 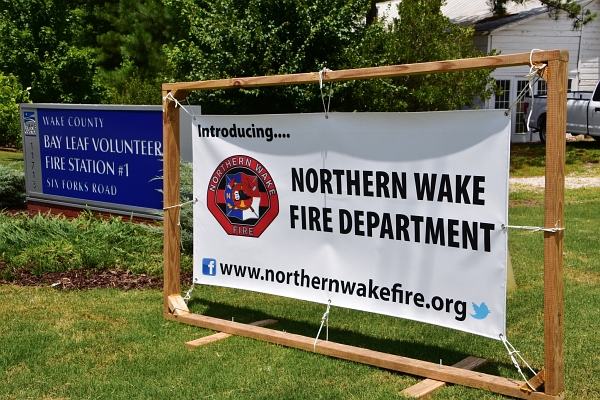 NWFD will operate from five stations with 28 pieces of equipment and 147 members. They’ll cover a 70 square-mile area that’s north of Interstate 540 and west of Wake Forest. They’ll be protecting some $6.71 billion of property, and some 33,000 residents.

Their fire tax district has been newly created, combining the old Bay Leaf and Stony Hill fire tax districts, and with some adjustments with land gains/losses to Durham Highway and Wake Forest’s rural district, based on closer unit responses. See this map (PDF).

Lee Wilson has been busy photographing their apparatus and stations, over the last couple of weeks. See his pictures in these two albums: NWFD 1/3/5 and NWFD 2/4. 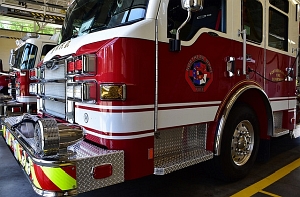 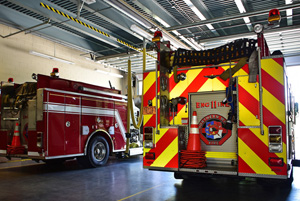 Here’s a collection of documents about the new organizations. Thanks to Chief Pope and his marketing committee for providing these and other information: 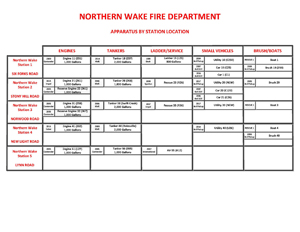 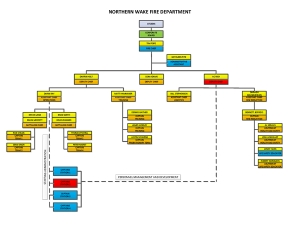 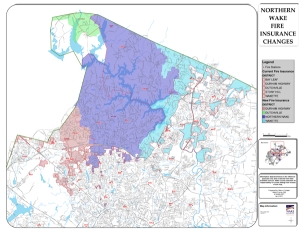 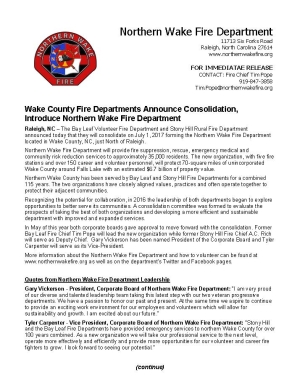 Over a Century of Service

Northern Wake Fire Department has a rich legacy, 115 years of combined service to the Bay Leaf and Stony Hill communities of northern Wake County. They were two of the earliest rural and “suburban” fire department created in Wake County.

There’s also another 46 years of history in the mix, from the Six Forks Fire Department, which merged with Bay Leaf FD in 2002. Six Forks was the first suburban fire department in Raleigh. See this prior blog posting with my family tree graphic.

Read histories of their departments on my Raleigh/Wake County history pages. Below are details on their station numbers and locations, and their fleet, which is newly numbered with a two-digit system replacing the earlier three-digit schema.

There’s is the second consolidation of two departments in the county’s history, after Yrac and Fairgrounds joined and formed Western Wake Fire Rescue in 1999. See below for a historical perspective on mergers and consolidations. 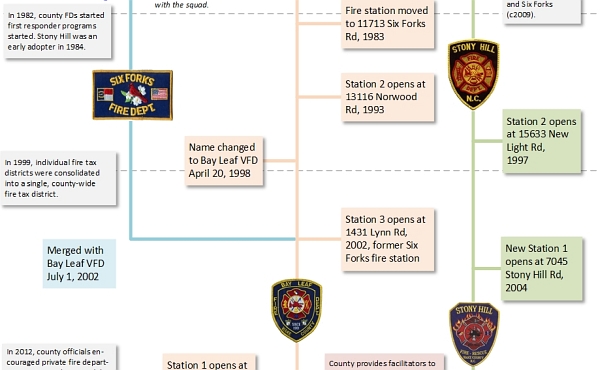 Incoming Swift Creek and Rolesville tankers are part of a county-wide fleet changes enacted in the spring, and that included removal of county-funding for the retiring Bay Leaf apparatus listed below. They’re owned by and will be sold by the corporation.

What mergers, consolidations, and re-organizations have happened in Wake County, over the decades? Here’s your history:

But wait, Batman, what about the various municipalities and their town/rural mergers? Those were: