Acknowledgements: Thanks to a bunch of folks, who helped me gather information as this incident was unfolding yesterday. It takes the proverbial village.

Two alarms were struck and many additional units were dispatched at an apartment fire early Saturday evening, located behind Crabtree Valley Mall. And alarming quite a few folks who saw the column of smoke rising from the area of the mall. Most of the state was under a “red flag” fire warning. In Raleigh on Saturday, the high was 52 degrees, with 10 mph winds during the day. Max wind speed was 25 mph, with 43 mph gusts. Dry conditions all around, with 0.35 inches of rainfall since April 1. Source.

Engine 16 arrived at a two-story (on stilts), wood-frame, garden-style apartment building with twelve-units and 12,024 square-feet. Built in 1980 and “L shaped.” Was cited as “two buildings” in radio traffic. Entire building was “heavily involved in fire.”

Engine 16 connected to a hydrant upon arrival, and “laid in wet.” They deployed their portable monitor to the rear of the building, for a brief period of offensive operations. Within minutes, the first collapse of the building was observed on the “D” side. (They also observed fires on the ground advancing toward an adjacent building. Police officers assisted, bring a number of dry chemical extinguishers they located on premise, and helping to halt the spread on that side.)

The second alarm was requested within minutes, with a total of seven engines, two ladders, a rescue, and three battalion chiefs soon on scene. Command was located about halfway into the complex on the main road. Battalion 3, then Car 20, then Car 2 assumed command.

Ladder streams, ground monitors, and hand lines (including using a manifold valve) were deployed, and additional water supply sources were established. As well as alternate sources, as some of the hydrants were inadequate for pressure. Defensive operations were soon initiated, with crews protecting exposures from the fast-moving, wind-driven flames.

Sections of the building continued to quickly collapse. The entire structure was “on the ground” within an hour. Two passenger cars were also consumed, and a couple others were damaged by heat. Additionally, a tractor-trailer in the parking lot was also damaged. 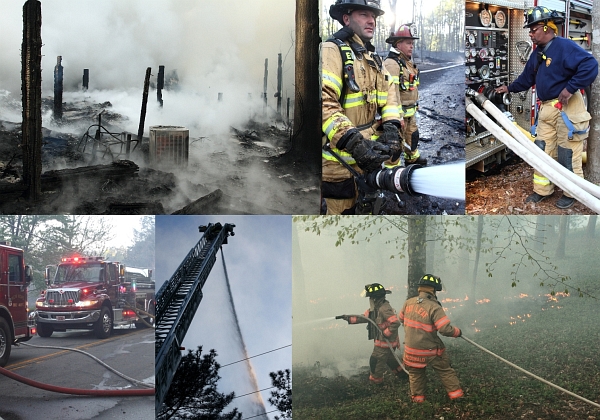