This is a re-posting of a Legeros Blog Archives posting from December 7, 2009, that’s no longer available on the old site, due to technical problems.

On Sunday, September 28, 1980, fifteen ambulances assisted with moving 170 patients from Rex Hospital on St. Mary’s Street to their new location on Lake Boone Trail.1 Teams of doctors, nurses, rescue personnel, and other volunteers assisted. The big move started at 7:04 a.m. when a specially fitted transfer truck was loaded with two patients in complicated traction arrangements.

Patients David S. Bostic and Paul N. Humphreys Sr. arrived at the new location 15 minutes later, and had expected to be admitted in the new facility. But they were beat by Jane Waring H. Wheeler, a mother-to-be who arrived from Louisburg. She got the drop, so to speak, two minutes earlier. Her daughter, Mrs. Wheeler’s second, was the first baby born at the hospital, arriving at 10:00 a.m. The night before, the last child delivered at old Rex Hospital was born at 9:04 p.m. on Saturday. 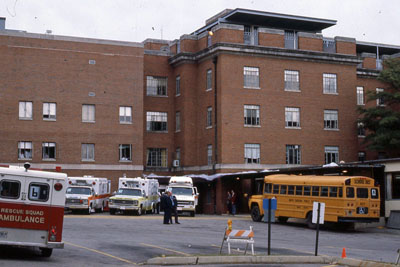 At 7:24 a.m., vans pregnant with mothers and babies started rolling out. From there, the stream was steady until just before 1:00 p.m. Huge sheets of plastic were also stretched across the roofs at each entrance, for temporary shelter in the event of the rain. The skies were gray, but the streets stayed dry.

Fifteen ambulances were utilized, and one suffered a minor mishap.2 An ambulance from Zebulon stopped working on Wade Avenue. The patient was transferred to another unit, and the Zebulon ambulance was quickly fixed. Fuel filter was the aliment.

Each patient and driver was accompanied by at least one ambulance attendant, plus a nurse, records, and personal belongings. The Raleigh Fire Department’s two rescue units were likely utilized, a pair of Chevrolet/Murphy ambulances of 1974 and 1975 model years. 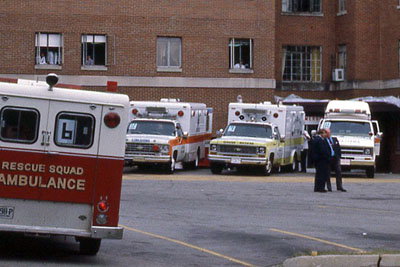 Stoplights on Wade Avenue at the entrance to the old hospital were set to flash, and police officers helped direct traffic. Special school buses helped transport those in wheelchairs. Said one ambulance attendant to a patient, “They’re going to be a little quick over here. It may make you feel like you’re on a roller coaster, okay?”

Each trip, cited driver Wallace Piper, took about eight to 10 minutes each. All patients were transported safely, with he last patient arriving at 12:46 p.m., some 30 minutes ahead of schedule. The first meal prepared at the new Rex cafeteria was fried chicken, for the culinary curious.

Rex Hospital is Raleigh’s oldest hospital, founded in 1894. The first location was on the present campus of Dorothea Dix Hospital. In 1937, the hospital moved to St. Mary’s Street. See present day pictures of the old hospital, now a state government building, including three shown below.

Note: This article was originally posted in December 2009, and has been updated with additional photos and a little more wit.

1The News & Observer reported 168 patients moved, while the Raleigh Times reported 176.
2Okay old-timers, what ambulance and rescue services would those have been? 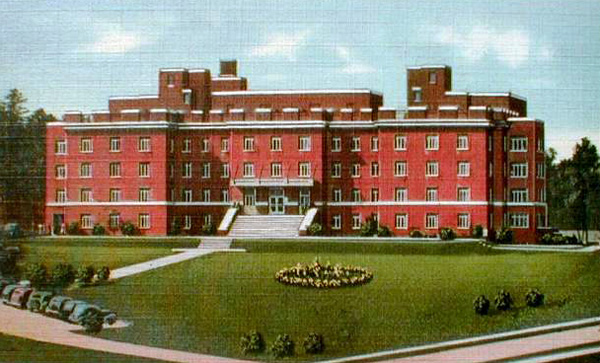 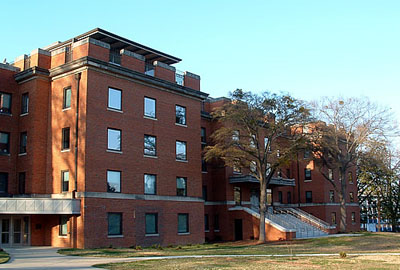 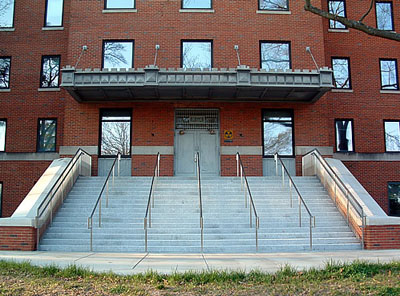 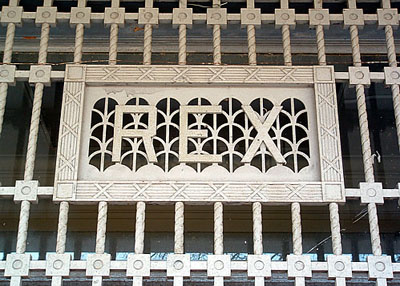 December 8, 2009 – lee
I was born at this hospital a few years before it closed.

April 27, 2012 – James
My born on date was 1967 @ T Rex. Rex did it all, every family member was there at one time or another. Same day surgery were non existent. So was allowing you to go up to see family when you were younger than 12? Gotta love those old Ambulances…Man those were the days and we didn’t even know it.

April 29, 2012 – Brown Wynne
ow, so people that were born there are still alive?? Who knew! Just kidding of course…gotta get jabs in on the “experienced” guys when you can!

April 29, 2012 – Bob
My great uncle twice removed on my step mothers side was seen in the old emergency room back when nurses wore cool hats.

April 29, 2012- Jason Thompson
DJ, thanks for naming the Cary unit in the pic – I had all of the other ones! My younger sister was born there on Sept 16, 1980 and my parents had to sign a transfer form in case there were complications so she could be transferred to the new Rex if needed.

April 30, 2012 – That was me
Was born there and was one of those babies that hitched a ride on the 28th from the old Rex, to the new one. Mom told me she was up all night because of the packing tape was loud as the put everything in boxes.