The Raleigh Fire Museum tweeted about this the other week. Let’s examine more closely in this blog posting. This is a vintage “rules and regulations” booklet from the early twentieth century. It was donated to the museum by a retired member of the department.

Here’s a PDF version of the booklet, as scanned by myself and posted to my history page. Or view page-by-page in this photo gallery. 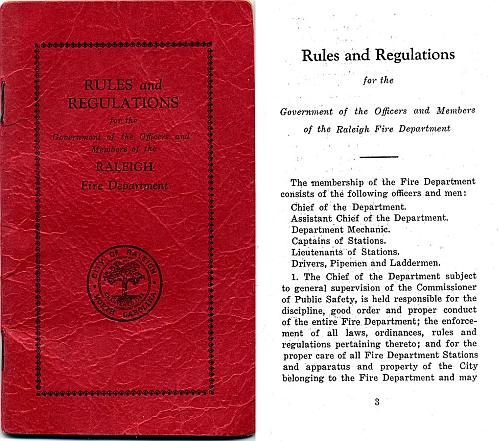 Look familiar? We’ve blogged before about a similar booklet from the Charlotte Fire Department. We’ll compare both in a bit. First, let’s look more closely at the Raleigh booklet:

“Rules and Regulations for the Government of the Officers and Members of the Raleigh Fire Department.”

Guessing 1920s or 1930s, but could be as late as late 1940s. Page 3 references the Commissioner of Public Safety. The city was governed by a Board of Commissioners until July 1, 1947. Thus the booklet is no older than that. There are also six pages of alarm box locations in the back of the booklet. They include streets in locations annexed between 1930 and 1949, such as the “far ends” of Glenwood Avenue as well as Whitaker Mill. Thus the booklet can be reasonably dated as between 1930 and 1947.

Page 23 references “appointees”. Fire department members were appointed positions until March 1, 1935, when they were granted civil service protection. Does that further narrow the scope of this document? Possibly. Was the verb “hired” used after that date, or were new member said to be “appointed” (as now based on competitive hiring). And/or, once that change was made, were all documents updated with revised language? Was this booklet updated or older terminology left in place. (Such as “hose carts” that are cited in the booklet and despite a couple decades since the horse-drawn era.)

How did those work?

Where were the radios?

How long were the alarm boxes used?

Here’s a blog post from 2009, feature a similar booklet from the Charlotte Fire Department. Gets me thinking that such booklets were perhaps replicated among urban fire departments. Maybe with help from the IAFF? Some observations: