The town of Cary opened a new fire station on Monday. The personnel of Engine 2 and Rescue 2 reported for duty at the newly completed Station 2 at 601 E. Chatham Street. They were transported to old Station 2 at 875 SE Maynard Road, and brought the apparatus to the new facility. Those are a 2006 Pierce Dash pumper and a 2012 Pierce Velocity walk-around heavy rescue. The 13,395 square-foot facility is a two-story structure and the town's second fire station with a pole. Or poles, plural. It's also their second station with accordion-style (also called bi-parting) bay doors. (They open fast. Within seconds.) Including land, design, and construction, the new fire station cost about $5.5M. A dedication ceremony is planned for Friday, December 18, at 11:30 a.m. [Read the press release.]

Upon the relocation of Engine 2 and Rescue 2 yesterday morning, old Station 2 became Station 9. The legacy facility will house Engine 9 until a permanent home is constructed at 1427 Walnut Street. The property is located at the corner of Walnut Street and Nottingham Drive. There's an abandoned church on the site, which the fire department has been using for occasional training. There's been $750,000 funded for the project thus far. Engine 9 was placed in service with Engine 6, relocated from Station 6 at 3609 Ten-Ten Road. Same is a 2003 Pierce Dash pumper that will be re-lettered when new decals arrive. Also yesterday morning, Ladder 6 was renamed Engine 6. They'll operating as a quint company with their 2008 Pierce Velocity aerial ladder. Additionally, Rescue 4 was moved to Station 6. Now Rescue 6, they operate the town's second 2012 Pierce Velocity rescue, which is identical to Rescue 2. What's the status of future fire facilities and apparatus in Cary? Good question! Looking at the town's budget documents, there's a ten-year CIP listing from a year ago. It's available on this page. Highlights include:

What's their current status? We'll ask around on Friday, at the dedication ceremony. Readers may have inputs as well. Also need a check on the makes/models/years of the apparatus listed above. See photos from Mike Legeros and Lee Wilson. Read prior blog postings about Station 2: 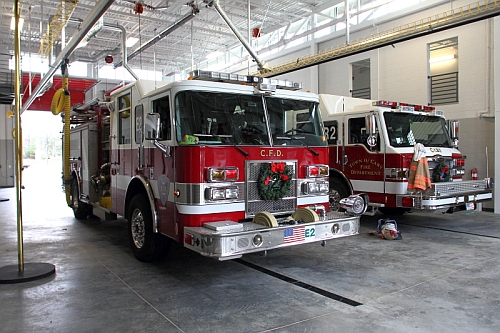 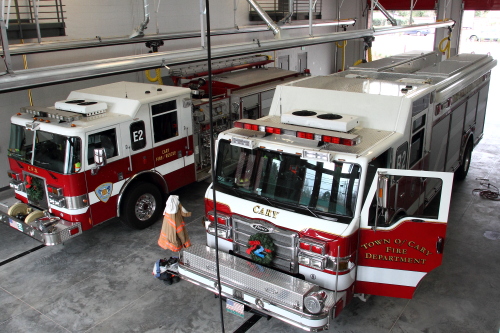