November 2019
Found in my files, excerpts from transcribed minutes of the Apex Volunteer Fire Department Inc., from 1956 to 1979.

Below are some highlights that caught my eye. See related historical photos in this album from the Raleigh Fire Museum: www.flickr.com/photos/raleighfiremuseum/albums/72157687765234902

Note, will be tweaking as any typos are found, or additional annotations needed. 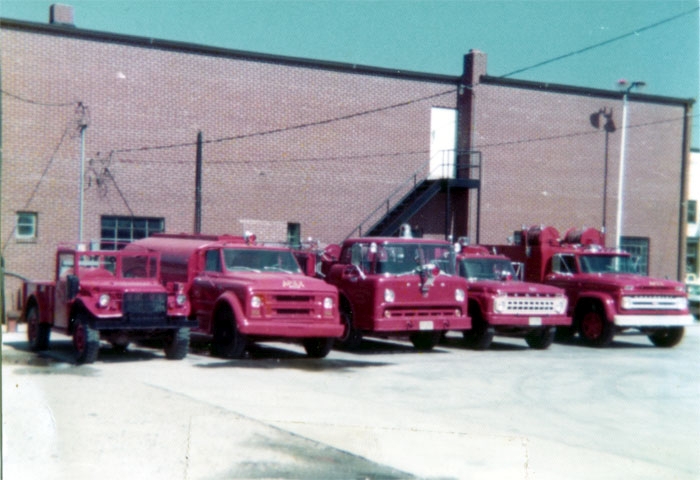 1956, Dec 3 – Civil defense report delivered. “Report was made on a civil defense tower. [Colonel] Hardeson was seen about a ground observer corp. Home Demonstration club offered their services to furnish observers to help man the post. The town will cooperate with us on the project.”

[ Legeros: A civilian defense observation tower was installed atop the fire station in 1957, with volunteers participating in the national Ground Observer Corps. Blog post about the tower and the corps: www.legeros.com/blog/cold-war-history-ground-observer-corps ]

1956, Dec 10 – Drivers required to fill gas tanks and check oil after every trip.

1957, May 6 – Department will receive twenty-five “World War I helmets.” Also, “The fire district will be three miles out on each from the fire house, in order to get better insurance rating.”

1957, Jun 3 – “Fire Chief’s car was brought over to the fire house by James Mason from Clark Chevrolet Company. Several of the firemen made a trial run on it.” Members approve purchase for $275.00.

1957, Oct 7 – County-wide meeting held at Raleigh Fire Station 1. Each fire department in county is supposed to “make a survey and inspection of every house in the Fire District as to defective wiring, etc.”

1958, Jan 6 – Voted to investigate buying property on which the fire station is located, and also 50 feet to the north of the station.

1958, Feb 3 – Report on radio system. Will have one base station and three mobile units.

1958, Apr 7 – Motion to have letter sent to each county fire department, suggesting a motion at the next Wake County Firemen’s Association meeting, that they appoint a committee to appear before the County Commissioners and request a $50 increase per month for fire department expenses.

1958, May 5 – Voted to purchase Scott air packs. Also, County Commissioners “want a report on what we are doing with [the] money [that] we get from them.”

1958, Sep 24 – Discuss by-law changes, which include changes in terms for officers and board members, that the Fire Chief and Assistant Chief oversee the department as a whole, but “mainly firefighting,” and the President and Vice President “oversee business aspects.”

1961, Aug 7 – Upon recommendation of state insurance commissioner, voted to split department into city and rural departments. With two separate alarm systems, increased membership to 37 members, one Fire Chief and two Assistant Chiefs, split the membership between the two, and create a “traffic division.”

1964, Jul 6 – Appeals board established new boundaries between Hipex and Yrac.

1965, Apr 5 – Recommendation to pay a few members to perform maintenance on equipment.

1965, May 3- Decided not to pay members for equipment maintenance to avoid tax issues.

1966, Jul 11 – Reported Town would begin contributing additional $600 per year toward departmental operations at start of next year.

1966, Oct24 – Voted to accept truck from Berringer Chevrolet, get estimates on “building tank” for the truck.

1967, May 5 – Executive Board meeting – Report on a meeting with the state insurance commissioner. For several years, the town Mayor(s) had been sent letters “as to the condition of the town fire truck” and required equipment for it. “Nothing had been done.” If not for the “outstanding job the volunteers were doing,” the insurance rates in town would’ve gone up. He recommends that the town hire one full-time firemen, but acknowledged that the volunteers have enough men during the day to provide sufficient coverage.

1967, May 15 – Town board expressed interest in the town possibly buying a new [town] fire truck, requesting that the department’s members work with them to create specifications.

1967, Jul 3 – Committee of volunteers selected to assist town with purchase of new [town] fire truck. Town has also requested the assistance of Sherman Pickard [who was working with NCDOI at the time, I believe].

1968, Jun 3 – Selected members were asked to meet with town commissioners about “riot control”. [ Legeros: This was during the years of civil unrest in many cities and towns. ]

1968, Jul 1 – Chief Connie Clayton [visiting] suggested that department members be alerted for calls by telephone instead of siren, so the public isn’t alarmed. Also, that firemen not use red lights, do not park personal vehicles in the street, do not answer fire calls without police protection, and stay in contact with someone at city hall by radio. [ Legeros: These sound like recommendations for operating during periods of civil disturbance.]

1969, Jul 7 – Presented, adopted list of suggestions on procedures “in case of riot.”

1970, Mar 2 – Voted to approve contract from town, for fire department to man the town’s fire truck.

1971, Jan 4 – Discussion about forming a rescue squad with assistance offered by Apex Funeral Directors and $125 per month from county.

1972, Jun 5 – Fire escape was ordered. [ Legeros: What was this? Manufactured external staircase for building? ]

1974, May 6 – Recommendation from county fire chief’s meeting to use ten codes on mobile radios to “reduce air traffic.”

[ Legeros: On that date, at a fire on/near old Highway 1, Engine 3 was  returning to town for more water when a woman, alarmed by the smoke, pulled her car into the oncoming lane. The apparatus driver swerved and the 1963 Ford/American LaFrance struck her car and flipped.  The firefighter was ejected and nearly killed. ]

1978, May 1 – Voted to present letter to town, requesting annual funding be increase from $5,000 to $12,000. Also, voted to send letter to all area residents, requesting financial support.