The News & Observer this week published an excellent retrospective of the B-17 bomber crash[1] in Garner on May 9, 1944. The Flying Fortress crashed into a wooded area around 5:30 p.m. near the intersection of Garner and Vandora Springs Roads.

Two crew members were killed, and either others parachuted to safety. The Raleigh Fire Department was notified, and sent two trucks to the scene. Fire Chief W. R. Butts was one of the first officials to arrive at the scene, along with Highway Patrol and military officials, who arrived about the same time.

The burning wreckage was spread over an area 600 yards long and 100 yards wide. Bombs and bullets continued exploding long after the crash. Spectators attracted the scene were warned to keep clear for fear of further explosions. 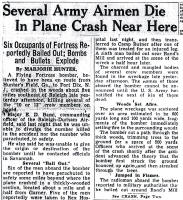 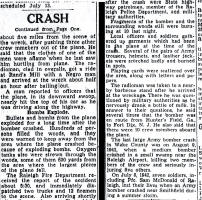 Need to see the stories from the subsequent days. And the official report would be neat to see.