The Chapel Hill Fire Department was established in 1896. Everybody knows that, right? Says so on their emblem. But what happens when historical records suggest, perhaps, something different? Let’s a look.

Starting in late spring, he commenced a deep dive into Chapel Hill fire history. He connected with the department historian (and his retired predecessor) and began an exploration, an expansion, a review, an audit, of their written history.

That is, everything about their past in find-able written form.

In the CHFD archives was a typed copy of town minutes, excerpted from 1896 to 1922. (Which you can read here.) They’d been transcribed by someone, some years or decades prior. And they’re some of the oldest municipal records about the department. Click to enlarge: 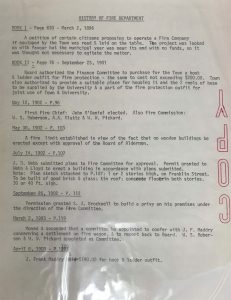 A petition of certain citizens proposed to operate a Fire Company if equipped by the Town was read & laid on the table. The project was looked on with favour but the municipal year was near its end with no funds, so it was thought not necessary to agitate the matter.

A fire limit established in view of the fact that no wooden buildings be erected except with approval of the Board of Aldermen.

The minutes continue with references to the fire commission conducting construction plans review (1902), acquiring a “fire wagon” (1903), electing a salaried fire chief (1903), finding a firehouse (1903), and so on.

A petition of certain citizens proposed to operate a Fire Company if equipped by the Town was read & laid on the table. The project was looked on with favour but the municipal year was near its end with no funds, so it was thought not necessary to agitate the matter.

Then what happened? Good question!

The town minutes didn’t record another action on fire protection until five years later. That’s when the town board authorized the purchase of a “hook and ladder outfit” in 1901. They also authorized finding a place to house the truck, and a pair of hose reels that the University would provide. The truck and the reels would be available for joint protection of the town and the college.

So what was happening between those years? Was any fire protection in place in town?

The next piece of the puzzle was uncovered in the Daily Tar Heel digital archives. They have 100 years of their paper available online and searchable. And Legeros found this in a story on September 15, 1893:

Legeros thus interprets as this as happened:

The first fire hydrants on campus were installed by September 1893. Subsequent hydrants were installed in town, also part of the University-operated system. How soon? Unsure. But by 1901, the University had (or was prepared to obtain) hose reels, which carried the hose, which was connected to the hydrants, which was used for fighting fire. (No hand- or steam- or motor-pumping fire engine required.)

Were hydrants installed in town by 1896? Was that action what precipitated some citizens to petition the town? Or were thinking of forming a “bucket and ladder” company. No hose, no nozzles. Just ladders and tools and a bucket brigade for fighting fire? Good question.

What do those town minutes tell us?

Letter to the Editor

The next clue was uncovered on Newspapers.com. That’s a paid service with searchable archives, and that contains numerous local papers published in the early 20th century. (Up until the public domain copyright period ends in 1927.)

In the Raleigh newspaper the Morning Post, August 6, 1903, appeared a letter from the Chapel Hill Fire Chief. Click to enlarge: 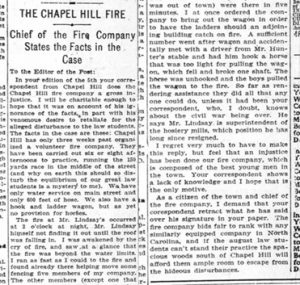 He was correcting the paper’s account of a recent fire, and the company’s performance therein. Most notable is this sentence:

Chapel Hill has only three weeks past organized a volunteer fire company.

We have only water service on main street and only 600 feet of hose. We also have a hook and ladder wagon, but no provision for horses.

Okay, so by August 1903, there were fire hydrants on Main Street. The fire department has hose, ladders, and a wagon for transporting. (Did they also have a hand hose reel? Or did this wagon have a hose bed? Could be.)

Back to our master list o’ facts, and expanding a bit:

Does all this mean that the Chapel Hill Fire Department was established in 1903, instead of 1896?

What Can We Conclude?

But what about the decade prior?

How could someone solve this one? Couple ideas come to mind:

No small project, there.

Maybe in a future year, Legeros will pursue. Maybe after he’s retired. When he has some real free time.

This story also demonstrates the tricky business of picking a department’s “start date.” But that’s another topic for another blog posting.