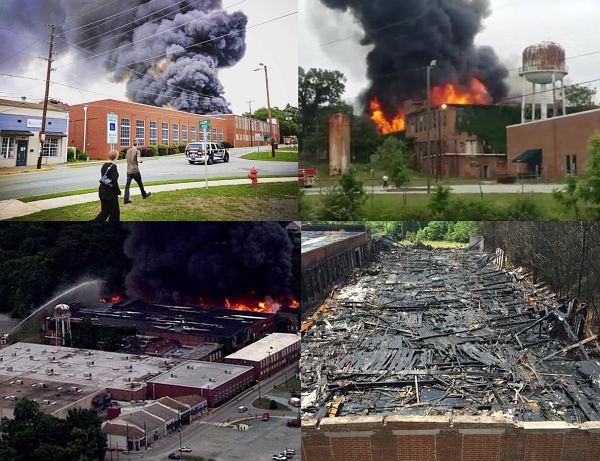 ORFD Ladder 1 (which is town-owned and thus lettered Hillsborough Fire Department) was deployed on Nash Street, and then relocated to a rear parking lot. Mebane Platform 38 was backed against the Nash Side of the building adjoining the burn building. (Was told it’s the first fire for the recently delivered KME mid-mount platform.) There was also a Chapel Hill ladder on scene, but it wasn’t deployed. A company of firefighters (Tower 73) responded with a reserve quint, a 2001 HME rear-mount short stick.

Portable monitors were deployed on the north side of the building, from an elevated ground position at roof-level, and from the west side of the structure, on the northwest corner. Exposure protection was also paramount, due to occupied commercial structures on the south end of the block (past the mill buildings) and residential structures (and a historic mill house) directly to the north. The inward collapse of the fire building’s roof aided this effort. The roof collapsed at about 5:25 p.m. 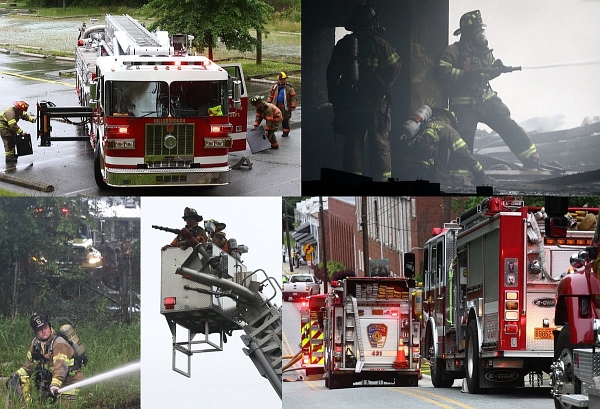 Crews also attacked the blaze from inside the adjoining structure, a three-story section of the mill building. Both it and the burn building were unoccupied. The mill buildings were last occupied by a fabric company, which closed its operations there in September 2000. The buildings were planned for development into apartments. The mill is both a local and national historic landmark. Its buildings date from turn of the 20th Century and the early 1920s.

The destroyed structure was a 30,000 square-wood weaving room addition that was erected in 1920. Here’s a page of history [link expired: http://freepages.history.rootsweb.ancestry.com/~orangecountync/places/cotton_mills/bvue.html] about the mill, and includes this diagram showing the sections of the building and their ages: 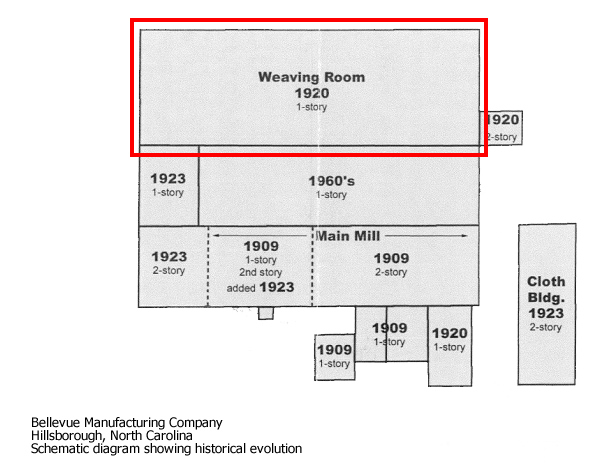 Eight fire departments were on scene: ORFD, Efland, Eno, New Hope, Orange Grove, Cedar Grove, Mebane, and Chapel Hill. How many firefighters? Good question! As many as a half-dozen hydrants were utilized, and included a special call to the town water plant, to boost pressure as needed. The fire was contained at 7:20 p.m. on Friday evening. All companies but a single ORFD crew were released about 10:30 p.m.

Crews continued working on Saturday, extinguishing hot spots and a large flare-up. The latter included a collapse of the building’s north wall against an embankment. Firefighters were working nearby, on a nearby hill. They were a safe distance from the structure, and weren’t affected. See the town’s press releases for ongoing details.