Bottom left is the 1939/1916 ALF ladder, which might’ve been Truck 6 by that time. Bottom right is the Raleigh Emergency Rescue Squad’s 1954 GMC panel van. (They were a two-piece company, also operating a 1954 Reo CD rescue.)

Since it’s June 1960 and a couple months after the city expanded to the west, let’s presume that’s Engine 8 from its temporary quarters on Method Road, and Tanker 1, also at Station 8.

At midnight on April 1, 1960, the second engine at Station 1 was moved to the rented house just north of Western Boulevard on then-named Kent Road. Engine 9 (as it was called) was renamed Engine 8.

The two tankers, meanwhile, were placed in service at Station 2 on April 1, and at Station 8 by May 19. The city operated the tankers until 1986. As the story goes, one of Chief Pickard’s early actions was retiring the tankers.

As for the ladder truck, that’s another mystery. It was moved to reserve status in 1953. And old-timers remember the thing at Station 6, because a back window had to be removed, ’cause the thing was so long. Was it Truck 6 for a stretch? Or maybe their regular apparatus, the 1922 ALF service truck, was in the shop. 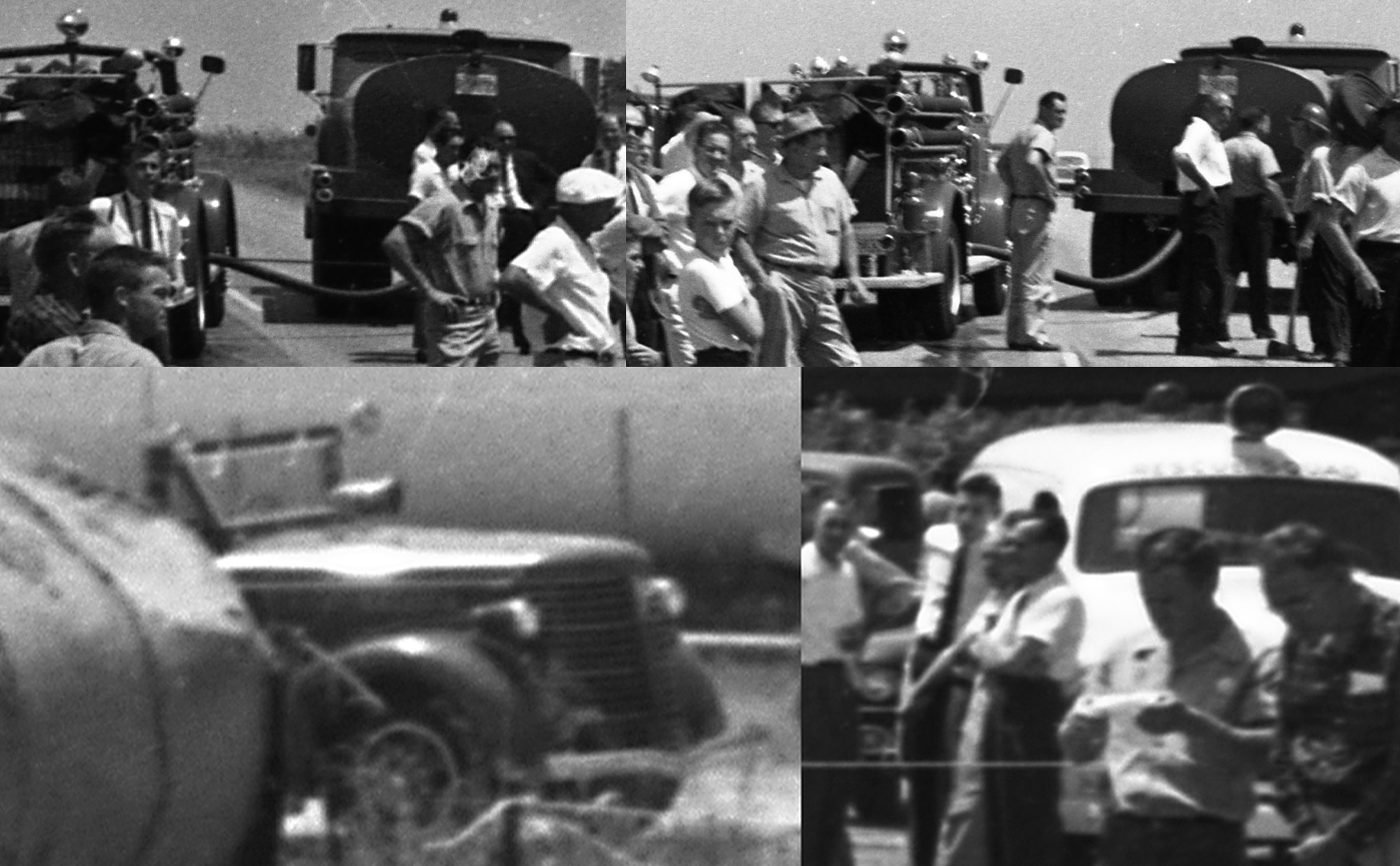 November 17
Locating a Line of Duty Death – Cary, 1960
On June 16, 1960, Cary firefighter Vernon Lee Thompson, 28, was killed, and firefighter Willis Edward (Billy) Henderson, 32, was injured, when their tractor-drawn tanker overturned outside Raleigh. Or, perhaps, inside the Raleigh, as the city limits had been extended effective April 1 of that year.

They were responding to a trash fire, near the Camp Polk prison farm on the later-named (and likely only later-paved) Blue Ridge Road. The apparatus overturned while “they were turning from Highway 1 onto a service road that runs between the [Meredith] college property and the State College animal husbandry frame,” as news accounts reported. 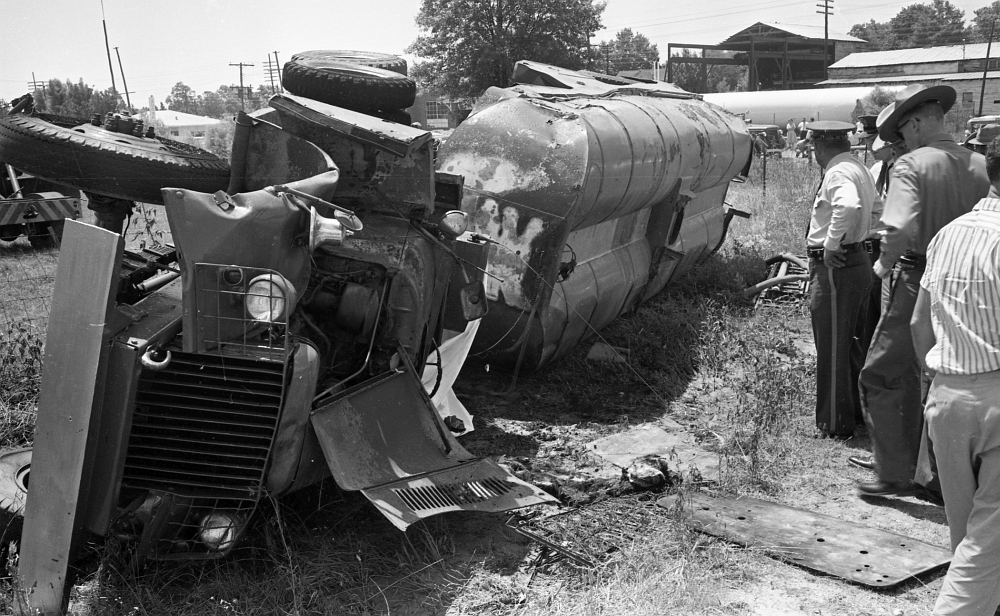 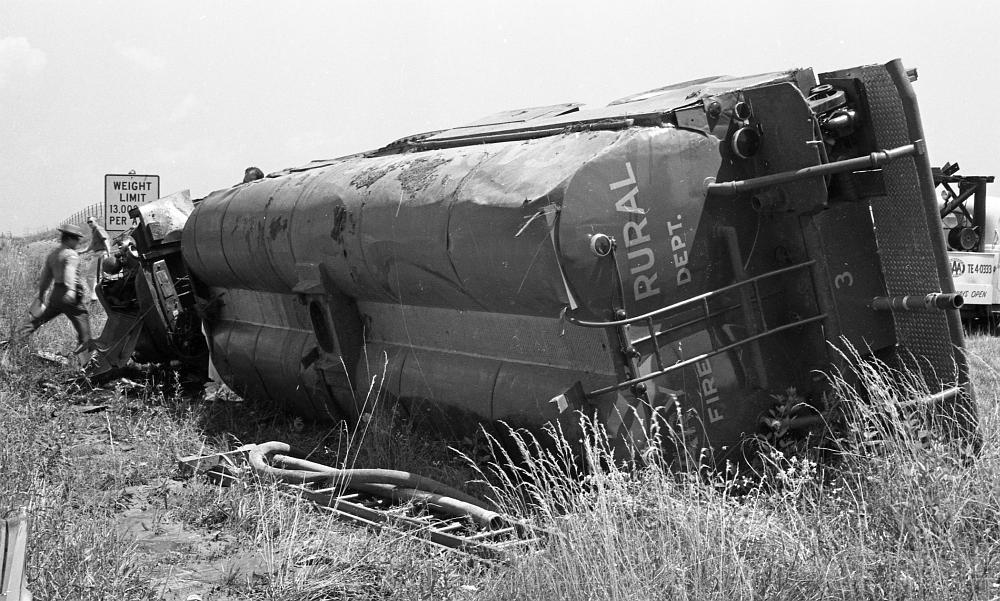 But where exactly did the accident occur?

We recently did some digging on the Facebook side. Here’s what we found, and through the helpful detective work of Olde Raleigh. Looking closely at some of the pictures taken by a News & Observer photographer, there are telltale signs. The smokestack at Meredith College, for example. And, even more tellingly, a building that matches its current incarnation via Google Maps. Solved! 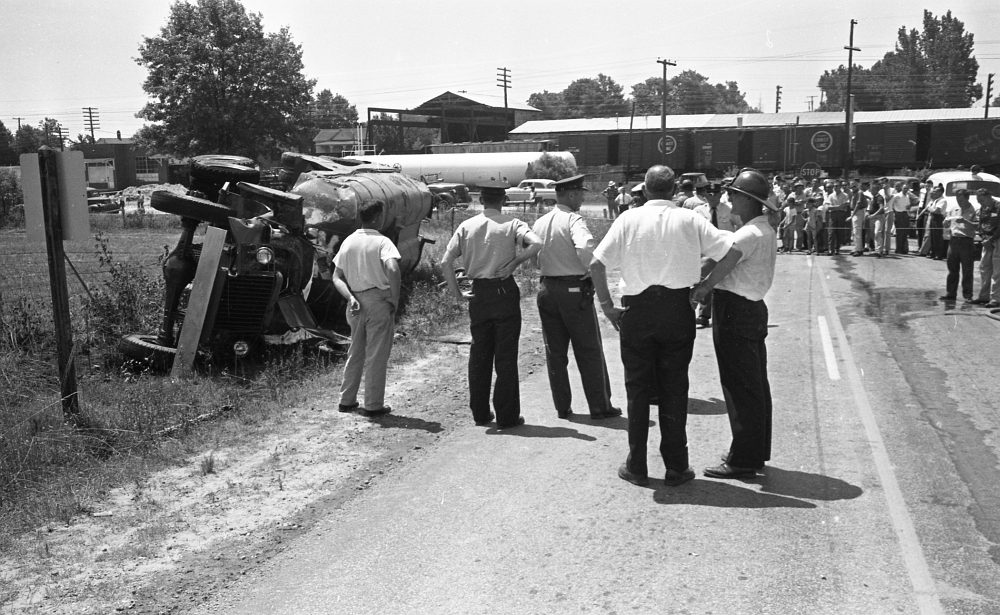 Overlaid on a period map, here’s the site along with the later location of the Beltline. The map is from Mr. Blogger’s Hidden Raleigh page. 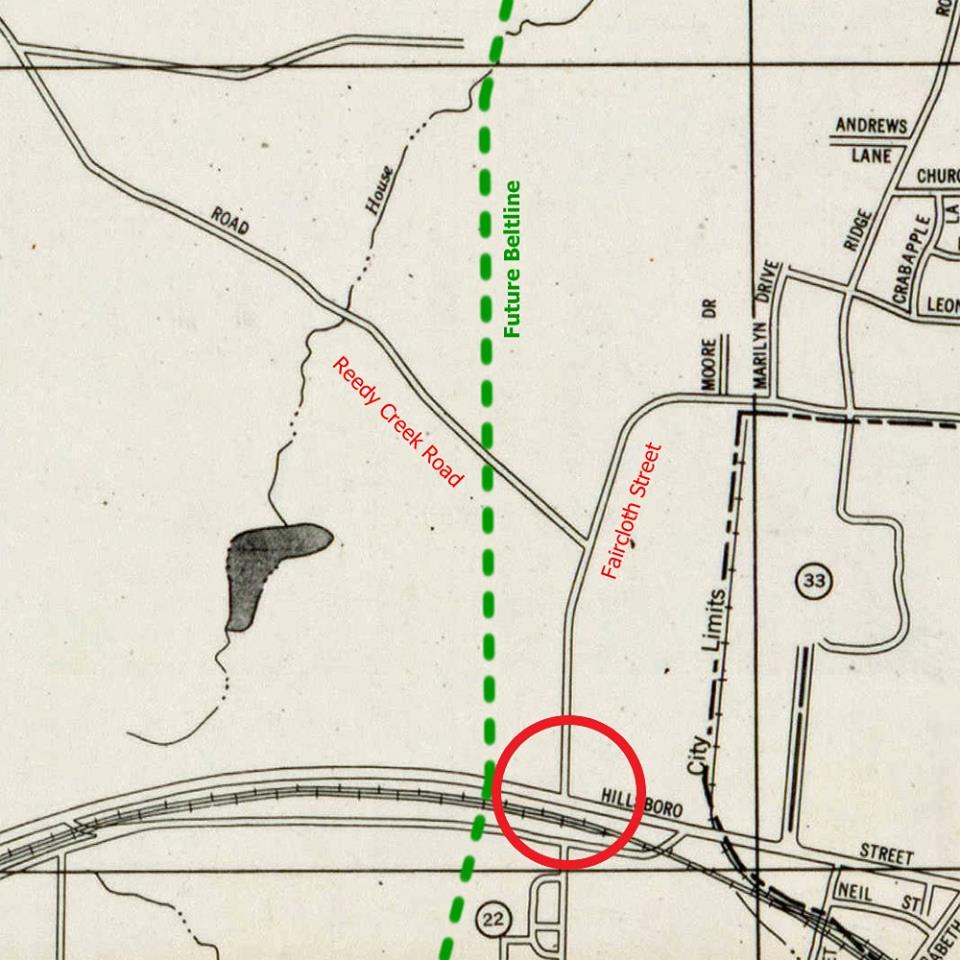 It occurred about 10:00 a.m. Thompson was pinned under the cab, and died after gasoline leaking from the fuel tank under the seat was apparently ignited by an electrical short. Henderson was transported to Rex Hospital for “cuts, bruises, and shock.”

Raleigh firefighters and other rescue workers spent nearly two hours recovering Thompson’s body.[1] The first wrecker sent to the scene was unable to lift the truck, and a second, larger wrecker lifted the cab enough to recover Thompson’s body.

Both Thompson and Henderson were state employees working at the prison farm and were en route to extinguish the rekindling of a trash fire near the prison dump from the night before. Henderson was driving about 15 miles an hour when the accident occurred. Pavement markings stretched about 120 feet, created by the pressure of the heavy, slowing truck. The cab of the tanker was destroyed; the apparatus was not returned to service.

Funeral services were held on June 18 at Cary Baptist Church, with burial at Cary Cemetery the same day. 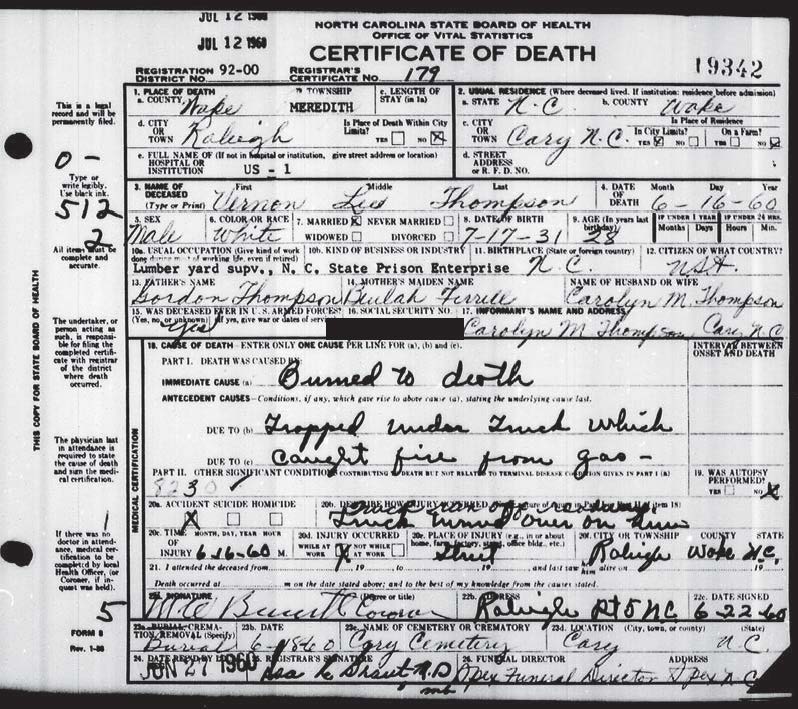 The 4,500-gallon tanker was built by firefighters in 1954, using an ex-military tractor and a converted gasoline tanker trailer. It was also equipped with a 350 GPM portable pump.

“The idea for the tractor-drawn apparatus came from the Wake County Board of Commissioners, which set up funds to purchase tank trailers for rural fire departments that obtain tractors to pull them. Legal problems prevented the funds from being used, but the Cary Fire Department went ahead anyway.

The tractor was purchased at Camp Lejeune as military surplus, a 180-horsepower International truck tractor with 10 forward speeds and two reverse speeds. The 4,000 tank is donated by Bryan-Cooper Oil Company of Raleigh and mounted on a wheeled chassis by firefighters, who also installed new tires, brakes, and lights.

Mounted at the back of the tank was a 350 GPM portable pump that could be used to power water streams or fill the tank. The inside of the tank was given a special coating, so drinking water could be transported.

The tractor had a 1,500-watt AC generator mounted, ten new tires and tubes, and a brilliant red paint job. The engine, brakes, and other parts were overhauled. The bell from Cary’s first fire truck, a Model-T in 1924, was re-plated and placed on the truck.

The entire project was completed by the twenty fire department members without funds from the Town treasury. Instead, they were assisted by a host of individuals donating equipment and other things.” 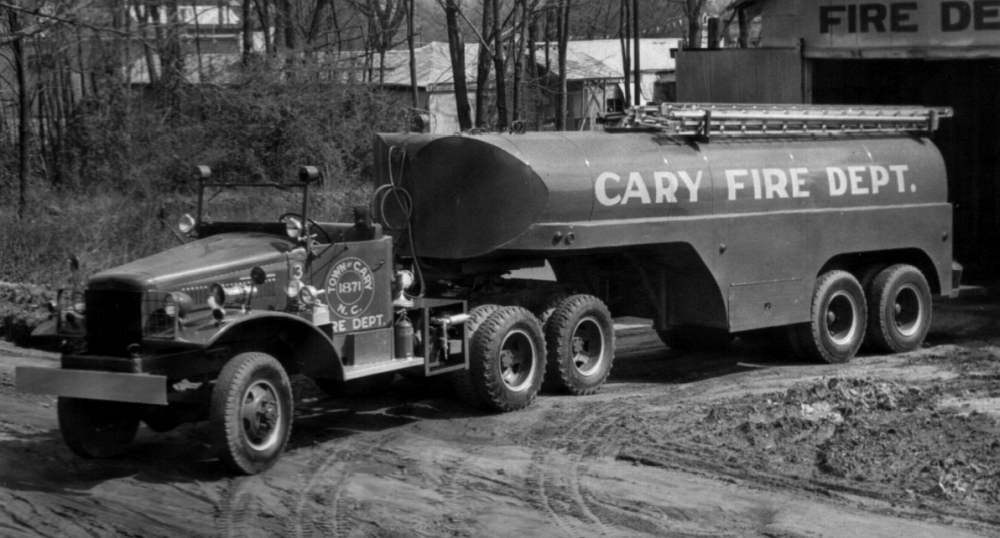