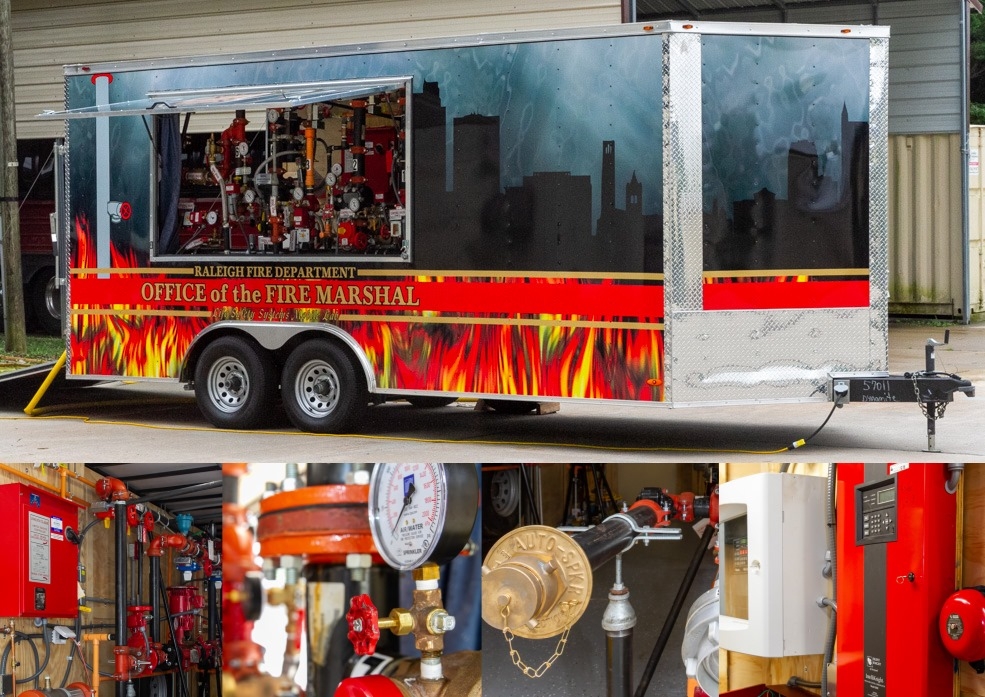 Let’s take a look inside the Raleigh Fire Department’s new Mobile Life Safety Systems Simulator Lab. It was developed by the Office of the Fire Marshal (OFM) as a portable teaching tool for firefighters, fire inspectors, and business owners to learn about the inner workings of fire alarm, fire sprinkler, and standpipe systems.

Providing a wider learning experience than is normally available outside those industries–through in-depth, hands-on learning–the training tool will help reduce the city’s most common code violation in commercial structures: insufficient maintenance of fire protection systems. The simulator helps students learn how the systems operate and to how to perform basic troubleshooting as well as routine maintenance operations.

The simulator is equipped with two types of fire alarm systems, four different types of sprinkler systems, a fire pump, and a typical standpipe system. These are the most common types of fire protection systems found in most commercial structures and larger residential multi-family dwellings across the city, the state, and the nation.

Except for fire pump, these simulated systems are fully functional and students can practice the same scenarios encountered in an emergency, but without the danger and stress of an actual event. They can open and close valves, operate control panels, and observe the systems working together.

Inside the handsomely wrapped trailer are fully-functional fire-alarm control panels, a horn/strobe notification device, and a manual pull station. There are also smoke and heat detectors to mimic what happens when the system detects a fire, either through actuation or system malfunction. Carefully crafted training scenarios are based on situations encountered in the field and allow students to perform actions at the fire alarm control panel to successfully mitigate a system activation.

Dry-pipe systems are used in places where cold temperatures can cause water within the piping to freeze. In these systems, the pipes are filled with pressurized air instead of water until a fire is detected. In addition to an accelerator, the simulator contains a newer style of dry-pipe sprinkler riser with an external reset feature. These features allow students to actually trip the valve, watch water move through the system, then reset the valve.

Although pre-action sprinkler systems are rare–they’re used mostly in computer rooms to reduce the chance of an accidental water discharge–there are dozens of them in use across the city. Thus firefighters must also learn to recognize and operate them. Like the others systems, the pre-action sprinkler in the simulator allows to students to manipulate the controls and study the effects without the danger and costs of controlling a live system.

The simulator was placed in service in January 2020. It is presently housed at Station 12 on Poole Road, with plans to move it to the training center at a later date. It’s towed using one of the pick-up trucks assigned to OFM. The division plans to obtain a dedicated towing vehicle for the simulator and other OFM trailers.

Although based at the Raleigh Fire Department and with its initial mission to better train the city’s firefighters, the simulator is available throughout the region for qualified training events, and has the potential to provide valuable training for individuals from across the state.

The Mobile Life Safety System Simulator Lab was the idea of Asst. Fire Marshal Brandon McGhee, but quickly turned into a combined effort between the Office of the Fire Marshal and Clayton-based J&D Sprinkler Company. The project took about 18 months to develop from start to finish.

McGhee says “We took the idea to J&D sprinkler who turned the idea on paper, into CAD drawings of the simulator lab. Once the design was finalized they reached out to many different vendors that they work with who in turn donated various pieces for the different sprinkler systems. Once they received all the pieces J&D fabricated and assembled the sprinkler portions for us.”

He adds, “While the sprinkler system was being built at J&D, other vendors were also interested in donating materials for the build. We were extremely fortunate in that donations funded most of the trailer, leaving OFM with only the wiring of fire alarms, lights, and other components to complete the project.”

The Raleigh Fire Department Office of the Fire Marshal extends their sincere gratitude to all who contributed to making this project possible and they hope to make all their communities safer through its use.