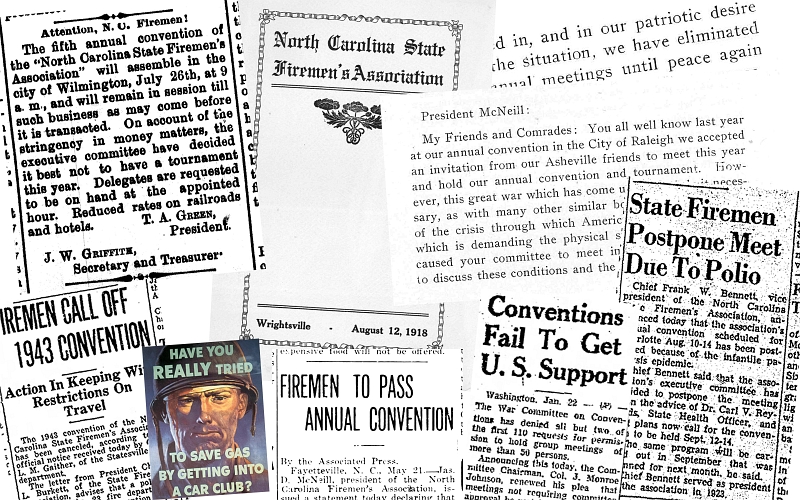 Note: This posting is also available as a PDF document. Download. (2.4M)

On May 6, 2020, during the early months of the coronavirus pandemic,  the North Carolina State Firefighters’ Association (NCSFA) announced the cancellation of their annual conference.

The South Atlantic Fire Rescue Expo was scheduled to take place in Raleigh on August 12-15, 2020. As they noted in their announcement, it was only the fourth time the event has been cancelled in their 133-year history.

The following is a short (short?) history of conference cancellations of the past, along with the 1944 delay due to polio, and some tournament and fire college cancellations.

Convention Delayed… Due to Polio, 1944

On July 24, 1944, NCSFA Vice President Charles Burkett announced that the annual convention in Charlotte, scheduled for August 10-14, would be postponed for one month due to the “infantile paralysis epidemic.” As reported by the Durham Sun on that date, Burkett said that the Executive Committee made the decision based upon the advice of State Health Officer Dr. Carl V. Reynolds. The convention was rescheduled to September 12-14, with the same program as was planned for the August dates.

During the polio outbreaks of the 1940s and 1950s, the North Carolina fire departments and rescue squads assisted with public health efforts by adding iron lungs to their emergency equipment. Below is a picture of the Durham Fire Department receiving an iron lung, as photographed by Charles Cooper for the Durham Morning Herald circa March 30, 1948. 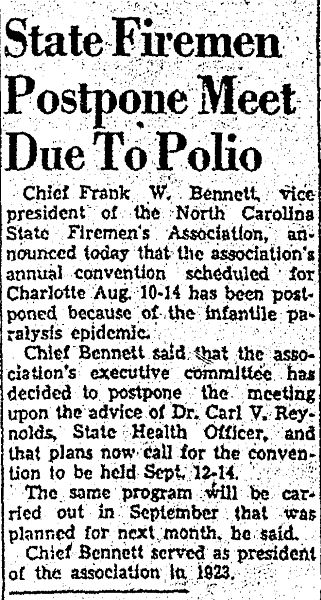 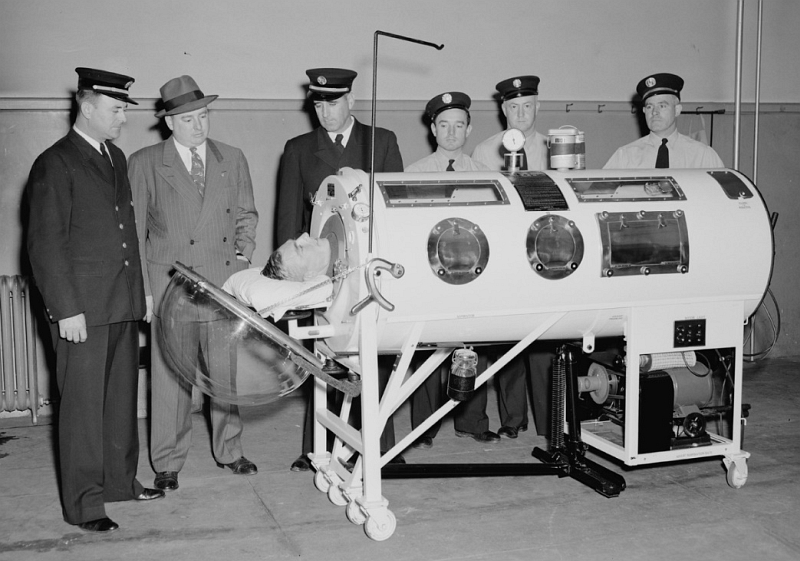 Conventions Cancelled Due to War Conditions

On June 17, 1943, Statesville Fire Department Chief “Red” Gaither told the Statesville Daily Record that the annual firemen’s convention would not be held that year. Among the cited reasons were the wartime restrictions on domestic travel.

The state association had taken a vote, with 92 departments voting against, and 23 voting in favor. Upon receiving all votes, the following notice was sent to member departments by President Charles L. Burkett:

“Upon the return [of votes] as set forth above, the duty of the executive committee was made plain: Therefore, the following resolution was unanimously passed by the committee, cancelling the 1943 convention of the North Carolina State Firemen’s Association.”

“RESOLUTION: That the return of the vote, clearly indicates that a great majority are in favor of canceling the 1943 convention, and upon the authority vested in the executive committee, they do now, and hereby, declare the 1943 convention canceled.”

“Officers of the State Association will promptly, on or, after June 30, prepare their reports as usual. The books and records will be audited as usual, and the report of the officers, together with the report of the audit, will be published in book form and forwarded to you as soon as printed.”

“The association will function during the next year just as it has in the past, with the exception that the annual convention will not be held.”

“A failure to hold any annual meeting at the time designated in the constitution shall in no ways make a dissolution of the association. See constitution, Article 4, Section 2.”

During World War II, travel within the United States was impacted by gasoline rationing. A nationwide program began on December 1, 1942, and ended on August 15, 1945. A national speed limited of 35 mph was also imposed, to save fuel as well as rubber for tires. For a short period in 1943, gas rations were further reduced and all “pleasure driving” was prohibited. 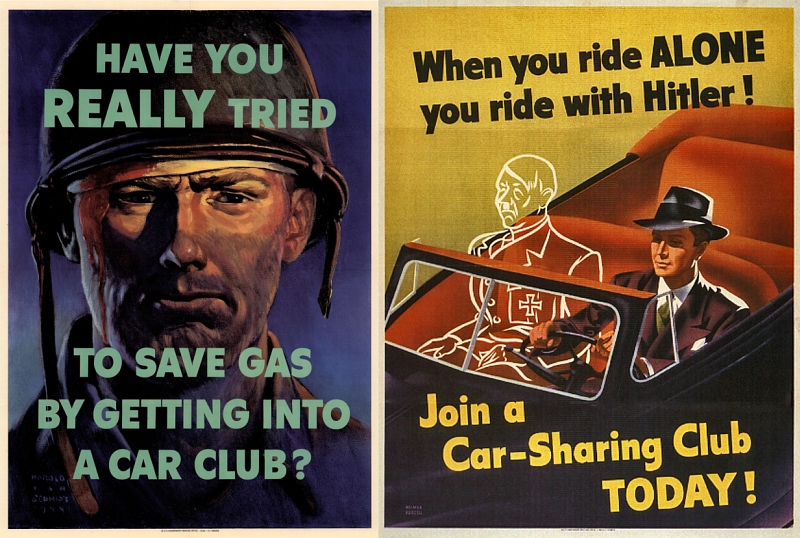 On June 21, 1945, the Executive Committee met in Salisbury and passed a resolution postponing the annual convention, due to the ongoing war conditions.

The NCSFA produced a printed booklet that year, similar to the annual printed proceedings, with the reports of officers, the year’s financials, and other information. In the booklet, the President’s message noted that the gasoline shortage—due to wartime rationing—prevented his visiting to as many fire departments as conducted last year. It also compelled him to decline invitations to meetings with certain groups.

The Statistician’s report noted that through May 1 of that year, more than 600 “associations” had been denied permissions to large meetings, while only fifteen had been approved. The approved groups included labor unions, church organizations, united service organizations, and the Red Cross. He reported that through May 1, 1945, not a single “firematic organization” had received permission from the federal government’s War Committee on Conventions.

The annual convention planned for 1946 was also cancelled, due to the Executive Board unable to “obtain a meeting place.”

On December 19, 1946, NCSFA members[1] held a meeting in Salisbury, for the purpose of electing new officers and discussing some new business, notably passing seven resolutions for improve the state fire prevention laws, to be presented before the State Attorney General.

[1] Based on the news story, the meeting did not consist of the full membership, but just fire chiefs and, presumably, the NCSFA executive board. 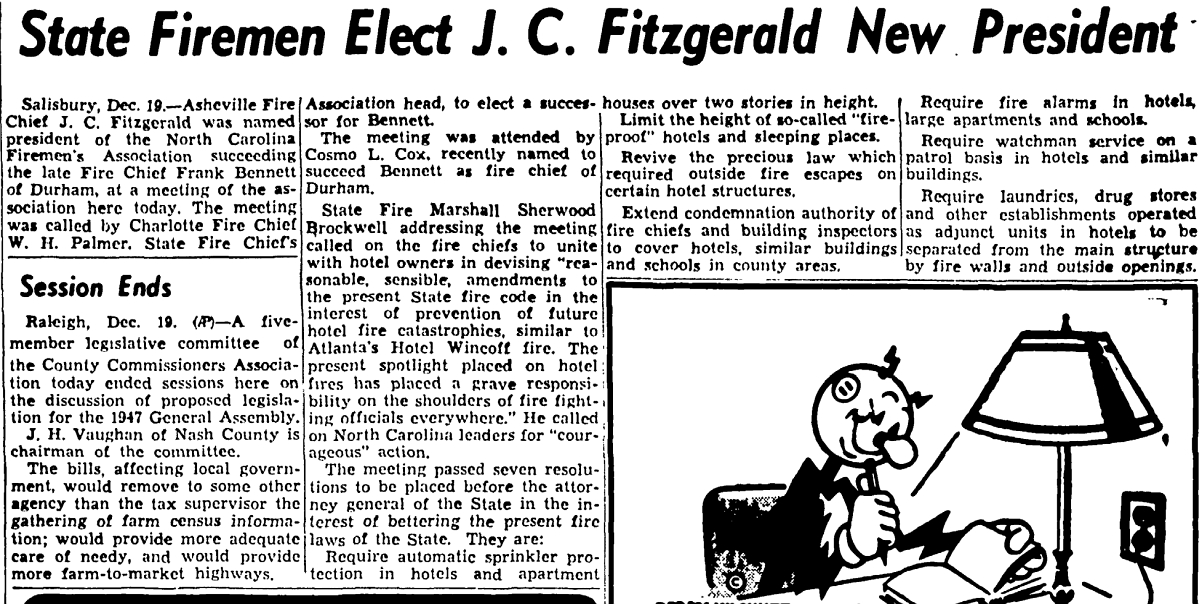 For decades beginning in 1890, the state association of black firefighters also held annual conventions. The two- to four-day event included both business meetings and tournaments.

Formally named the North Carolina Volunteer Fire Fighters Association (NCVFFA), the organization also apparently suspended their annual gatherings during World War II. No newspaper accounts of those events have been found for the years 1943 to 1947.

The last convention during World War II was apparently held in Warrenton in August 1942, and wasn’t followed until Greenville in July 1948.

Over those early decades, the tournaments were interrupted once for funding in 1893, and then for three years during World War I.

The fifth annual convention was held in Wilmington in July 1893, but without a tournament. This announcement printed in the Raleigh News & Observer on July 22, 1893, noted:

The fifth annual convention of the “North Carolina State Firemen’s Association” will assemble in the city of Wilmington, July 26th, at 9 a.m., and will remain in session till such business as may come before it is transacted. On account of the stringency in money matters, the executive committee have decided it best not to have a tournament this year. Delegates are requested to be on hand at the appointed hour. Reduced rates on railroads and hotels. 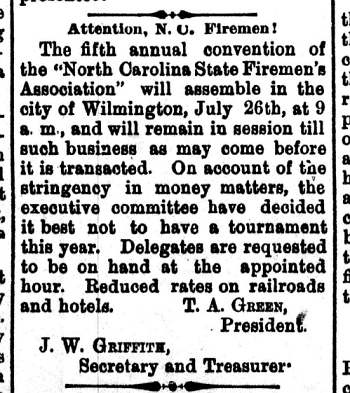 Reported the Wilmington Morning Star on July 23, 1893, “It is a matter of regret to the firemen of Wilmington, as well as many other citizens, that owing to circumstances over which they have no control, suitable arrangements for the annual tournament could not be made.” The Raleigh News & Observer on July 25, 1893, noted “The committee having the matter in hand deemed it quite impossible at present to raise the funds necessary to make the tournament a success. They consequently had to abandon the idea.”

In May 1917, newspapers reported that NCSFA President James McNeill issued a statement on May 21 that the annual meeting and tournament planned to be held in Asheville had been cancelled. And that the executive committee would be meeting soon, to begin planning for next year’s event.

This proved a premature announcement, and the event was still held, but in Morehead City instead of Asheville.

No tournament was held, however, as the county was also sending soldiers overseas to fight in World War I. In response to those “war conditions on the home front,” the executive committee cancelled the contests.

From the printed proceedings:

My Friends and Comrades: You all well know last year at our annual convention in the City of Raleigh we accepted an invitation from our Asheville friends to meet this year and hold our annual convention and tournament. However, this great war which has come upon us made it necessary, as with many other similar bodies, and on account of the crisis through which America is now passing and which is demanding the physical strength of the nation, caused your committee to meet in Asheville this spring to discuss these conditions and the advisability of dispensing with the tournament this year, and it was mutually agreed by them that it was for the best interest of all that this great body of ours should follow in the footsteps of all large bodies throughout this broad land and hold only a convention of delegates for the purpose of transacting our necessary business.

Therefore, we are meeting for the first time in our history simply as a delegate convention, and I look upon this as one of the most important conventions from a business standpoint. Your committee also saw fit to postpone our meeting in Asheville for one year, hoping that by that time the war clouds will have rolled away and that we may be able to meet there in 1918 and have the best tournament we have ever held. The Asheville committee is here to renew that invitation to meet there in 1918. Our committee, therefore, selected Morehead City for our annual convention of 1917, because the Morehead City Fire Department has been one of our leading fire departments, and we felt it was due to them that we hold our convention here.

With war conditions still impacting the country, the NCSFA executive committee again changed their convention plans. Asheville as the location was again postponed, and the conference was held in Wrightsville Beach. The tournament, however, was again cancelled.

From the printed proceedings:

Heretofore, as you all know, meetings of the North Carolina State Fire Association have been accompanied by a tournament where exhibitions of skill were shown to the people, making it a big gathering; but owing to conditions existing on account of this fearful war, which the whole world seems to be engaged in, and in our patriotic desire to do everything to help the situation, we have eliminated the tournament at the annual meetings until peace again prevails throughout the land, at which time we propose, in the City of Asheville, the biggest, best, and greatest peace jubilee in Dixie that has ever been held. Mayor Moore, we want you to be there. We are going to have a dickens of a time.

Twice deferred as the conference location, the city of Asheville hosted the annual state firemen’s meeting in July 1919. There was no tournament, as transportation was unavailable for the participating fire company equipment.

Noted President James McNeill in the printed proceedings “It will be recalled, that the Asheville original invitation was to include a big Peace Jubilee and Tournament, but this was found to be impossible, as the railroads, upon whom we are dependent for transportation and rate privileges are still being operated under war conditions and that we could not make any arrangements with them to even get our usual reduced rates, much less any transportation privileges. The tournament feature, therefore, had to be eliminated, and only the regular convention be held as we have done for the past two years.”

During the conference, Raleigh Fire Chief Charles Farmer motioned that a committee of five be appointed to revise the tournament rules and regulations. After remarks by President McNeill, who noted that the “tournament feature is again a very live issue”, the motion was seconded and carried.

The committee met during the conference and recommended two actions: new rules be written “governing motor trucks” and the rules for “wagon and reel races” be amended. And both of which would be published in the printed proceedings. Their report was adopted.

The following year, the tournament resumed as a feature of the annual convention, which was held in August 1920 in Fayetteville. The tournament featured motor truck contests only, with horse- and hand apparatus contests discontinued. The rules for the motor truck contests were developed and tested by members of the Fayetteville Fire Department, where President James McNeill was Chief of Department.

The NCSFA-sponsored North Carolina Fire College and Drill School was held annually each spring or summer, beginning with the first fire college held in Asheville on April 30 to May 2, 1929e. During its early decades, the fire college location alternated between Asheville, Charlotte, Durham, and Wilmington. It was held exclusively in Charlotte from 1949 to 1964. Beginning in 1965, it again alternated between locations in western, central, and eastern North Carolina.

It appears that only one instance of the fire college was cancelled during the war years, planned in 1945 for Charlotte.