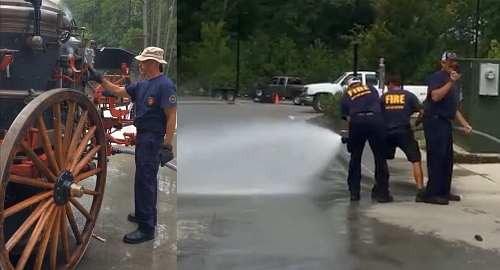 The 1905 American LaFrance Metropolitan steam engine was moved to Station 29, and “A” platoon personnel (shown below) assisted Steamer Committee members with its annual state-mandated boiler inspection. 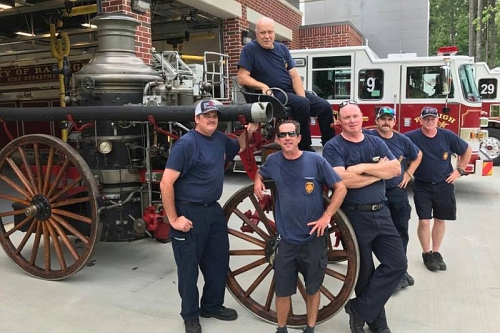 On July 29, a fire was lit, the steam was raised, and the 100+ year-old pumping engine flowed water behind the fire station. Here’s a short video of the test. That’s Captain Mike Ezzell at the controls and ably assisted by Lt. Pat Murphy. They’ve led the restoration and operation of the steamer since the project started in 2011. (See history below.)

Also last month, the steamer received a new old gong. The original had been long-missing, and a replacement was procured last year by the Raleigh Fire Museum. Click to enlarge: 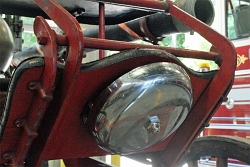 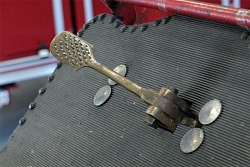 The gong was installed by committee members, and is demonstrated in this video:

Raleigh’s old steamer is housed at Station 28 at 3500 Forestville Road, along with other antique apparatus. There’s also a 1926 American LaFrance triple combination pumper, a 1950 Mack B model pumper, and a 1982 Mack CF pumper. Learn more about these trucks on this fire museum web page.

To request a tour of Station 28, visit the official fire department web site. Look on the right side of the page, and click “Educational Presentation or Station Tour.”

The steamer also makes periodic public appearances, and often at the South Atlantic FIRE RESCUE Expo. The annual conference alternates between Raleigh and Charlotte. It’ll be in Raleigh in 2018 and 2019.

The city’s first steam-powered fire engine was delivered in 1870, a Gould of that model year. It was pulled by hand and operated by the Rescue Steam Fire Engine Company. In 1879, the first horse team was placed in service, and the steamer was subsequent horse-pulled. By the early 1890s, the Gould steamer was serving as a reserve unit. By the early 1900s, it was out of service.

In July 1905, a replacement steamer was delivered. The American LaFrance Metropolitan cost $2,000 and could pump 600 gallons per minute. It was operated by the newly formed L.A. Mahler Steam Fire Engine Company, and used primarily at major fires, and for fires outside of the city.

Horses pulled the steamer until 1915. By that time, the fire department had become both fully-paid and fully-motorized. The steamer was pulled with one of the new American LaFrance combination chemical and hose cars. The steamer remained in service as a reserve unit until at least the early 1930s. Click to enlarge: 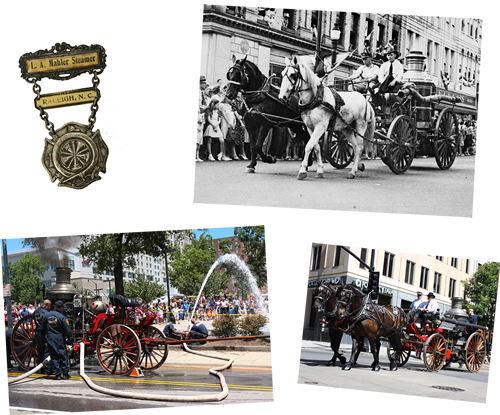 It later served as an auxiliary pump at the State Fairgrounds. In 1947, the steamer was brought back to the Raleigh Fire Department through the intervention of fire buff Bob Biggs.

The teenage Biggs drove the steamer back to the city using a pair of horses from a local college. It remained a parade piece for decades and was last pulled by mules in 1978, before being permanently mounted on a trailer.

On June 16, 2012, the steam engine performed its first public demonstration in decades. It underwent a restoration to operational functionality for the occasion of the Raleigh Fire Department’s centennial anniversary. Two months later, Raleigh’s 1905 steamer—drawn by horse for the occasion—joined Charlotte’s 1902 steamer for a side-by-side demonstration during the South Atlantic Fire Rescue Expo at the convention center.

Hear are a couple more videos, showing the steamer in action in downtown Raleigh: