This is an ongoing blog posting about the rebuilding of Fire Station 6.

The City of Raleigh’s newest fire station was placed in service at 1:30 p.m. on Monday, March 29, 2021. Earlier that morning, Engine 6 relocated from their temporary quarters shared with Engine 5 at Station 5 on Oberlin Road. They were later joined by Ladder 6, relocated from Station 23 on Pinecrest Road.

Located on Fairview Road, the new fire station replaced a 1949 engine house that was located on the same site, and that was demolished in 2017.

Station 6 is located in the Hayes Barton community and first opened in 1943, in a rented building on the opposite side of Oberlin Road. 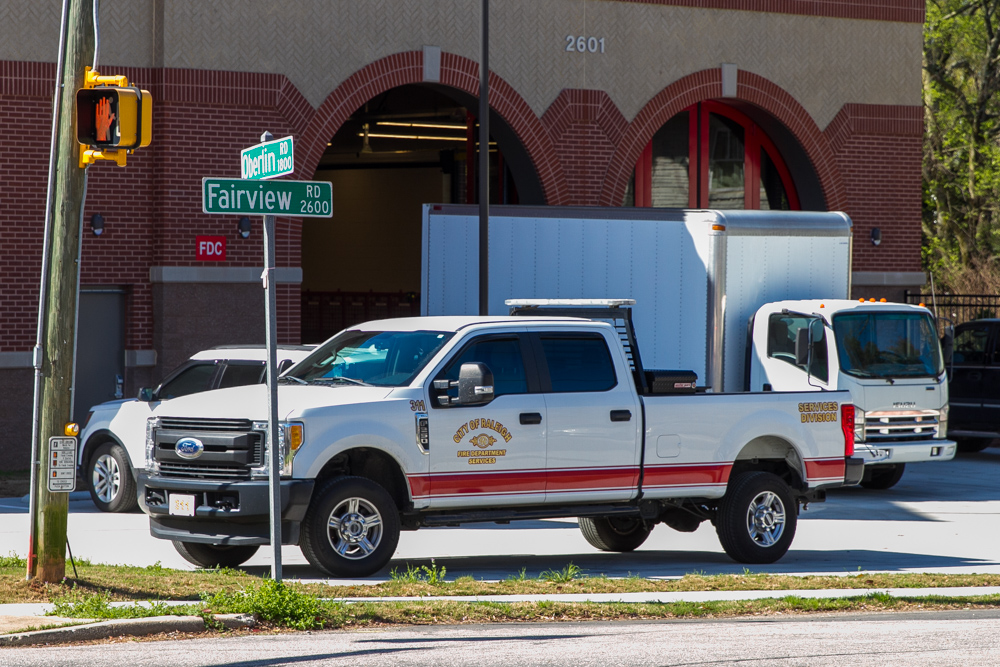 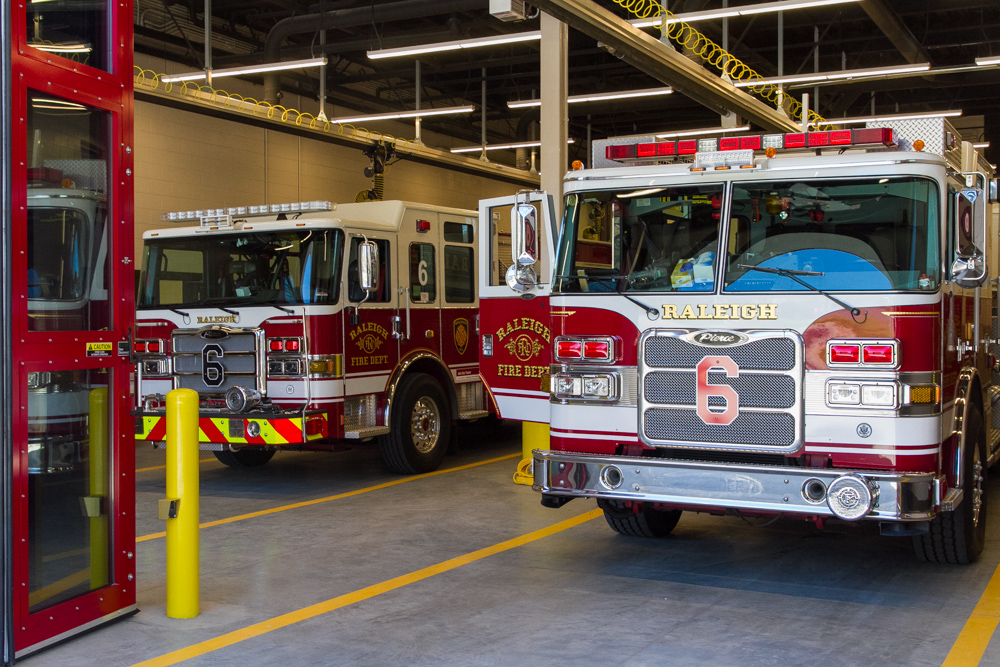 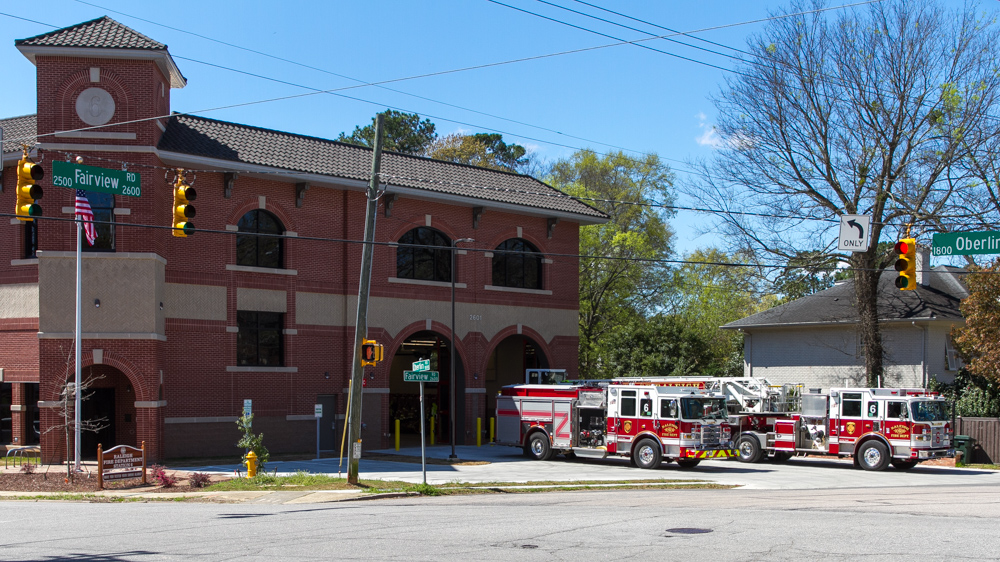 Construction has completed. Some site work is being finished, such as final paving of the parking lot. The building will be occupied within the next couple of weeks. Engine 6 will relocate from its temporary quarters at Station 5, and a ladder company will relocate from Station 23, a tractor-drawn ladder that will be renamed Ladder 6. Below are pictures from November 15. 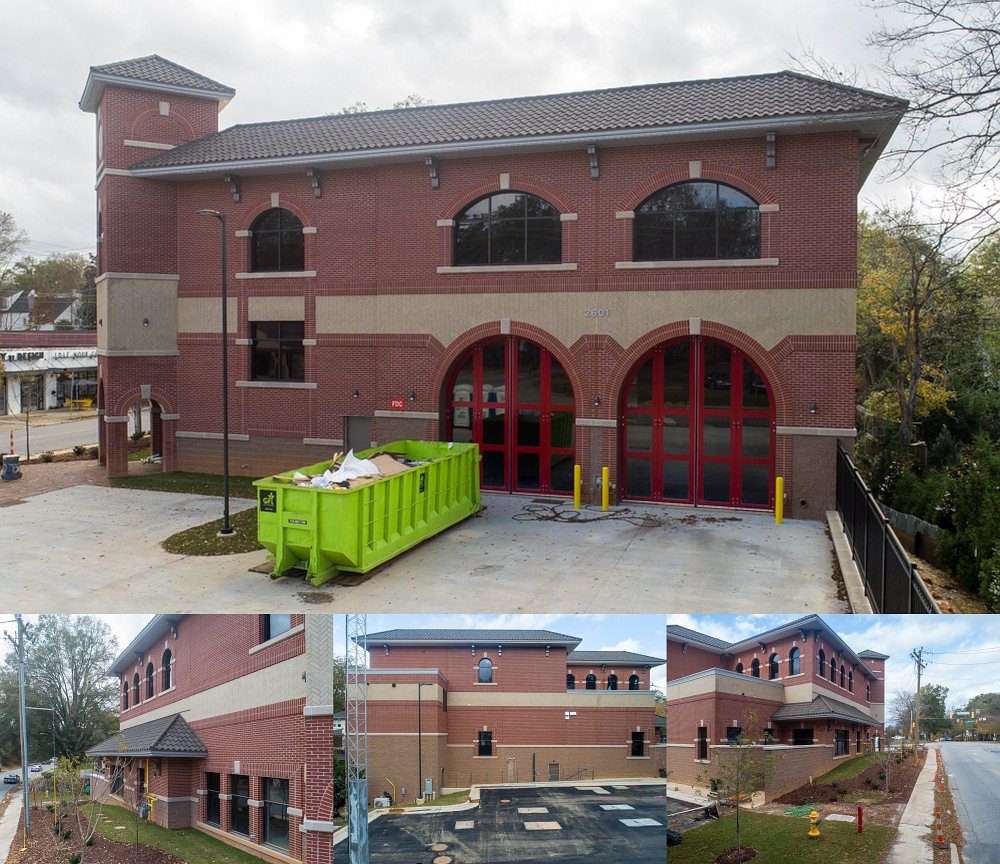 September is the projected project completion date, pushed out from June 2020. 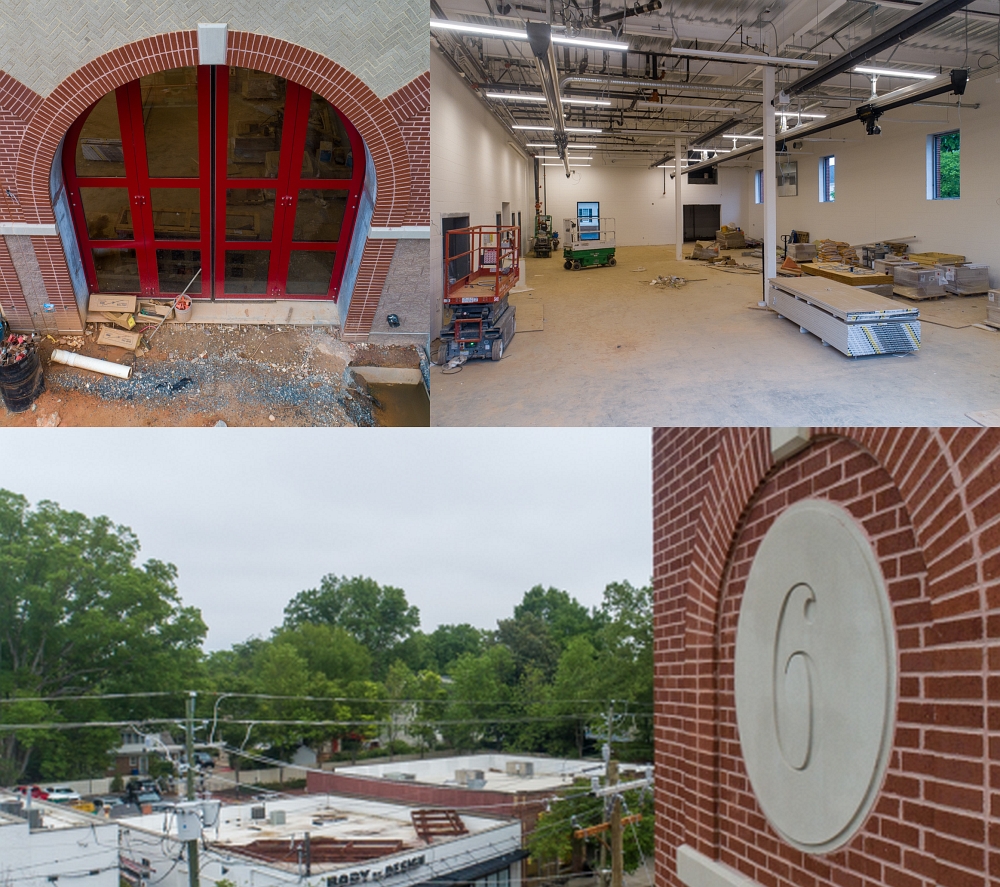 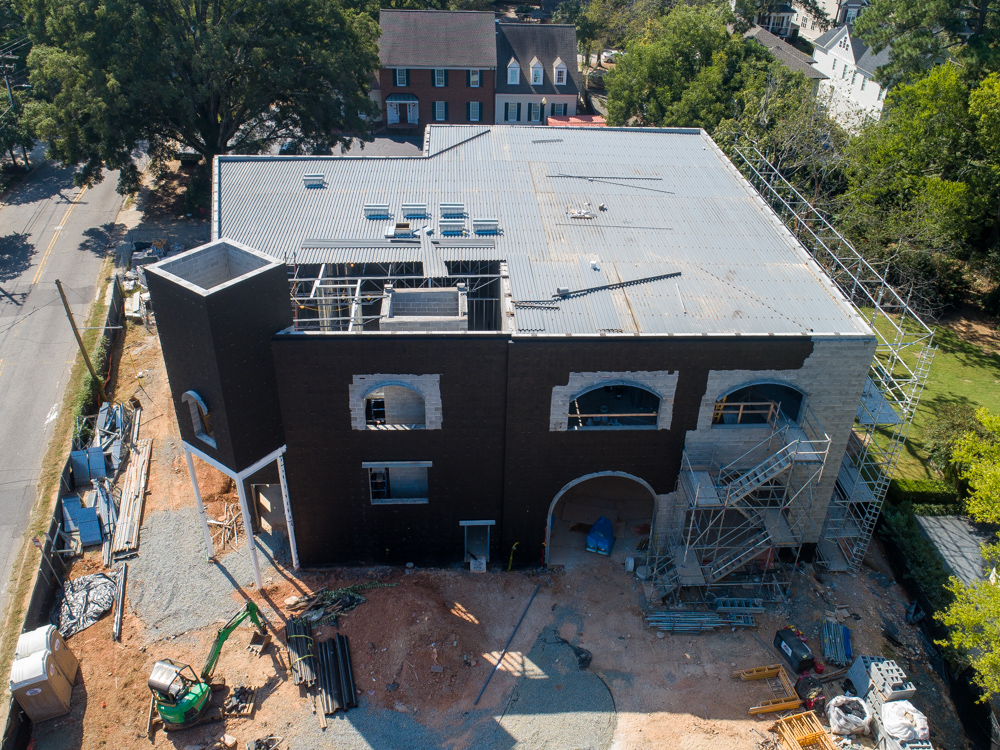 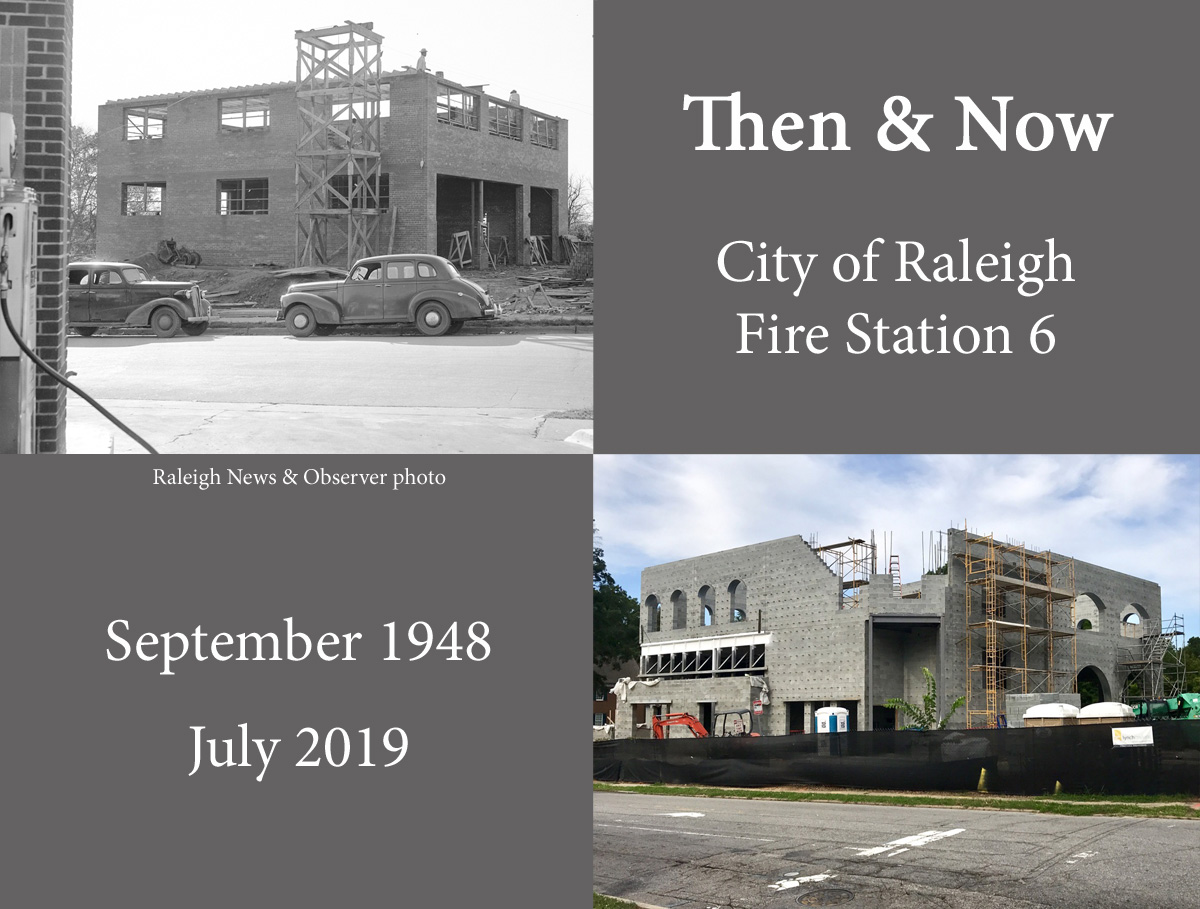 The 1949 engine house was closed in May 2017, and Engine 6 was relocated to Station 5. Project progress has been slower in all phases, alas. During site prep, there was fuel contamination from an underground storage tank, as well as unsuitable soils for compaction and structure.

And as the walls have started going up, the pace is slower due to the very small site size, which adds a limit to on-site materials and activities at any time. 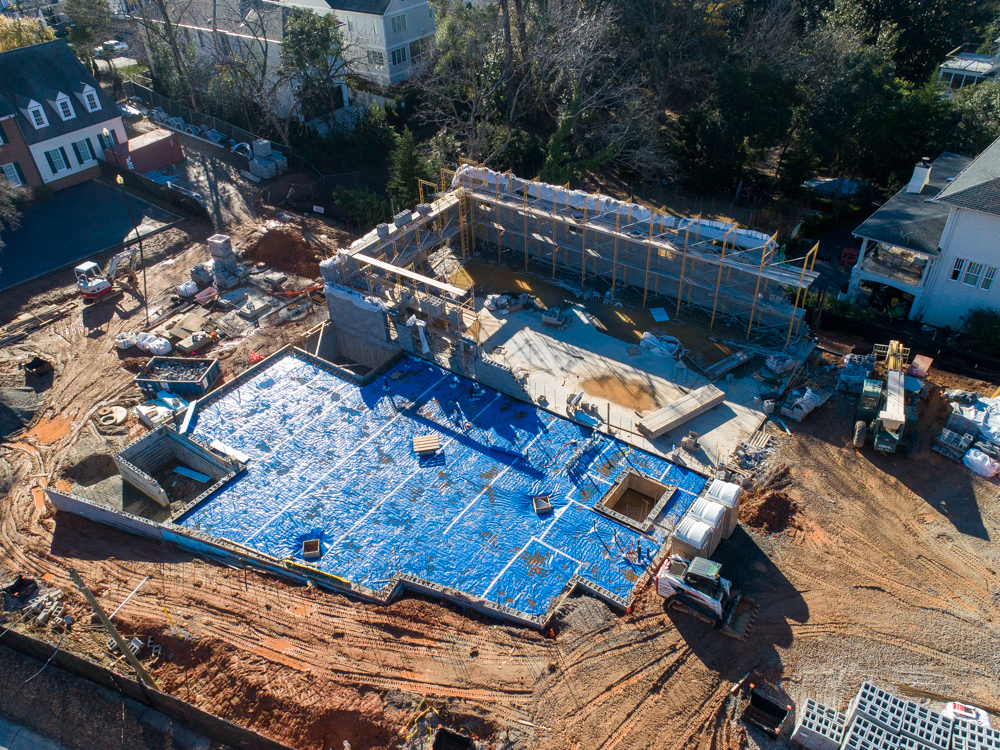 Drawings of each floor, plus the site plan: 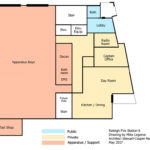 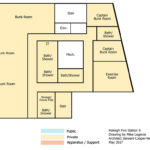 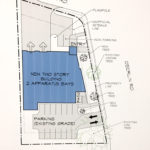 Structural work will begin in July (yea!), with footers and foundation, import fill, and existing retaining wall demolition. Look for the first layer of parking lot asphalt laid soon. That will serve as a material lay down area.

Site work is nearly finished, with water and sewer connections completed in the right of way (Oberlin Road). This was done some weeks ago, and required closing of the road for a number of days. Click to enlarge: 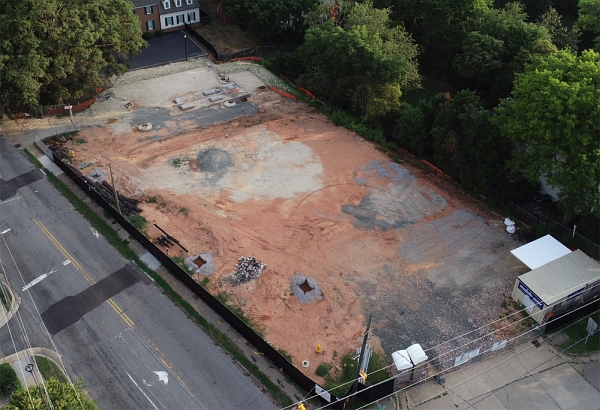 Alas, a couple of project delays have presented, since the demolition was completed in early August 2017.

As part of site preparation, two underground fuel tanks were removed. Soil contamination was discovered and halted the project for several weeks, while the contaminated soil was removed and further testing conducted.

In November, a precast concrete sand filter assembly was installed, under where the parking lot will be located. It will help with storm water run-off. Scroll down to see a picture, or check out Mike’s photo album.

Additional site delays were subsequently encountered as a change of work was negotiated to address unsuitable solids (soil compaction issues), as well as negotiating a right of entry with the residential neighbor. That’s for performing work on or in close proximity to the property line.

Station 6 is now targeted for completion in the fall of 2019. The 1949 engine house was shuttered at 10:29 a.m. on Monday, May 29, 2017. Engine 6 relocated to nearby Station 5 and continues to share their quarters. After they return to their new quarters, they’ll share their digs with the planned Ladder 10.

Site work is underway. Recent work included a sand filter installed in November, under where the parking lot will be located. Will help with storm water run-off. Work was delayed for a number of weeks, after the excavation of two underground fuel tanks, and the resulting soil testing. See more photos on Mike’s new SmugMug site. 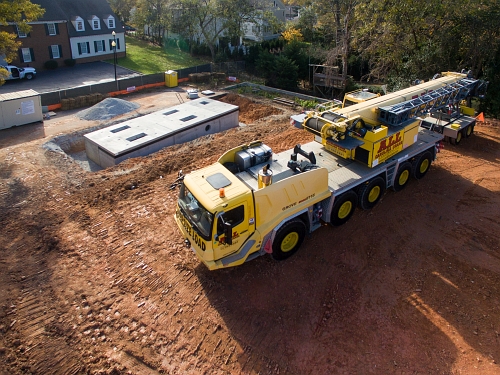 The building has been removed. Remaining materials to be removed, along with the foundation and other ground features. Next is site preparation. See photos and watch videos. 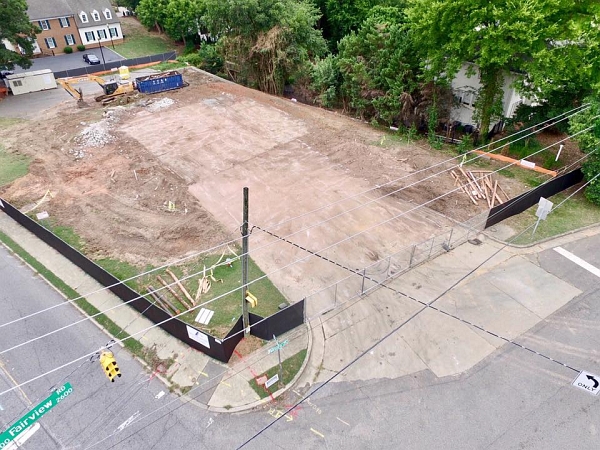 Heavy equipment arrived on the site today, and crews began removing some of the trees from the property. Fencing will be added in another day or so. We’re told the walls will be down, within a day or two after that. See photos and watch videos. 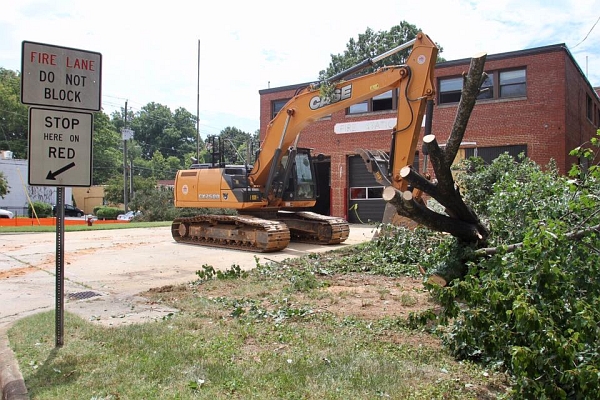 Permits have been completed, and abatement and then salvage starts this week. Demolition should start by the end of the month.

Fire Station 6 on Oberlin Road has closed. Engine 6 on “B” platoon shuttered the fire station at 10:29 a.m. on Monday, May 29. They have relocated to nearby Fire Station 5 in Cameron Village, where they’ll share quarters with Engine 5 during the fourteen-month project. Demolition starts in July. See photos from moving day, from inside the fire station, design drawings, and some historical photos. 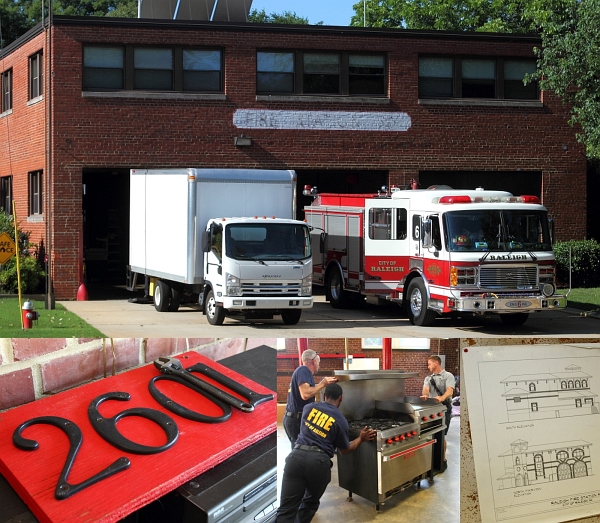 Moving Day is Nigh!

Engine 6 relocates to Station 5 on Monday, May 29. The oldest active engine house in the city will be closed, and a new fire station will be erected on the site. Watch this space for updates, as construction gets underway. 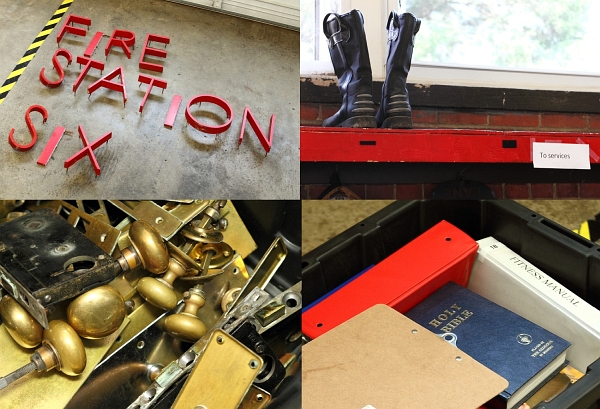 Last month, the construction bid was awarded for the Station 6 project. See below. Construction is planned to begin in May, and Engine 6 will be relocated to Station 5 while the new engine house is being built.

From the City Council meeting minutes of March 7, 2017, published this week:

On March 7, 2017, six formal bids were opened for the Fire Station Number Six New Construction project. KMD Construction submitted the low bid of $5,002,803. After reviewing its bid, KMD Construction requested the bid be withdrawn due to a significant arithmetic error. The next lowest responsible bid was submitted by Pro Construction, Inc. with a bid of $5,057,200. Minority and Women Owned Business Enterprise (MWBE) participation is 16.6 percent. Funding is appropriated in the capital budget.

Recommendation: Award the contract to Pro Construction, Inc. in an amount not to exceed $5,057,200 and authorize the City Manager to execute the contract. Upheld on Consent Agenda. Branch/Thompson – 7 ayes (McFarlane absent and excused).

For the last several weeks, Rescue 1 has been housed at Station 6, while sprinklers were being installed at Station 15. The engine was not relocated, however. They should be moving back any day now.

On April 11, 2016, Engine 5 relocated to Station 6, as temporary quarters while renovations of Station 5 started. They returned to their updated engine house on November 10.

March 11, 2016
And here’s a comparison of the current and future stations. Took these photos at lunch. Tried to match the perspective as closely as possible. Click to enlarge: 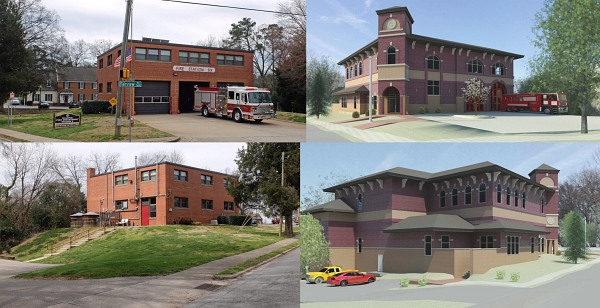 March 10, 2016
These 3D renderings were displayed at Tuesday’s meeting. The site plan and floor plan are completed, but the design of the exterior elements is still being finalized. It may change a bit in the finished product. The bird s eye view displays the south and east building elevations. And the neighboring buildings are shown as simple shapes, to present spatial relationships. Click to enlarge:

March 4, 2016
Press release. A community design meeting for the City of Raleigh s Fire Station 6 rebuild project is scheduled for Tuesday, March 8, at 7:00 p.m., in the apparatus bay at the station, which is located at 2601 Fairview Road. See original announcement, with contact information.

Architects Stewart-Cooper-Newell will present a final site plan, building elevations, and computer model 3D perspectives that show the project s relationship with adjacent buildings. The City is seeking public feedback at the design meeting. Construction is expected to begin in 2017.

Two prior public meetings have been held. Below is a blog posting with a detailed summary of information presented the October meeting. Short summary of everything:

Here’s a preview of the computer modeling. How cool is that?

On Wednesday, October 7, the Raleigh Fire Department held a public meeting at Fire Station 6, to present plans for rebuilding the building. Fire Chief John McGrath opened the presentation with an overview of the project, followed by Architect Ken Newell, from Stewart-Cooper-Newell, who spoke about design considerations.

Questions were posed by the attendees, and answers were provided by city staff and other members of firm. Plus one correction on a historical note from Yours Truly. (See footnote below.) The meeting started about 7:15 p.m. and ended about 8:30 p.m. Less than a dozen citizens attended. 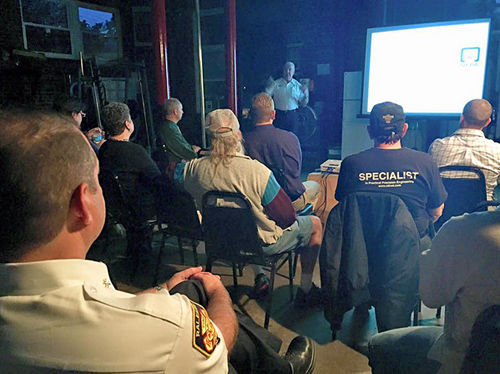 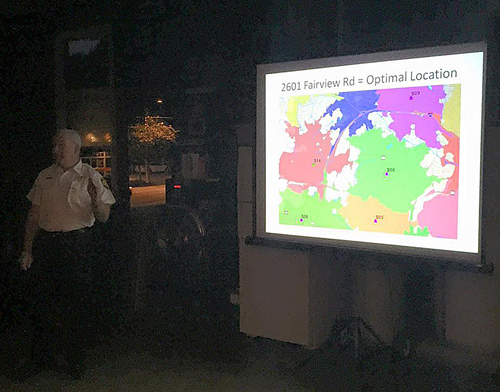 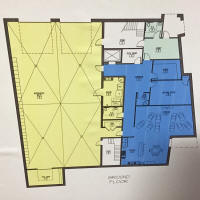 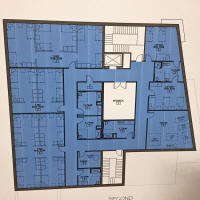 Here s what was talked about…

Design process began with a list of requirements, including:

In his book Raleigh and Wake County Firefighting, published in 2003 by Arcadia Publishing, author and burgeoning historian Mike Legeros wrote about the original Station 6, which opened in a rented building on Fairview Road in 1943. He presented a pair of significant errors: wrong street address and wrong building pictures.

The original Station 6 was a single-story structure at 2519 Fairview Road. It was NOT located at 2513 Fairview Road and was NOT housed in a two-story structure. The latter resides beside the former. Both buildings are still standing. In fact, the numbskull author even had a newspaper photo of the original Station 6. The clipping clearly showed a single-story building. But his imagination took over and he saw the structure next door (the two-story restaurant) as a seemingly obvious former fire station. Wrong!