June 22, 2017
Renovations are well underway. The interior has been gutted. New walls, windows, wiring, plumbing, HVAC, and fixtures are being installed. The adjoining “shop space,” the old repair shop, is being re-purposed as a drive-through apparatus bay and additional living space.

Work should be completed in November.

Engine 2 relocated to their temporary quarters on November 30, and marked in service just after midnight on December 1, 2017. They’re housed at the old city sign, signals, and radio shop, at the corner of Blount and Wilmington Streets. 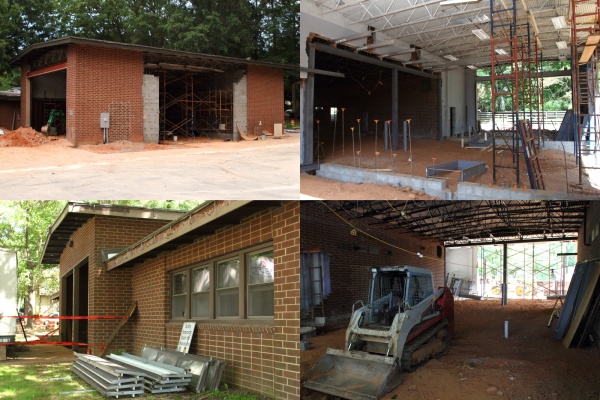 November 26
Work is nearly complete on temporary quarters for Engine 2. They’ll relocate to the old city radio/signals/signs shop at the corner of Wilmington and City Farm. They’ll occupy a mobile home that’s been installed on the site. The engine will be housed in the shop’s single bay, and the haz-mat apparatus and equipment will be stored in the adjoining storage building. See more photos or click to enlarge:

July 14
Construction bids are being received this week for renovations of Raleigh Fire Station 2 at 263 Pecan Road. The project is the second in a multi-year plan for “down to the walls” renovations of older fire stations not slated for replacement or relocation. Renovations to Station 5 at 300 Oberlin Road–first on the list–are currently underway, with Engine 5 temporarily housed at Station 6. (See blog post#1 and blog post #2.) 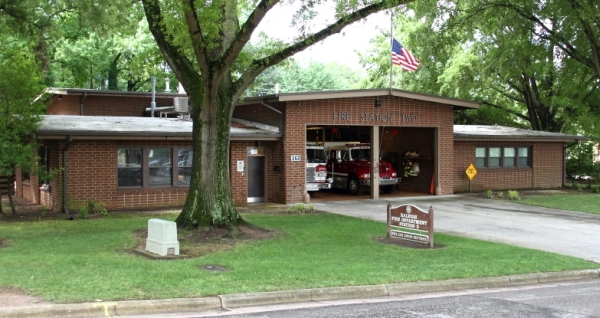 Though similar in design to many of the city’s older engine houses, Station 2 is an atypical facility as it adjoins the former maintenance shop. The latter was relocated to 4120 New Bern Avenue in 2004, to a new Services Support Center built beside the city’s heavy equipment depot. The old shop space was re-purposed into an extension of the fire station, and presently houses Haz-Mat 2, the foam trailer, haz-mat supplies, and exercise equipment. 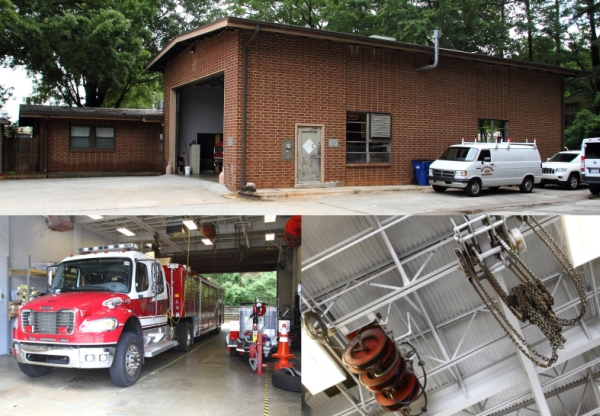 Renovations are planned to start in September. The engine company will be relocated to the old city radio shop, at the corner of Wilmington and City Farm. The building has a single-bay that can house the engine, and the haz-mat apparatus will be stored next door, at the old city bus depot. (Meaning, Haz-Mat 1, the spill support unit and former rescue truck Haz-Mat 4, and the aforementioned foam trailer.)

As designed by Davis Kane Architects, the renovated station will combine the separate spaces. The apparatus bay will be extended and become drive-through. Rooms will be added on either side of the bay, in the rear, including an exercise room and dormitory space. Here’s an annotated copy of the floor plan. Click to enlarge: 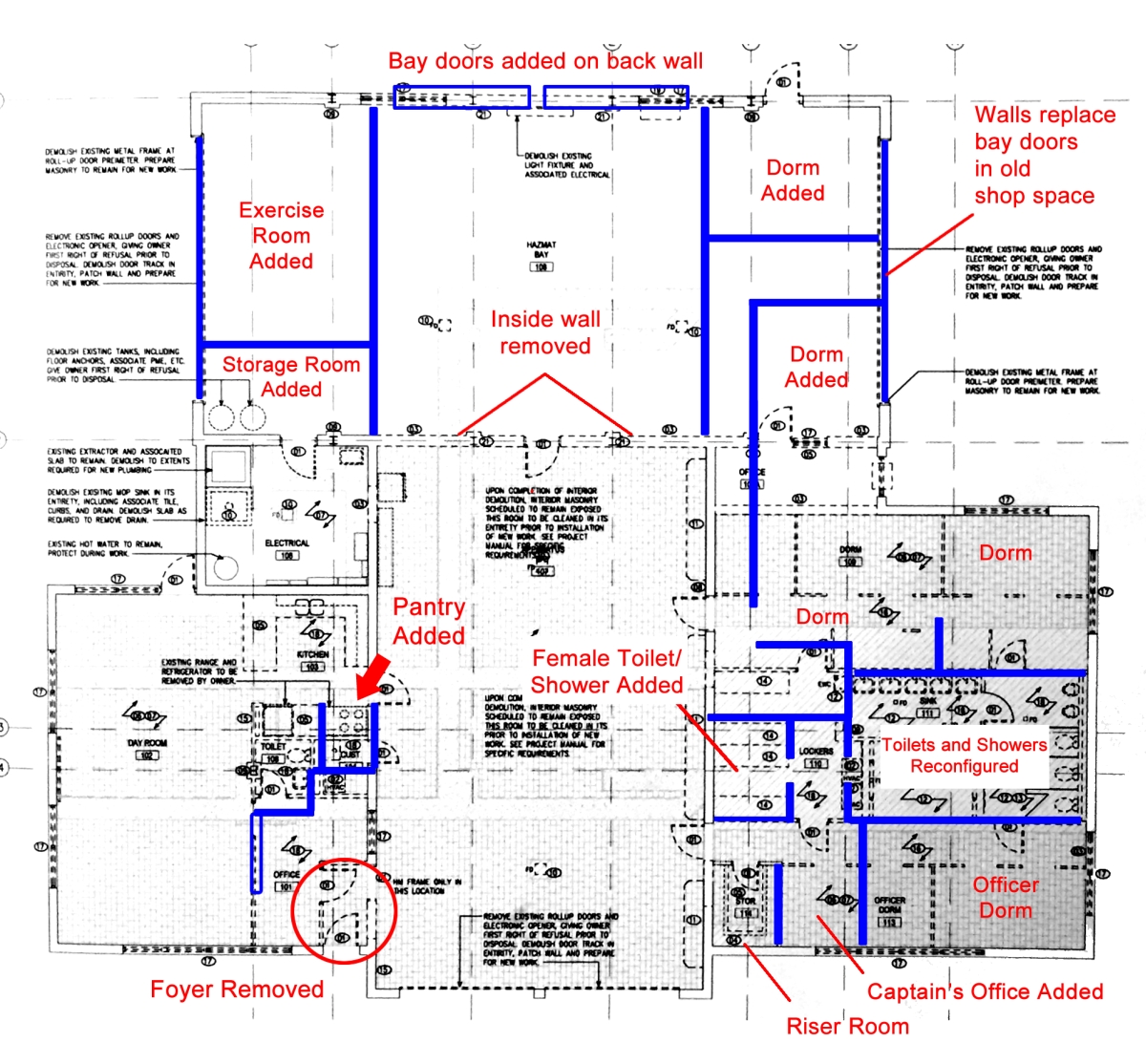 Station 2 opened on Pecan Street on October 16, 1969. It’s the fourth location for Engine 2. The original Station 2 was housed in the old Rescue Company quarters on Fayetteville Street. Built in 1870, it opened as a career fire station on December 1912, with Hose Company 2. The two-story building was replaced in 1914. That year, a new Station 2 was opened at 412 South Salisbury Street. The old building was demolished, after the county reclaimed the site for a new courthouse.

The fire station was relocated again in 1932, into the basement of the newly completed Memorial Auditorium. The two-bay fire station included space for a maintenance shop. (And the rear exterior of the building was designed for use as a training tower, and served as the department’s drill pad.) Engine 2 operated at that location until 1941, when Station 1 moved into old Station 2 on Salisbury Street. 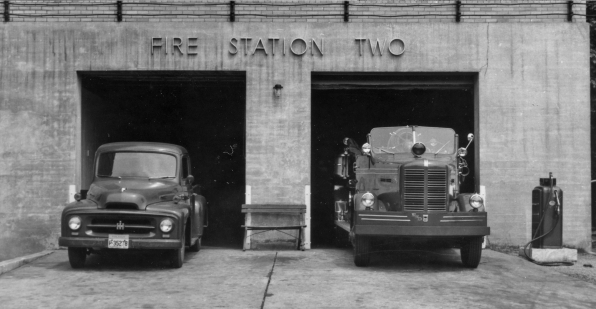 Since neither the aerial ladder nor service ladder truck companies could fit into the Salisbury Street fire station, they were both moved to the fire station at Memorial. Engine 2 was moved back to Salisbury Street, and Station 1 was a “double house” for most of the decade. (It’s also my supposition that two engines at “Central Fire Station” proved useful enough that it was replicated when the new Station 1 opened on Dawson Street in 1953 and Engine 9 was activated.)