Tale of a tragedy from western North Carolina. Early in the morning of Tuesday, July 14, 1942, a pair of explosion at a bulk fuel storage facility in Waynesville killed six people, and also fatally injured Fire Chief Lawrence Kerley. The local newspaper, the weekly Waynesville Mountaineer, provided ample coverage of the disaster, including these two pictures. Read the July 16 issue at http://newspapers.digitalnc.org/lccn/sn92074106/1942-07-16/ed-1. 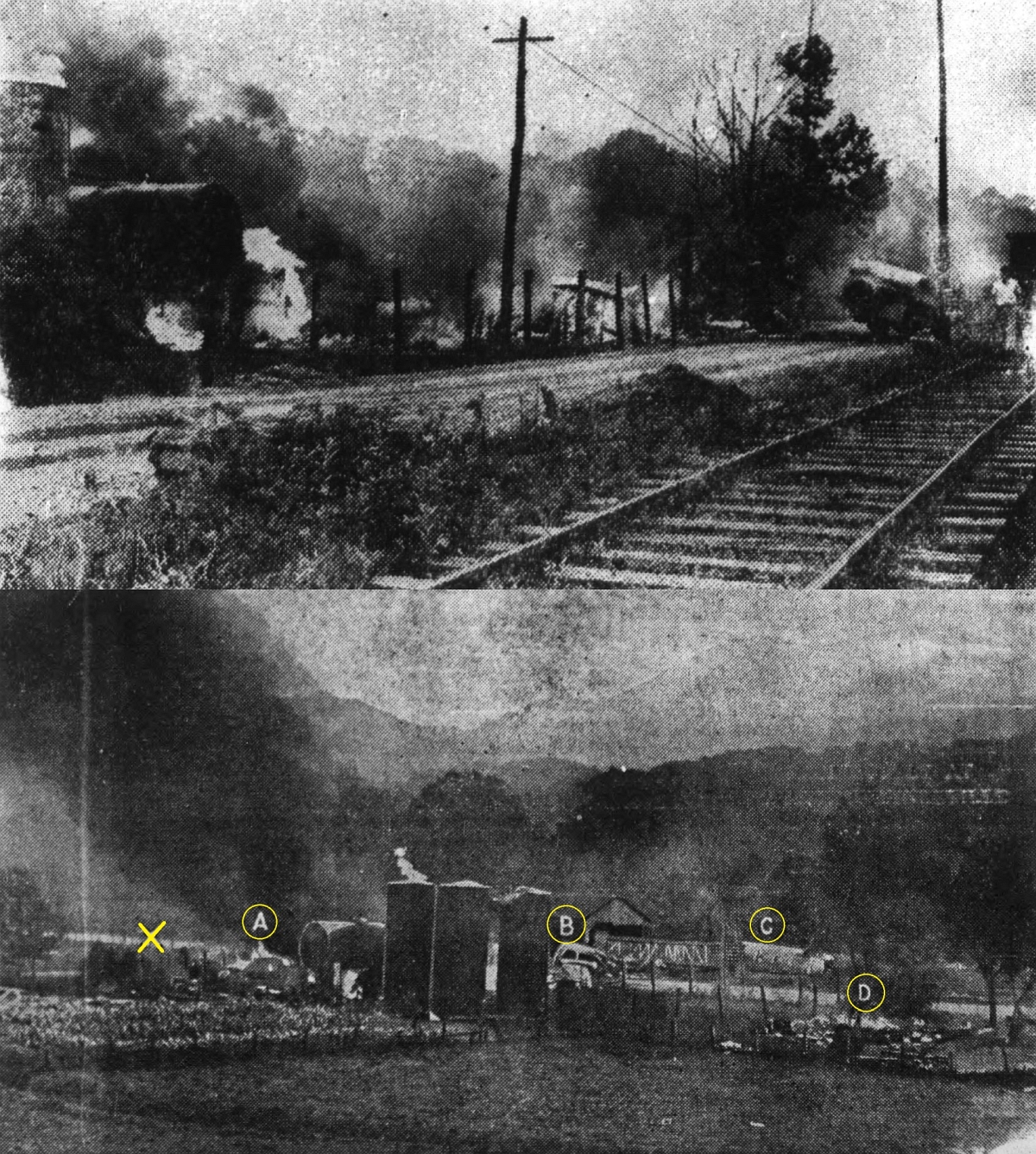 Annotations of the “after” photo, from the next day: (a) oil still burning from the warehouse building, (b) the remains of the tanker truck that was unloading, (c) the horizontal storage tank that was thrown across the highway and over the train tracks, (d) ruins of the Caldwell home, where four people died, and (x) ruins of the Paul Walker home, that was “blown down” and burned.

Some time around 3:00 a.m. an employee at the Standard Oil Company “bulk plant” on Water street discovered gasoline leaking from one of three horizontal storage tanks. He called the Fire Chief, who responded in a town car.

Chief Kerley was apparently near the plant office when fumes from the leak ignited, at 3:20 a.m., and caused the tank to exploded. The chief ran about 400 yards to a nearby home, his clothing in flames. The resident at the house rushed him to Haywood County Hospital. (He would die from his injuries a month later.)

The storage tank, with one end sheared off and landing 50 feet away, was thrown against a parked gasoline tanker truck, and then landed 250 feet away, on the other side of the highway, and over a row of rail cars and their tracks. (While knocking over one of said coal cars.)

The blast also set aflame the nearby residence of the Caldwell family, where the wife and two children were reportedly killed instantly. The husband escaped his burning house and was found 100 yards away by a policeman. The husband died at the hospital at 7:30 a.m. that morning.

Also critically injured was the oil company employee, who died the following day, and a truck driver, who died four days later.

There were two 4,000-gallon gasoline tanker trucks parked at the plant. After the fire department arrived, the firemen moved one of the trucks to safety. But about thirty minutes after the first explosion, the second tanker exploded. (It was carrying 4,000 gallons of gasoline.)

The imminent explosion was described as sounding like “the burning fuse of a giant fire cracker, or escaping steam from a locomotive.” After the resulting blast, “the mass of gasoline shot hundreds of feat into the air.”

A crowd had gathered after the first explosion, and the second blast sent “hundreds scurrying for shelter.” Several people were also injured, receiving cuts and bruises “when [the] throngs started running.” Also noted news accounts were the sixty people observing the “unobstructed view of the holocaust” did not realized they were standing ankle-deep in poison ivy.

Some twenty-five Waynesville firemen–along with local “air raid wardens”–battled the blaze, with hose lines supplied from four hydrants on all sides of the burning tanks. They also played a hose on the exposures: three houses, the Pure Oil Company plant, and the West Coal Yard. (None of the firemen were injured in the second explosion, either.)

When the first explosion happened, the fire department sounded the alarm for the air raid wardens, “as it was not known at that time what the trouble was.” (Recall this was after the attack on Pearl Harbor, and Civilian Defense initiatives were in place.)

Canton sent a pumper to the scene, and a carload of Asheville firemen arrived to assist, along with Asheville Chief Fitzgerald.

One of the wooden train cars was still burning at 10:00 a.m. that morning, when a train crew moved it away. The last of the flames at the plant died out the following afternoon, fifteen hours after the first explosion.

Chief Kerley was hospitalized at Haywood County Hospital, and remained there a month. Though initial updates were positive, during the first couple of weeks his condition apparently worsened. He died of his injuries on Friday afternoon, August 21. He was buried two days later at Greenhill Cemetery, with last rites held at the First Baptist Church.

“Under a blanket of pink gladioli” his body was carried from his home to the church and then the cemetery by the fire truck that the chief “had driven so many times during the years he served the fire department.”

Among the honorary pallbearers were firemen from Asheville, Canton, Hickory, and Sylva.