Found a piece of hidden history this week, about the original Station 3 at 135 East Hargett Street. That was the old Victor Company quarters, erected in 1898 for the all-black volunteer fire company. After the career department was activated in December 1912, the volunteer companies were disbanded. The old station reopened in February 1913, with a hose-drawn hose company, and was motorized the following year.

But get this, Station 3 was closed just a couple years later. Reported the News & Observer on November 11, 1917, the engine house had been “discontinued” and “Company No. 3” moved to the Morgan Street station. That was Headquarters, and Hose Company 3 joined Hose Company 1 and the Aerial Ladder Truck Company. This left just two stations, on West Morgan Street (Station 1) and South Salisbury Street (Station 2).

Why the closure? The city would be saving $500 a year, while maintaining three “truck companies” (motor hose companies) in the fire district, as required by the fire insurance underwriters. And response times would improve, as Hose 3 no longer needed to cross “main streets in the center of the business district.”

To accommodate the relocated fire company, the story reported at Station 1 was being “repaired and enlarged.” And that the “large sleeping hall is being cut up into rooms, each to be used by two firemen.” The change would also give the crews “more privacy in their sleeping quarters.” The run cards were also changed. Only two hose companies would be dispatched on all alarms, Hose 1 and Hose 3 north of Hillsboro Street and New Bern Avenue, and Hose 1 and Hose 2 to the southern and eastern areas of the city.

Added the news story, the old Victor Company firehouse would be sold. 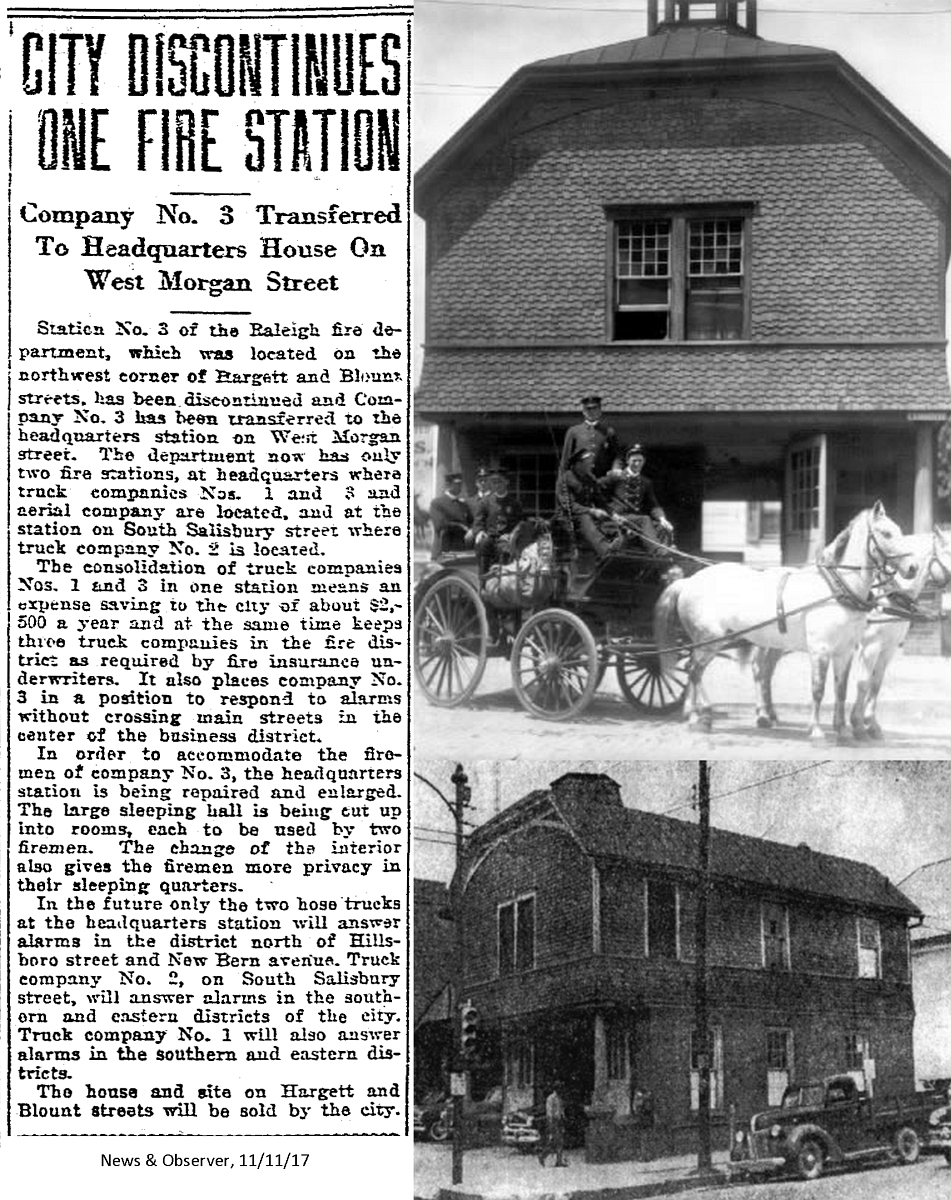 On June 12, 1919, the News & Observer reported that yesterday the city sold the old Victor Company firehouse for $7,500. And it would “immediately erect” a new station on East Martin Street, near Swain street.

The old station was sold to Interstate Motor Equipment Company, described as a “new Raleigh enterprise.” The new station was requested by many property owners in that part of the city. Since the closing of Station 3 in November 1917, there hadn’t been a fire station located east of business district. And response times were a factor, as responding apparatus to that area had to cross Fayetteville Street.

The cost of the new station had not yet “been compiled,” but would not exceed the amount received from the sale of the Victor Company station. No new equipment would be needed, as one of the two hose companies on Morgan Street would be relocated. Presumably, Hose Company 3 would be returned to their former quarters.

On September 8, 1919, the News & Observer reported on details of the planned new station. The “handsome building” would cost about $3,500. The one-story building would be “bungalow style with a large front,” with “five bedrooms, bath, and truck space.” Until it was completed in about three months, the old Victor Company station would be re-activated. This would eliminate the “dangers of [traveling through] the business district traffic.” And eliminate at least one truck crossing Fayetteville Street, called “the principal street where the traffic is heaviest.” 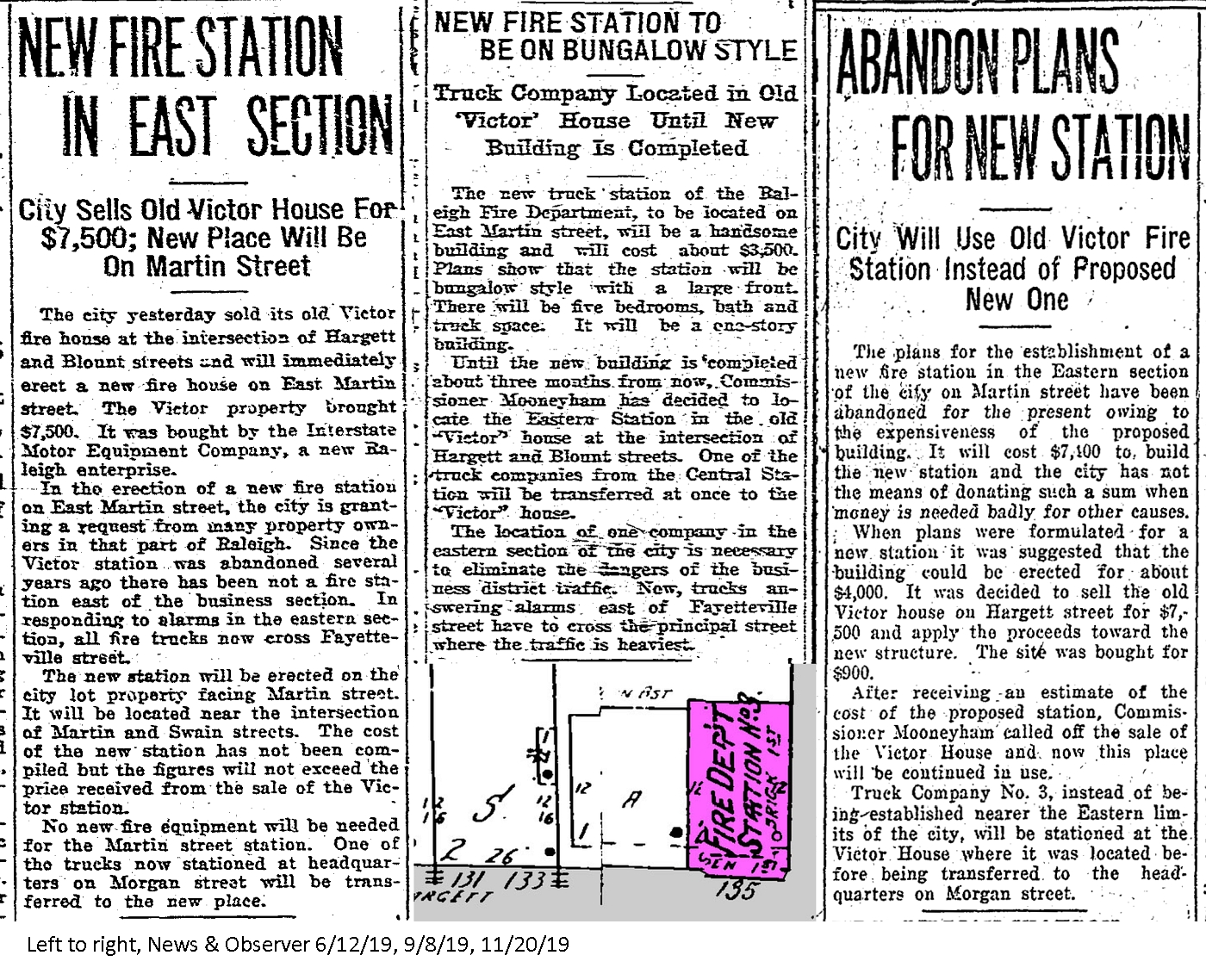 On November 20, 1919, the News & Observer reported that the plans for a new Station 3 on East Martin Street had been abandoned. The $7,100 building cost was too high and “the city has not the means for donating the such a sum when money is needed badly for other causes.”

When the new station was first planned, a building cost of about $4,000 was anticipated. Thus they decided to sell the old Victor Company station for $7,500, and apply the proceeds to the new facility. The Martin Street site was bought for $900. But after receiving the estimate of the proposed new building, city officials called off the sale.

Hose Company 3 would remain in their former quarters, which had been occupied from 1913 to 1917. Had they already moved back into their station, as the September story said would happen. Believe so, as a September 29, 1919, story reported on a department reorganization that had Hose 3 back at the corner of Hargett and Blount streets.

Today, Station 3 is the second oldest active fire station in the City. It is planned for replacement in the coming years, with a new Station 3 planned for a site on Rock Quarry Road, near the junction of Raleigh Boulevard.

Read blog post about the site for the new Station 3.