This is a re-posting of a 2009 blog post, from our blogs archive site. It was originally posted http://legeros.com/ralwake/photos/weblog/pivot/entry.php?id=2582 at on September 12, 2009.

For your Saturday evening enjoyment, here’s a small booklet bought on eBay of Charlotte Fire Department rules and regulations from 1940.

The contents includes duties for all ranks and roles, directives on responding to fires, and general rules. Plus additional pages listing apartment houses, hotels, alarm boxes, and a street directory. It’s a great snapshot of the time. I’ve scanned the main pages, plus a sample of the additional sections. 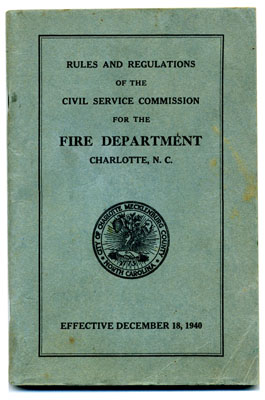 See also this earlier posting about a similar booklet in Raleigh.

Legeros: There are quite a few gems in here, and which were probably present in most department’s rules and regs in that time. Once a week, company officers were required to visit personnel who were sick, and report on their condition. Off duty members wanting to leave the city were required to get permission. And keep in touch at all times by telephone. Since, in the event of second or general alarm fires, they were required to report for duty. And, my favorite, “proper decorum must be observed at all times, no altercations or ungentlemanly, profane, abusive or improper language or disorderly conduct will be permitted at any station upon the part of any officer or member of the department at any time.”