The June 1911 issue of Fire & Water Engineering Magazine, Issue 24, Volume 49, featured this story on a fire protection report issued by the National Board of Fire Underwriters. Read more about the 1911 report, as well as the 1924 report and 1931 report.

Editor’s Note: This report compelled city officials to reorganize the fire department as a full-time, full-paid entity. It was placed in service in December 1912. The city’s volunteer fire companies all ceased operation. 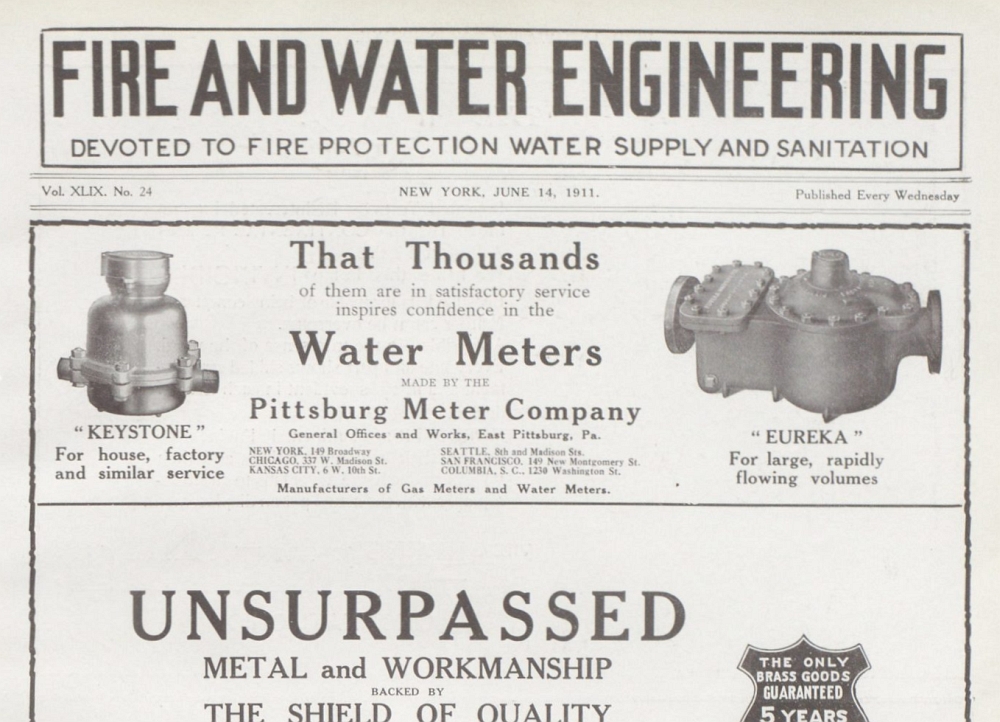 Fire Protection is Weak at Raleigh

Raleigh, N.C., has just passed the scrutiny of the Committee on Fire Prevention of the National Board of Fire Underwriters, which reaches this conclusion as to the city’s fire hazard:

“In the principal mercantile district blocks arc compactly built up along the street fronts only with joisted brick buildings, mainly of moderate height and area and with unprotected floor and roof openings. Many are of hazardous occupancy, a few are of considerable height, a number have large or excessive areas and there are many frame buildings, porches and extensions. The main street is sufficiently wide to afford a vantage point for fighting a fire, except during the occasional high winds, but the fire department is extremely weak, the water supply is inadequate and unreliable and overhead wire obstructions are serious, making spreading fires probable. Manufacturing plants are isolated and the more important ones are equipped with automatic sprinklers or other private lire protection. Residential sections are mainly frame, with shingle roofs, and, in the compactly built portions, conflagrations are probable.”

Raleigh has a population of over 20,000 and covers an area of 4 miles. The elevations above the sea level range from 211 feet at the southern city limits to 380 feet near the western limits.

The system supplying water to all built-up parts of the city and to several consumers just outside the city limits is owned and operated by The Wake Water Company; the original works, built in 1887, have since been materially remodeled and enlarged. The company is operating under a state charter, granted in 1895, and under a franchise and contract with the city, covering a 15-year period beginning December 7, 1906.

The contract provides that the company shall maintain pumping capacity and a supply of water, adequate to the needs and demands of the city, with power sufficient to discharge six [2 1/2?] inch nozzle streams using 50 feet of 2 1/2-inch rubber hose taken from six separate hydrants located in the business part of the city to a height of 100 feet or its equivalent in pressure, say 60 pounds, from the mouth of said hydrants and at another time to throw from separate hydrants in other portions of the city four such simultaneous fire streams; that the company shall at all times be prepared to furnish effective hydrant streams without the aid of portable engines, from hydrants having a pressure from water tower of not less than 40 pounds, and from direct pressure not less than 60 pounds per square inch. Such pressure maintained at the hydrants to be the measure of liability of said water company, which shall not be responsible for the proper application of the water.

A water tower of at least 100,000 gallons capacity shall he maintained at an elevation of 110 feet above the street level at Capitol square, which tower shall be connected to the street mains by a pipe of diameter not less than 12 inches, in which pipe there shall he a valve which can be closed and thereby allow an increased pressure to he carried on the street mains. The city shall rent at least 137 hydrants at the rate of $32.50 per year, may order extensions to street mains not to exceed 2 miles in length during any one year, provided ten hydrants he set per mile of such extension and paid for at the above-mentioned rate and may cause additional hydrants to be set on existing mains by paying for each hydrant an annual rent of $25.

Supply [is] taken from Walnut creek flows by gravity from small intake basin through a long line of pipe to a suction well at pumping station; it is treated and pumped through filter plant to large clear water reservoir, from which it is again pumped direct to a single service distribution system, to which is connected a water tower acting as an equalizer. Pressures are raised as called for on alarms of fire.

Walnut creek has a drainage area above the intake of 13,87 square miles; the minimum annual rainfall recorded in the past twenty-five years is 38,57 inches. The minimum stream now recorded is 2,500,000 gallons per day, or about 25 per cent, in excess of the maximum day’s pumpage. A timber sill bolted to rock ledge forms a basin with practically no storage capacity in which is a small screened intake; this intake is connected by approximately 3,500 feet of 18-inch terra-cotta, 2,000 feet of 18-inch cast iron and 4,500 feet of 14-inch cast-iron pipe to suction well close to pump room, from which the low-lift pumps take suction; this line has a capacity of about 2,000,000 gallons per day. An emergency intake of 14-inch pipe is located on this same creek, 1/2 mile below the main intake. The low-lift pumps may discharge the treated water either through the filter plant or direct to clear water reservoir. The high-lift pumps, through independent, cross-connected suctions, take water either from clear water reservoir or from clear water well in filter house.

The filter house is located 125 feet northwest of pumping station and is a one-story brick building, 50 feet square, with metal-covered roof on wooden sheathing and trusses; earth floor. The plant consists of six mechanical filters with a combined rated capacity of 2,500,000 gallons per day and a 100,000 gallon settling tank located at one end of filter house. Clear water reservoir is located about 200 feet from boiler house; elliptical in plan, about 14 feet in depth and holds approximately 2,000,000 gallons; lined with masonry.

The pumping station was built in 1888 and located on the north bank of Walnut creek, about 7,000 feet south of the principal mercantile district; pump and boiler room floors, at elevation 233, are well above the highest flood levels. Except for the smaller of the low-lift pumps, which is in poor repair, the equipment is well maintained and operated. One low-lift and one high-lift pump with two of the boilers are ordinarily in operation throughout the twenty-four hours. The small boiler, which is ordinarily kept in reserve, is not suitable to furnish steam in case of emergency in conjunction with either of the other two boilers. Steam piping is installed in duplicate.

The water tower is located one block outside the principal mercantile district; steel tank, 30 feet high and 21 feet in diameter, supported on octagonal brick and stone tower, 85 feet high. Contains 100,000 gallons with high water elevation at 465. A 12-inch connection to street main is provided with hydraulically operated valve, which is closed when fire pressures are called for. The average daily consumption last year was 1,241,517 gallons and the daily per capita consumption was 65 gallons.

A recording gauge is installed in the main office at the water tower at elevation 356, and day and night pressures are uniformly maintained at between 40 and 18 pounds, at which latter pressure the tank overflows. The records indicate that during all of the recent fires, when direct pressures were called for, an average of 75 pounds was well maintained at the tower; only very small quantities were, however, used at the fires. An average of about 125 pounds during domestic draft and 175 pounds during fires has been maintained at the pumping station. In one service supplied by pumping from a single station with a water tower acting as an equalizer except when shut off and pressures increased for fires.

A 14-inch force main extends from the pumping station, a distance of 3,345 feet, to the southern city limits and continues as a 12-inch feeder north through the principal mercantile district, a distance of 5,800 feet, to the water tower. A 10-inch secondary feeder continues through the central portion of the city to a point three blocks north of the Capitol. Minor distributors are largely 6-inch with considerable 4-inch and a very small percentage of 8-inch pipe. Dead ends are frequent in the outlying sections and there are several instances where lengths of 6-inch pipe, 1,500 to over 3,000 feet between intersecting mains extend through fairly well built-up districts.

There arc 170 public hydrants. The average linear spacing of hydrants in the principal mercantile district was found to be 330 feet and the area served by each, 155,000 square feet. In a representative residential district the average spacing was 500 feet and the area served by each hydrant was 199,000 square feet. Tests at 19 hydrants in six well distributed groups were made by national board engineers in April, 1911 to determine the probable supply available for fire protection purposes. Three or four hydrants were included in a group; all were opened simultaneously and the free discharges measured by means of Pitot tubes.

During all the tests excessive lowering of pressure was observed, indicating that greater quantities could not be obtained with more hydrants open and that only a few even moderately effective direct hydrant streams would he available. In general the poor results are due to insufficient carrying capacity of the supply main, the very pronounced lack of support to mains of small diameter and the serious effects of poor gridironing.

The fire department consists of 119 members as follows:

Five drivers and a hoseman full paid; chief, assistant chief, engineer, stoker and 12 men part paid; 97 volunteers. During the year ending February 28, 1911, $10,064 was paid for the maintenance of the fire department. This is about 52 cents per capita, based on a population of 19,218.

The chief and assistant chief are elected by the board of aldermen for two-year terms. The present chief, L. H. Lumsden, has served four years. William Taylor is assistant chief. The chief serves as secretary of the department.

There are three hose companies and a ladder company in service; there is also an engine company equipped with a steam fire engine, which responds on call. Each company elects a foreman, assistant foreman, secretary and treasurer.

A 600-gallon reciprocating steam fire engine is held in reserve at headquarters. It is provided with two 4-inch 11-foot stiff suctions and basket, two play pipes with 1 to 1 ½-inch ring tips, a 4 to 2 1/2-inch reducer and two Siamese connections. The engine was tested by national board engineers and found to be in good condition and well handled by the operating crew. The boiler appeared to steam slowly, although coal possessed good steaming qualities. The engine delivered 574 gallons, 96 per cent, of its rated capacity, against a net water pressure of 145 pounds, and showed only 5 per cent, slip.

The three hose wagons are of the plain type and in fair to poor condition; they lack much necessary minor equipment. Two of the wagons are provided with rubber tires. The truck in service carries 12 ladders, including 2 pompiers and 3 with roof hooks; the two longest ladders are 35 feet and 30 feet in length, respectively. The truck is in only fair condition and lacks much essential minor equipment.

Conflagration Hazard — In the principal mercantile district, buildings are mainly of moderate size and height, closely grouped, and of joisted brick construction, with very little protection against exposures. Many are of hazardous occupancy, some fairly high and several of excessive area. Streets, except the main street, are of only fair width, the fire department is very weak, the water supply deficient and unreliable and the danger of spreading fires is high. The manufacturing plants arc isolated and generally well equipped with private fire-fighting appliances. The compactly built frame residential sections present the usual serious hazard due to flying brands on the shingle roofs.