Found on eBay, vintage image of Greensboro’s lighting unit, which appeared in a 1954 ad for Onan.

Notes the accompanying ad copy, “built to the specifications of the [department], this power unit incorporates many new ideas. Both sides of the truc, for instance, hold identical equipment. Located in the many steel compartments are four 500-watt floodlights, five 150-watt hand lights, electric saws, suction fans, electric drills, two 300-feet reels of light cord, an acetylene cutting and welding outfit, and dozens of other items.”

Also, “Four more 500-watt floodlights are mounted on top of the truck on standards which can be raised to 4 1/2 feet above the truck roof.” And “power for all electrical equipment is supplied by an Onan heavy-duty, 10,000-watt, water-cooled electric plant. Its dimension allow it to be plced across the truck body behind the cab. The plant is started electrically.”

The truck chassis is a Dodge. Maybe readers know the model. Presuming 1954 model year. How long did the truck serve? Unsure. Might’ve had a chassis upgrade in the 1970s or 1980s. Recall a cab-over truck with a similar body.

Also, GFD operated a salvage unit beginning in the 1955. Here’s a blog archives article about that truck. 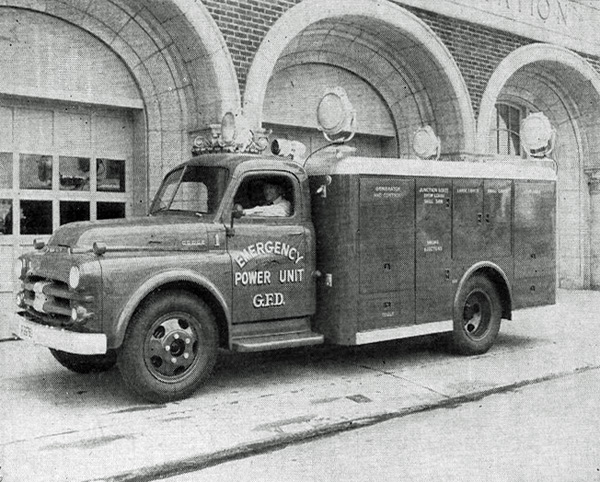