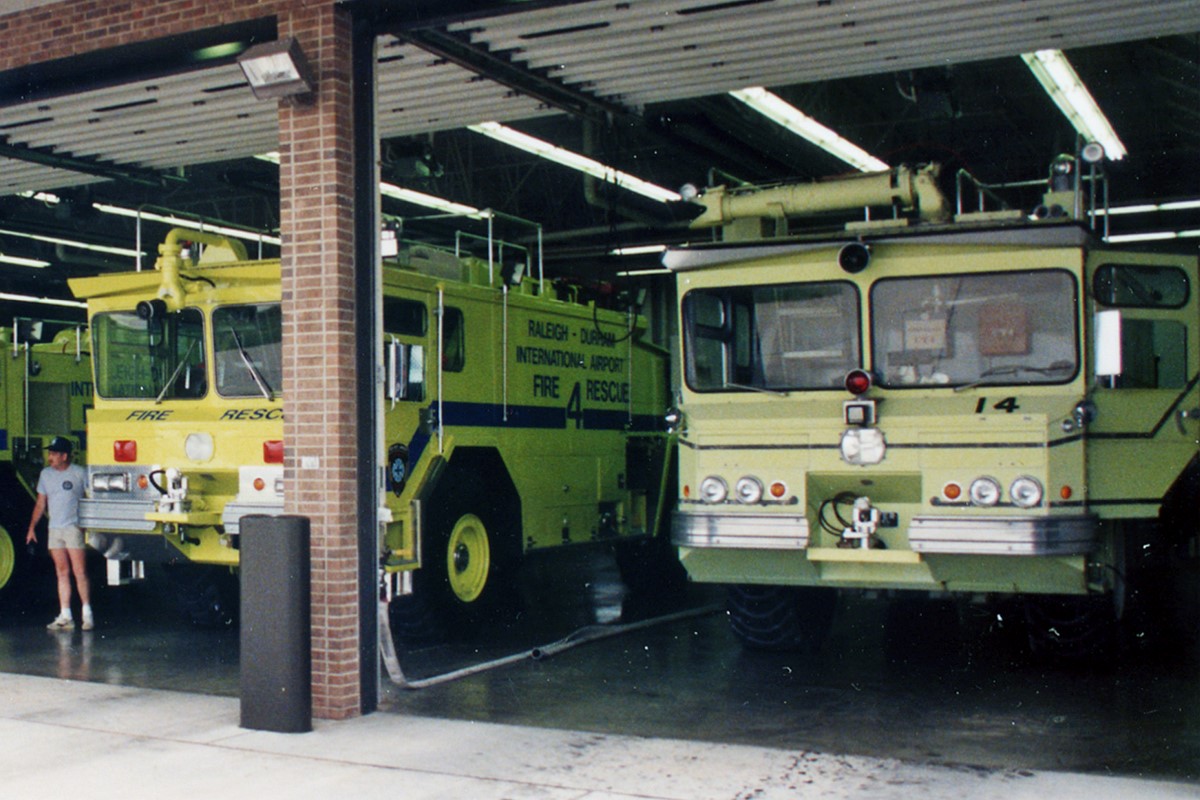 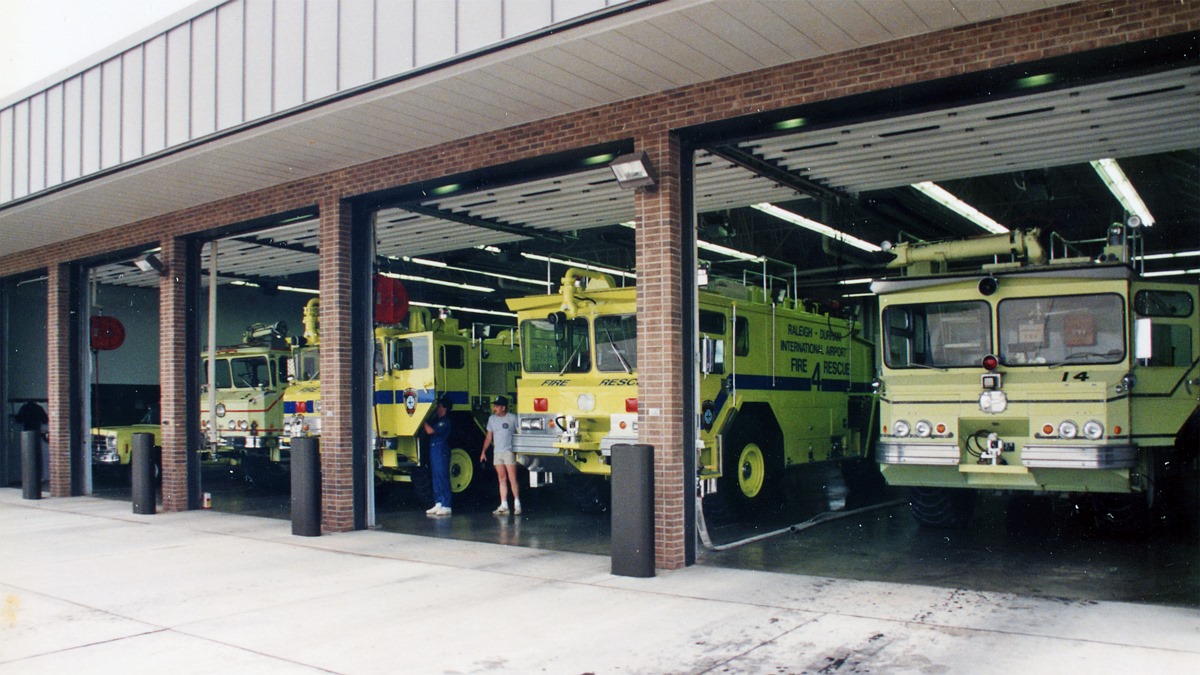 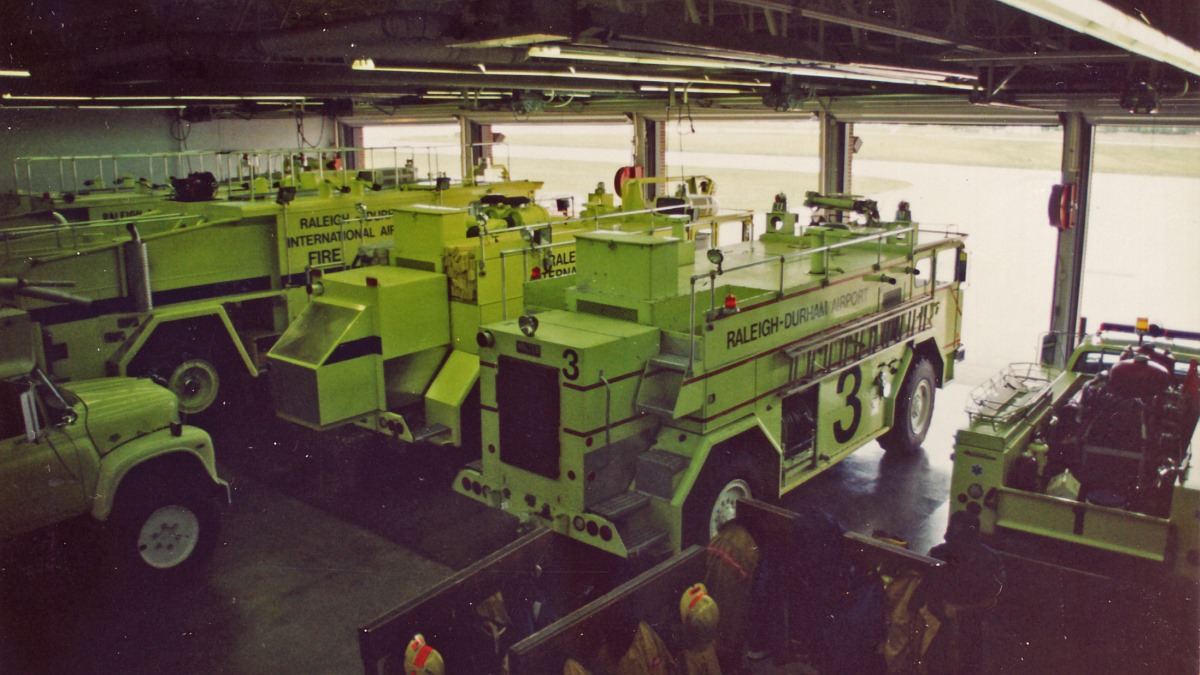 Did the airport fire department have one or two Walters CB3000 crash trucks, back in the day? Wait, doesn’t story go that the 1973 Walter CB3000 (delivered new) was re-manufactured by Crash Rescue Equipment Services in/around 1990? Yes, that’s the long-told story.

Then a certain fire historian heard an interesting story the other day. He’s resumed his research on RDU CFR history, and an old-timer told him, “I seem to remember that one of those rehabbed Walters was from a different department. It was a replacement that was already built, and not one of ours.”

Wait a minute, what?

First, let’s review the details of the airport’s ARFF rigs, from the 1970s to the 1990s. After the delivery in 1969 of an International/Ansul dry-chemical/light water rig, the airport obtained an ex-Army 1959 Walter Class 1500 crash truck. This met their need for “big water/big foam” until the purchase of a new 1973 Walter CB3000. Four years later, a second crash truck was purchased, a new 1977 Walter B1500. And after which, the 1959 Walter was presumably disposed, and later parked as a permanent exhibit at the Durham Museum of Life and Science. 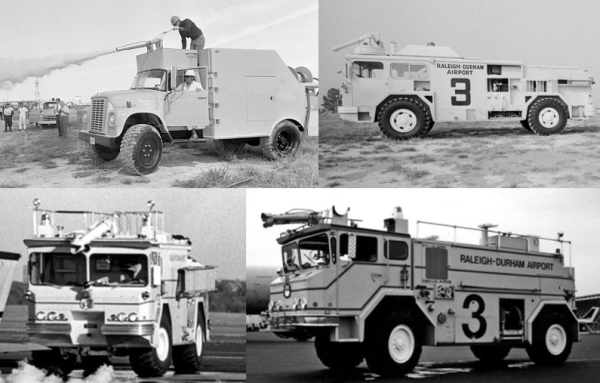 Three crash trucks, plus an earlier ex-Army 1946 International/Bean Class 125 pumper (below left) that was replaced in 1979 by a Chevrolet/Reading utility body truck with a skid-mounted dry chemical system. (Said skid system was previously mounted on a pick-up truck. There was also a second skid system, mounted on a pick-up truck and later a trailer.)

And with those four rigs (CT1 through CT4), the airport entered the eighties with a quartet of new or somewhat new apparatus:

By the end of the decade, however, an upgrade was in order. Three “big water/big foam” trucks were needed, instead of two. And improvements were sought for the two 1970s Walter crash trucks.1

In October 1989, a third crash truck was delivered, a rebuild of a 1970s Walter B1500 by Crash Rescue Equipment Service (CRES). As old-timers tell it, the rig was identical to their 1977 Walter B1500. And the original B1500 was subsequently sent to CRES, for it’s own rebuild. The 1977 truck was rehabbed from top to bottom and with improvements ranging from new turrets to added air conditioning.

1Why the need for a third water/foam truck in 1989? Probably the result of the new runway in 1986, and the larger aircraft later using the 10,000-foot strip. Also, the 1969, 1973, and 1977 crash trucks were getting older, with more likelihood of a truck being out of service. And without another unit of equivalent capacity, they’d be in trouble.

As for the 1973 Walter, the original story said that it was also rebuilt by CRES. That’s what folks remembered and historians (including myself) have recorded. But then we (meaning me) noticed these pictures.

And if the “12” designation referred to a “displaced rig,” wouldn’t the same logic apply to a “14” designation? Curiouser and Curiouser.

Next, Mr. Historian (you know him as Mr. Blogger) carefully compared photos of the 1973 Walter as CFR 14 with the subsequent CRES rehabbed version. Practically identical! Sure appeared to be before and after pictures.

Then came the a-ha moment. Look at the photo on the left. Notice the door of the rig behind CFR 14. Slanted stripe. Now look at this group photo of the airport’s three CRES rigs. Two of them have straight stripes. Only one has a slanted stripe. The rehabbed CB3000.

Thus the likely interpretation–and really that’s all historians are able to do, which is interpret history–is that the 1973 Walter CB3000 never left the airfield, and a second CRES-rebuilt Walter CB3000 was delivered circa 1990.

This interpretation is further reinforced by a log book entry in November 1990. It reads “foam nozzle cleaned on CFR 4” and “hose repacked on CFR 14.” Ergo, both rigs on site at the same time:

With signs pointing to yes, Legeros contacted a former fire chief at the airport. He confirmed the conclusions drawn above. He also noted that CFR 4 (1989 CRES/197_ Walter) and CFR 14 (1973 Walter) were operated in tandem while the 1977 Walter was being rehabbed by CRES. Once the returned, CFR 14 was disposed to CRES. e.g., a trade-in.

But Still a Few Questions

See this apparatus history page for the complete list and details.

Now, How About a Second Mystery?

Where did the two CRES built crash trucks originally serve? Good question. To be determined. The 1989 CRES/197_ Walter CB3000 was apparently wrecked when new, at its original airport. The incident also involved a fatality. When and where? To be determined. Was the truck first repaired by Walter, and later re-rebuilt by CRES? To be determined.

One more mystery to solve!

And a Visit to CRES

Our friends at the airport fire department also shared these pictures of a visit to CRES in December 1988. The plant is located in Dallas, TX. 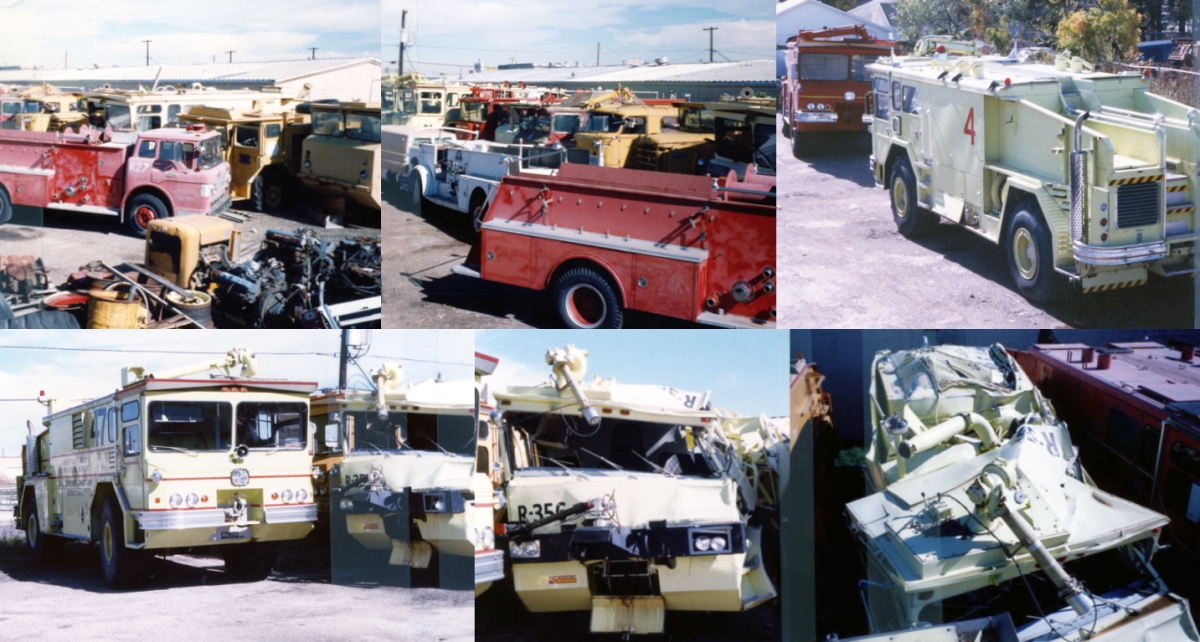 Notable sources for this blog posting: