On November 6, 1915, the “largest fire in Raleigh’s history” threatened an entire city block, as the News & Observer and other buildings burned. Two firemen escaped death, as a building collapsed upon them, as they sprayed water from a rooftop. Windows melted across the street, flying embers started fires. Sound familiar?

The 6:05 a.m. blaze started on the third-floor of a four-story  printing company, and soon spread to the buildings next door, including the two-story News & Observer building, and the second time in three years that the paper’s plant and offices were destroyed by fire. Five people were injured, including four firemen including the two mentioned above, and over $300,000 of property were destroyed.

The intense blaze produced embers that started ten other fires in the vicinity, and charred paper was reportedly picked up as far as Apex, sixteen miles away. The crowd of spectators that gathered was compared to that of the State Fair.

Read about this historic blaze on the Raleigh Fire Museum web site. 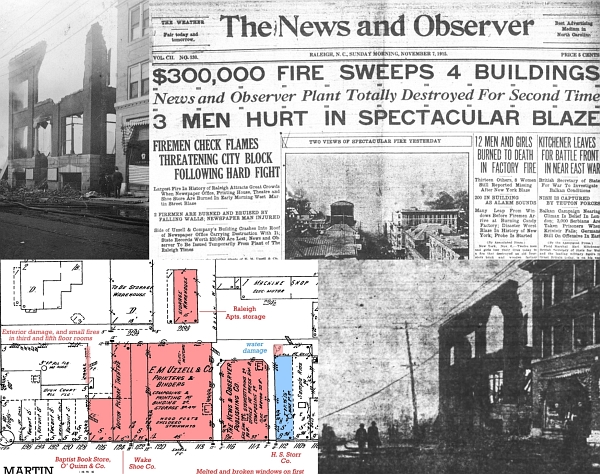