In July 1926, the North Carolina State Firemen’s Association acquired a fire engine. At the annual convention and tournament, held that year in Morehead City, they took delivery of a new American LaFrance Type 40 combination chemical hose wagon. The truck was presented as a personal gift from the southern manager of American LaFrance, Mr. P. O. Hebert. He refused to accept payment, and said it was a personal testimonial of the “personal interest he always felt,” attending meetings “in the welfare of the Association.”

The truck was obtained for use in the annual tournament, which had been restarted and revitalized in recent years. The yearly races–which started with the first annual convention in 1889–were suspended during World War I, during the years 1917, 1918, and 1919. As was later recounted, “the time had come for every patriotic organization to devote its time and efforts to helping the Government win the war.”

By 1919 and with “conditions being back to normal,” President James McNeill pledged to bring back the event. However, the era of the horse-drawn apparatus had passed, so new contests for motor trucks were created. The first was held in 1920. And by 1925, the Association decided that they needed their own truck for the tournament, to help relieve the burden of participating departments.

A committee was appointed to this task at the 1925 convention, and the truck was delivered the following year. The truck was named the James McNeill Truck, in honor of the longtime President. And it was used by the Association until the Second World War, when the tournaments were again suspended.

In 1944, the Executive Board of the Association decided to sell the truck, which was then “sitting in Greensboro.” By June 1945, it was reported as sold.

Below is a history of this truck. See also this Facebook posting, with a query from Mr. Blogger about its whereabouts today. 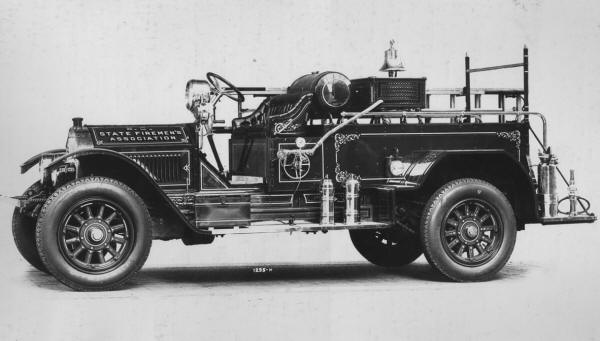 Plus these specs, typed on the back of the factory photo: 85 HP, four-cylinder motor. Body for 1,200 feet of 2 1/2-inch hose. Pneumatic tires. Chemical tank. Electric hand lantern. Play pipes and shutoff nozzles.

Note that all dates refer to events occurring at the annual convention, unless otherwise noted. Page numbers refer to the annual printed proceedings. Read some of those proceedings at https://legeros.com/history/fa/.

1916 – Raleigh
Tournament held on July 19, 20, 21. Consists of hand- and horse-drawn apparatus. Though motor apparatus had arrived around the state, beginning about 1910, they were not part of the annual event.

The contests consist of:

1917 – Morehead City
No tournament, due to war conditions. Convention was originally planned for Asheville, and with a “big and perhaps final tournament.” Due to the war, however, they decided to wait, and meet in Morehead City instead, and the tournament was eliminated. (1918, p31)

1918 – Wrightsville Beach
No tournament, due to war conditions.

1919 – Asheville
President James McNeill notes that the city was originally planning a “big Peace jubilee and [fireman’s] tournament” but that was “found to be impossible” as the railroads were still being operated “under war conditions” and the Association couldn’t make any arrangements to get their “usual reduced rates, much less any transportation privileges”, which was required for departments to bring their hand- and horse-drawn apparatus to the races. (1919, p49)

Membership “unanimously [instructs]” the President to reinstate the tournament as part of the annual conference. (1920, p11)

1920 – Fayetteville
President McNeill reports that after “quite a volume of correspondence” with the member departments [which in 1920, represented 83 cities and towns], he found it impossible to restart the tournament as it was done before. He could get only four wagon teams and maybe three reel teams to [commit to] attend. And such a small number would have made it impractical, to go to the expense of [having] the “grandstand [built]” and other “things necessary to pull off a respectable tournament.”

Therefore, he formulated a “set of rules” for a motor contest, and tried them in Fayetteville with his fire department. When the Executive Committee came to town, he had them watch a couple of the practice runs.

He then personally visited “quite a number” of departments and “personally coached them on the details.” This was well-received and he quickly had over 20 accepted invitations. However, a number of them had since cancelled. Also, “so many of the Eastern departments” had failed to respond. (1920, p10)

He “used every argument that I could” with the Eastern towns other than Kinston, he reported, but they wanted to wait until next year, after seeing the results of this year’s contest. (1920, p11)

The new rules for Motor Contests were approved by the membership of the convention. The speed of the participating trucks was also increased from 20 to 25 mph. (1920, p33).

The tournament was held on August 11, with two motor contests. One for fastest water, with 17 teams competing, and the other for fastest chemicals, with 13 teams competing. On a following day, a Consolation Contest was held, though the winners were not entitled to a prize. Seven teams each competed. There were also contests for “coupling breaking” and a “100 yard dash” with a hand reel. (1920, p43-45)

1923 – Durham
Request by a member to lower the speed of the motor apparatus race from 25 to 20 mph. “You buy an apparatus and you pay anything from $8,000 on up, and put a man on there, and load the apparatus to its capacity, and hurl it through space at a rate of 25 miles an hour, the rate of an express train. I think that is wrong. The fire department is supposed to save property, not destroy it.”

President McNeill notes the origin of the motor race, and that North Carolina is the only state with “this mode of racing.” In the horse days, the speed was 18 to 25 mph. The  motor test rules he designed were set at 20 mph. The members last year [actually, in 1920] voted to increase to 25 mph, he reminds them. He says he will ask the Secretary to bring this up at the next [annual?] meeting. (1923, p63) 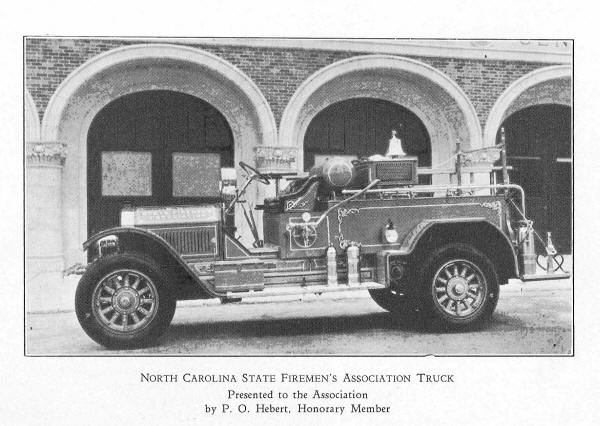 1925 – Asheville
The Secretary presented proposal that they acquire an American LaFrance Type 10 motor truck, to be owned by the Association for tournament use. He says he was asked to present this proposal, because the tournament is “very hard” on the apparatus that departments bring to participate. The proposal is a request that they look into acquiring their own truck and, if possible, at no expense to the Association. Committee to be formed. Approved. (1925, p75)

Tournament on July 16, with 24 motor teams and five reel teams.

1926 – Morehead City
Report on the committee appointed at last year’s convention to “secure a fire truck” for the Association. They acquired an American LaFrance Type 40 combination chemical hose car, valued at $8,500, and donated by Mr. P. O. Hebert, southern manager of the American LaFrance Fire Engine Company. Truck to be placed in a centrally located city, with a “capable mechanic” to “look after,” and can be loaned to any city or town that has an apparatus accident, etc., and to be known as the James D. McNeill car. Motion also adopted to get Mr. Hebert, the donor of the fire truck, an “expensive souvenir” in appreciation. (1926, p66-67, p79)

Discussion of where the Association truck will be housed. One person [Chief of CHFD?] suggests that it be housed in Chapel Hill. Decision for placement “will reside” with Executive Committee. (1926, p78-79)

Also at the convention, a committee is appointed to “secure a reel” for the Association to bring to each tournament. The following year, it was reported that High Point FD donated a reel, and it was repainted. (1927, p88)

1927 – Greensboro
President A. L. Duckett mentions that James McNeill passed away [that year] and his funeral was attended by the Executive Committee and many firemen. He also notes that McNeill’s body was carried to the burial by the Association’s fire truck, which was given to the Association in 1926, and is named for him. (1927, p31-32)

A report is made on the Association’s American LaFrance fire truck, including its history. The truck was presented to the Association in 1926, at the Morehead City convention, by Mr. P. O. Hebert of Atlanta.

In 1919, after three years without a tournament, President McNeill vowed to bring it back. But horse-drawn apparatus “had passed” so he pledged that, if the convention met in his town [of Fayetteville] in 1920, he’d have a “motor truck test [contest]” ready. The new rules included that each host city supply a truck, etc., for the contest.

At the 1925 convention, “the boys” concluded that it was time for the Association to own its own truck for the contests. A committee was appointed and they decided on American LaFrance as the brand. The truck was presented the next year at the Morehead City convention for acceptance. The purchase was approved, but Pat Hebert would not accept payment. He presented it as a personal gift, and as a testimonial of the “personal interest he always felt,” attending meetings “in the welfare of the Association.”

Subsequently at the 1926 convention, a new committee was appointed to present “some token of appreciation” to Mr. Hebert for the “many things that he had done” for the Association, and “more especially” in appreciation of the fire truck that he donated.

In October 1926, the committee traveled to Atlanta and presented Hebert with a special book, with extracts from the proceedings about his donation, and more. (1927, p58, p63-64). 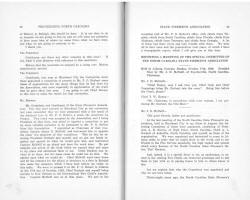 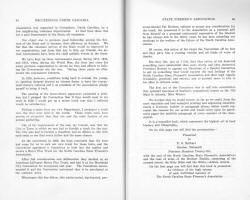 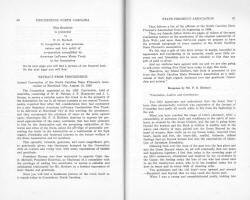 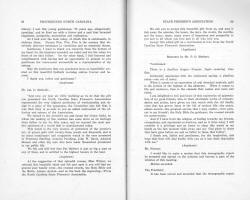 Retired Fayetteville Fire Chief and longtime past Association President (and charter member) Captain James D. McNeill died on February 9, 1927. He was 76 years old. He was buried on February 11, with the Association fire truck that bore his name carrying his body from St. John’s Episcopal Church to its final resting place.

The Fayetteville Observer reported that the funeral was the largest in the city’s history, with the exception of that of McNeill’s beloved father, Rev. George McNeill, who died in 1861 [at age 33!]. “As the funeral procession wended its way to the cemetery, sirens moaned and a bell in the city tolled slowly,” reported the March 9, 1927, issue of “Fire Engineering” magazine. 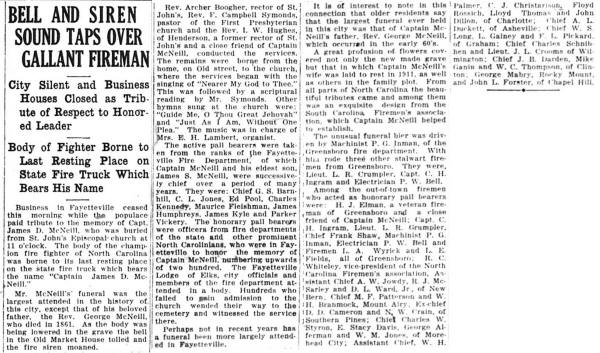 1944 – Charlotte
Disposition of the Association motor truck is discussed. The tournament used to have races with horse-drawn apparatus. Then the railroads “decided” they would have to charge for transporting the horses and equipment, so the tournament was ended. About that time, the auto fire engines “came into use,” so new contests were created. But some departments wouldn’t send their motor cars to compete, so the Association obtained a “second hand auto”[1] for its use. For the past few years, however, no races “have been had.” And “the car is sitting in Greensboro.” Recommend disposing of the truck, and putting the money into the fireman’s [relief?] fund. Approved. (1944, p84)

[1] This appears to be incorrect. Based on accounts and the factory photo, the truck was delivered new.

1945
No convention due to war conditions.
On June 21, 1945, the Executive Board met in Salisbury and passed a resolution postponing the 1945 convention. They also reported the sale of the Association’s fire truck. (1945, p5)

1946
No convention due to war conditions. 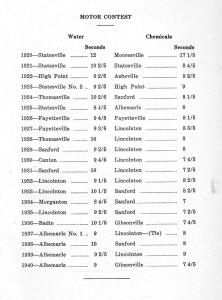 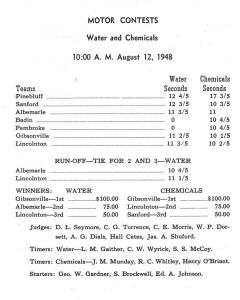 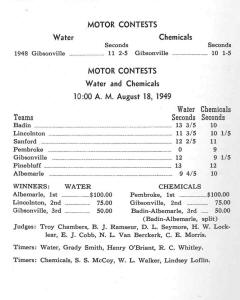