August 5, 2017
After a visit to the Asheboro public library, and the local history room, I’ve updated this posting with more information. See the Courier-Tribune citations below.

March 24, 2016
Did you know that the North Carolina Zoo had a fire truck? And that the truck originally served in Wake County?

As the story goes, the Six Forks Fire Department donated their 1961 International/_____ pumper, which was their original Engine 2. They’d had the truck for a decade-plus, and perhaps was delivered new. (Or maybe built new? The body looks it could be shop-built.)

Construction on the zoo started in 1974. By that time, SFFD was operating at their fourth fire station on Lynn Road. Here’s a Blog Archives posting, with a profile of SFFD in 1971, when they still lived on Six Forks Road.

The truck became the zoo’s first fire truck, after the park was opened in 1974. Who staffed the thing? How was it used? How often did it respond to call? To be determined times three. The park also has a hydrant system and the hydrants look like they’ve been there from the get-to. (We visited a few weeks ago.) 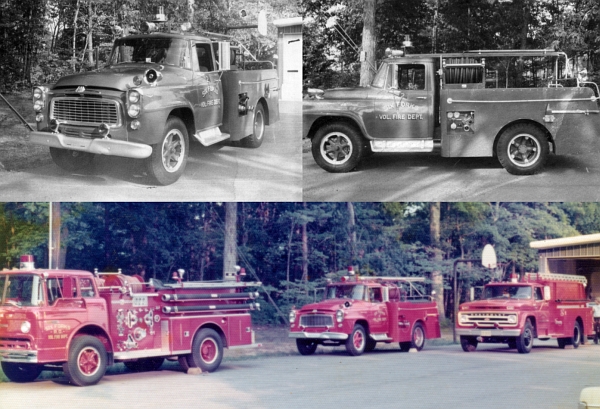 ASHEBORO – It’s big, red and has four wheels and a siren, and it’s a Christmas present to the North Carolina State Zoological Park from firemen across the state. It’s a fire truck equipped and refurbished at a cost of $6,000. Zoological Park Director Bill Hoff said that he and park officials were very happy to get the truck as a gift.

The idea to give the truck to the zoo originated in 1973 when the Wake County Firemen’s Association set up a zoological committee to raise $30,000 to buy a new fire truck for the zoo. The Wake County firemen got the ball rolling by donating $500 and then asked the other fire districts across the state to contribute.

More details are found in a Courier-Tribune story dated December 12, 1977, and titled “Zoo Gets A Fire Engine For Christmas.”

Wait, buying a fire truck for $30,000? Does that mean that the Six Forks truck was a temporary unit, and a $30,000 rig was subsequently purchased? Don’t think so. Sounds more like $6,000 was raised, to rehab and outfit the Six Forks truck. [Legeros: Correct, as the subsequent news story confirms.]

How long did the zoo operate its own fire apparatus? As least as late as 1985. Found this document from October 1985, which notes that the responsibilities of security officers included operating the zoo’s fire truck.

Today, the zoo is protected by the East Side Fire Department. They were organized in 1968. When did they assume fire protection of the park? To be determined. Perhaps readers can assist with more information, or even some pictures. Surely some shots are sitting out there, somewhere. And even if your name isn’t Shirley.