From the files of reader/contributor David Raynor, here are vintage photos of two unusual rigs from Shelby, NC. That’s Cleveland County, to the west.

Top is Water Tower 30 (also called Ladder 30 at some point), a 1983 Ford F800 with local bodywork and a 35-foot articulating “water tower.” A former electric company bucket truck, it was later sold to Grover Rural FD.

Bottom is a green (!) 1974 Seagrave aerial ladder, formerly Mill Creek, DE. Had a 1500 GPM pump, no tank, and 100-foot ladder. After serving in Shelby, it was repainted white over read, and served at nearby Cherryville. They later retired the truck, cut off the front of the cab, and used same as a teach podium at their fire station.

Both were photographed in December 1996. Thanks to Micah Bodford for the extensive apparatus details. Click to enlarge: 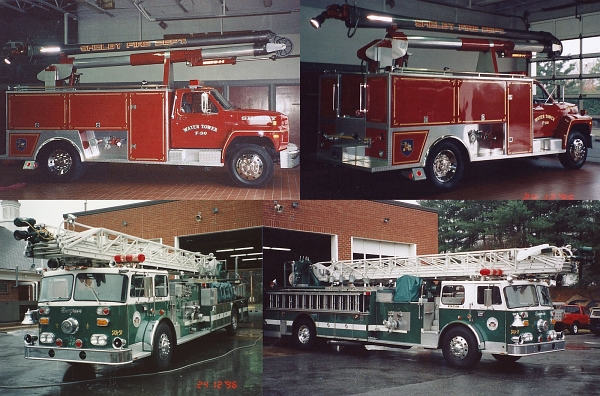