May 18
Chapelboro.com posted this story yesterday with a project update and a drawing. Town council will vote in June whether to approve the joint project, which will erect a fire station and four-story office building on South Hamilton Road.

February 11
News out of Chapel Hill. Town Council on Monday approved the sale of Fire Station 2 to a developer, who will replace the facility with a four-story office building that includes a fire station on the ground level. And a two-story parking deck. Here are some details as gleaned from stories in the News & Observer[*] and ChapelBoro.com.

East-West Partners is planning to purchase the primo property for $1.75 million, then lease the site back to the town. (With a 500-year lease!) The town will pay that back to the developer, to build the fire station. (They’ll add a bit of additional funding to the kitty as well. As may the county, if co-locating an EMS unit is desired.)

New Station 2 will be larger, and designed as a two-company station. Plus room for said Orange County EMS unit, which is presently housed on the UNC campus. The fire department will move their ladder truck (Tower 73) from Station 3 to Station 2, when the new station opens, notes the interim Fire Chief.

Where will Engine 2 reside during construction? The college has agreed to house the crew at an old fraternity house (!) near Finley Golf Course. Readers might have more details there.

This project has been cooking for a couple years. Town Council debated the project in September 2015, as reported in this Chapel Hill Watch posting. They revised the Memorandum of Understanding (PDF) between the town and the developer, first drafted in 2014.

That document includes a list of the station requirement, such as:

Next Up: Station 3 and Station 4 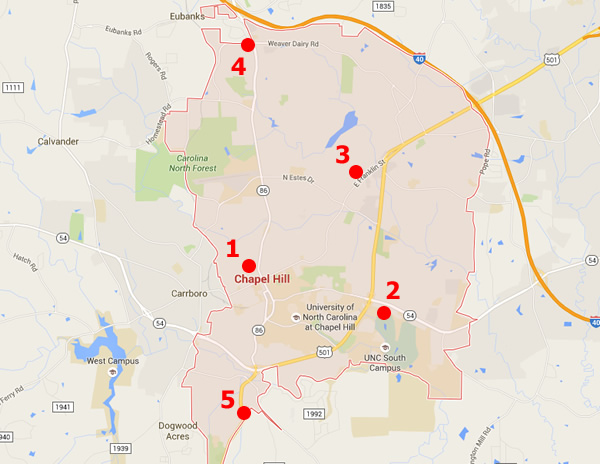 The project is the first of three planned station replacements. Station 3 (Elliott Road and E. Franklin Street) and Station 4 (Weaver Dairy Road and Martin Luthur King Jr. Blvd) are also in the queue for similar swaps.

On November 11, 2013, the town council passed a resolution recognizing that they needed three replacement fire stations, that they don’t have sufficient resources to replace them outright, and that they’re located on parcels that are highly desirable for likely commercial development. Thus they strategy of public/private partnerships, the first of which is the Station 2 project. (See that resolution, PDF.)

The Town Manager has noted that they’ve received proposals to buy the lots of Station 3 and Station 4, but they’re starting with Station 2 project before doing anything else.

Here’s a News & Observer story from October 2014, with a earlier project details, including noting that the town is planning (or was planning) to purchase a new ladder truck in coming years.