Then some weeks later, it’ll be moved to Station 2, which is being rebuilt on South Hamilton Road. That project is nearing completion. When it opens, Tower 72 will be moved there. Here’s a prior blog posting about the project.

Engine 32 is currently operating from a temporary station, just around the corner on Finley Golf Course Road. Here are some photos of their temporary quarters. 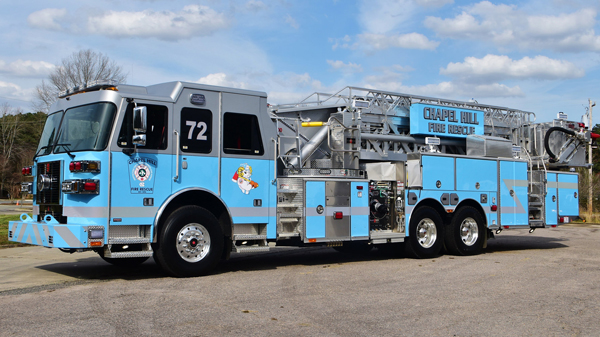 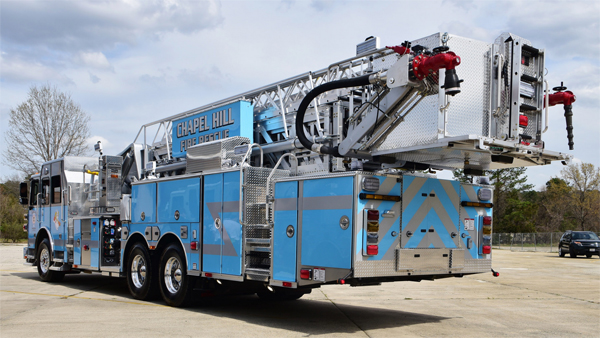 The $1.3 million apparatus was constructed in Dublin, Ohio. It took ten months to build. The replacement was needed as the older ladder has been plagued with mechanical problems, as this town news release notes.

Funding for the truck was paid for by two-thirds general obligation bond funds that the Town Council approved on January 18, 2017. That issuance of bond funds also completed payment for new radios.

Chapel Hill is also adding a second ladder company. Around the time that Station 2 opens, Ladder 74 will be placed in service as Station 4.

It will operate the current Engine 35, a 2014 Sutphen Monarch 1500/500/75′ mid-mount aerial ladder. With existing personnel. No new firefighters have been hired. (If staffing drops below a set level on a given day, Engine 34 will go out of service.)

Here’s the run-down on station assignments, after Station 2 opens and the moves are completed:

Watch this space for updates.

Here’s a map of the town’s five fire stations and their primary response areas. Click to enlarge: 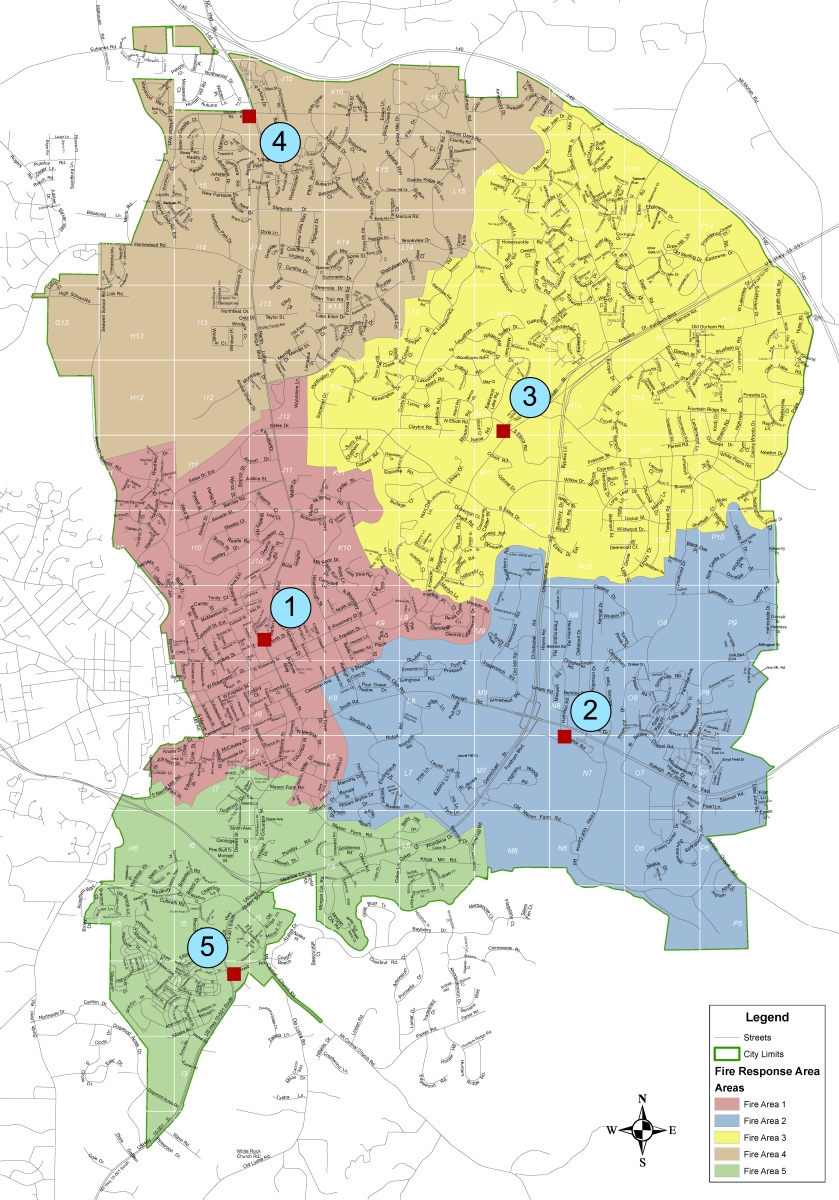 It was originally housed at Station 1, though it wasn’t staffed as a ladder company. One person was assigned to the truck, to drive to calls if needed.

(Sidebar: In 1975 [not 1971], the town merged the fire and police departments into a public safety department. Thus *all* apparatus may have operated with less than full staffing. Need to check. Fire and police were separated in 1993, and by that time, full fire companies were staffed.)

Chapel Hill’s next aerial apparatus was a 1972 Ford C/American LaFrance 55-foot telesqurt that operated at Station 3. It was bought for Station 1, but couldn’t fit in the doors, as the story goes. Only Station 3 could accommodate its size. The truck was nicknamed “Myrtle the Turtle” and was considered a hybrid engine/truck.  [ Truck didn’t serve as Station 5.] (Source: Oral histories.)

The first ladder company was activated after delivery of the town’s first aerial platform, a 1992 Simon-Duplex/LTI aerial platform, 1500/300/100-foot, rear-mount. It operated as Tower 71, starting at Station 4 and then moved to Station 3. It replaced the 1959 American LaFrance ladder.

Here’s a full fleet listing (PDF) from a couple years ago. See also this virtual exhibit[1] from the Chapel Hill Museum. 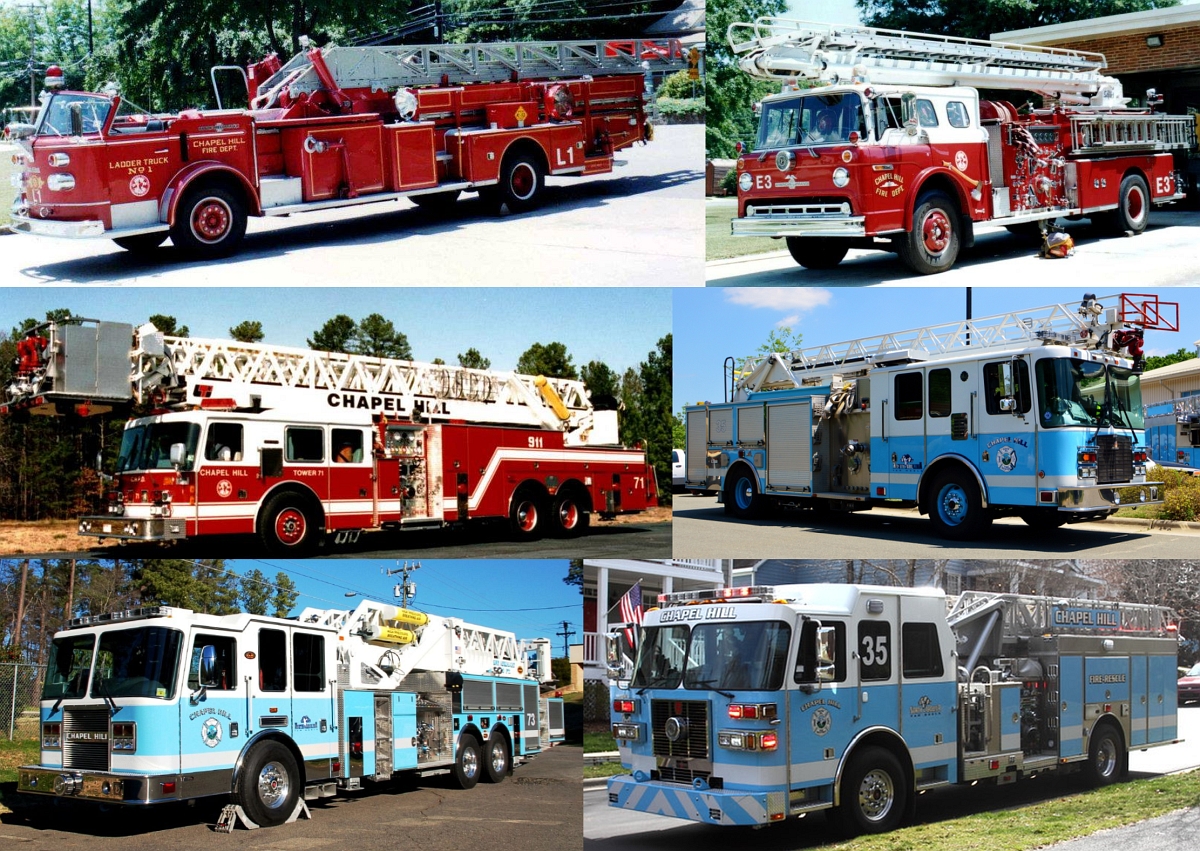