This is a blog archives posting from June 2011. The page is corrupted on the old site, so we’re re-posting here.

And a random artifact for your Monday enjoyment. This is the constitution and by-laws of the original incarnation (PDF) of the Raleigh Professional Fire Fighters Association (web site). Same is scanned from a photocopy of the original booklet.

The organization was chartered in 1938, as Chapter 548 of the International Association of Fire Fighters (IAFF). The original application was dated February 4 and listed 21 charter members. The Temporary President was K. J. Smith and the Temporary Secretary was R. G. Davis.

Need more more research and documentation in this area, on the history of professional organizations in the Raleigh Fire Department. Memo to self: do that. Meanwhile, click the cover to read the PDF document: 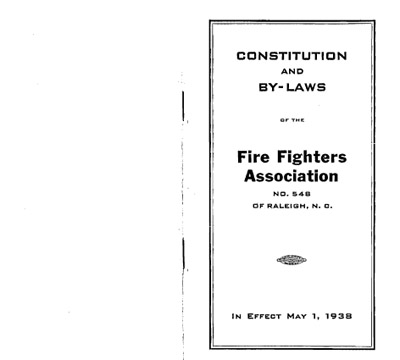