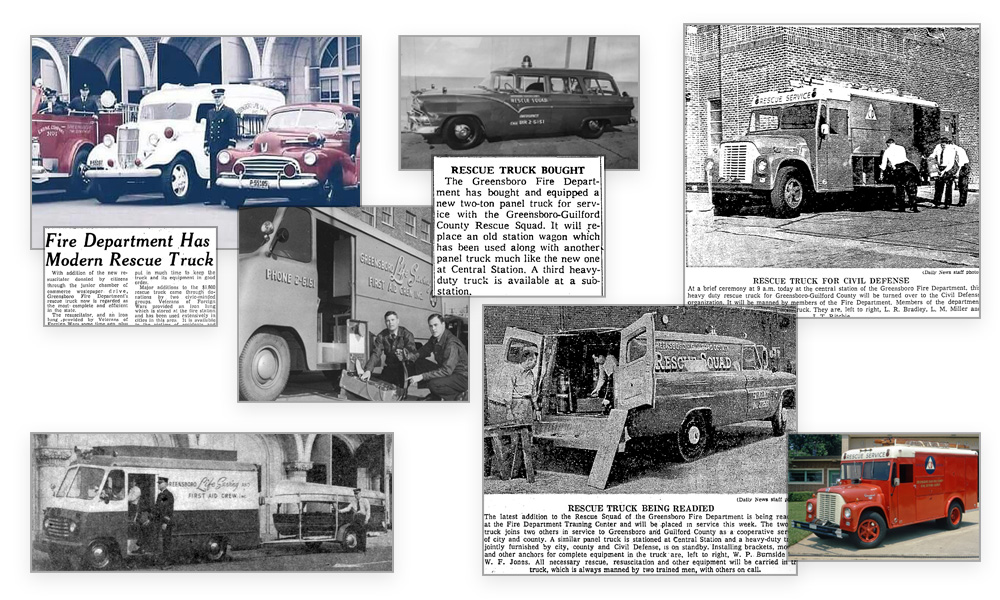 1942, October – Greensboro Daily News on October 7, 1942, reported that city-county civil defense officials will use money from the sale of donated scrap materials to purchase a rescue truck for Greensboro FD and to be used both in the city and throughout the county.

1944, October – Greensboro FD placed first rescue truck in service. Former Army ambulance from Fort Bragg that was  “reconditioned and remodeled and fitted with an extensive selection of equipment designed to meet any emergency.” It cost about $1,400 to equip. Converting the truck into a “modern rescue car” was largely performed by members of the fire department. They also repainted the rig. It was housed at Central Fire Station and was dispatched to any emergency, though not as an ambulance. [It was operated solely by city firefighters and intended for use in Greensboro and immediate vicinity. More details. 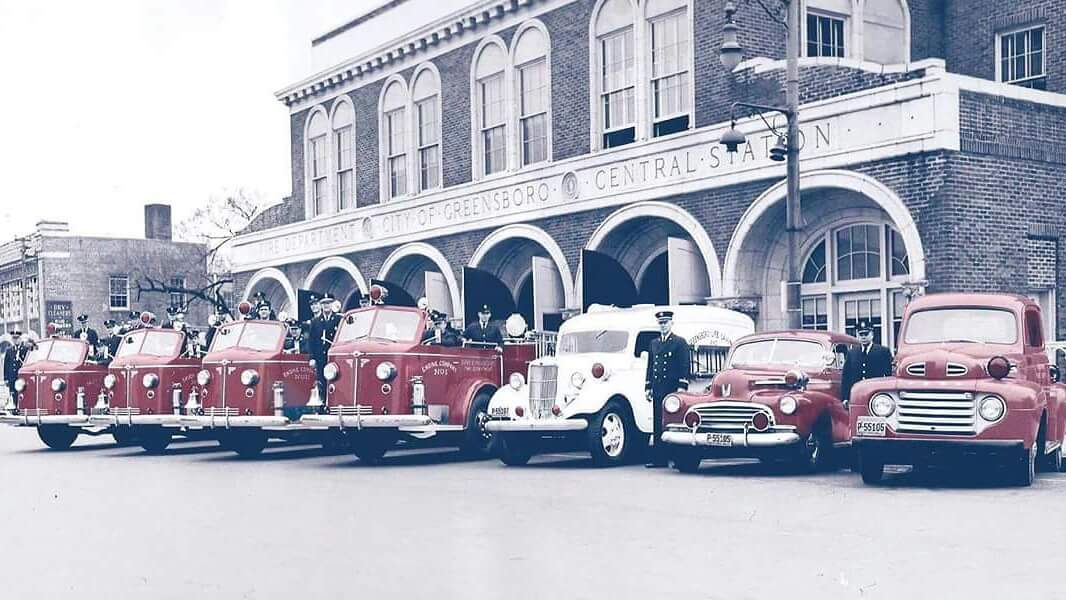 1945, October – GFD rescue squad received an Emerson resuscitator, inhaler, and aspirator, donated by the Greensboro Junior Chamber of Commerce. They were also equipped with an iron lung, donated by the Veterans of Foreign Wars when the squad was organized. The iron lung was “light enough to be taken to the scene.” More details.

1947, June – Greensboro Daily News on June 25, 1947, reported that the new non-profit organization Greensboro Life Saving and First Aid Crew was incorporated, its charter issued by the secretary of state on June 24.

1947, July – Greensboro Daily News on July 3, 1947, reported that GFD Fire Chief Calvin Wyrick was named captain of the life saving crew, at an organizational meeting held at Central Fire Station. Other named officers include first and second lieutenants, sergeant, medical adviser, treasurer, and secretary Herbert Grubbs of Roanoke, VA. The latter was the organizer of the squad and planned to move to Greensboro in the near future. He was a member of a similar squad in Roanoke. The group was planning to have 20 active members “trained in all phases of rescue and life saving work.”

1947, August – Greensboro Record on August 6, 1947, reported that the GFD rescue truck was transferred to the Greensboro Life Saving and First Aid Crew. There is also a provision that the title revert to the city if requested.

1947, August – The life saving crew beings operation on/around August 1. Greensboro Daily News on October 30, 1947, provides a three-month report. They crew includes 25 members, they completed an intensive training program, had more than $6000 in equipment, and answered 18 calls during its first three months of operation. The longest call from a 600 man-hour search at Buffalo Lake for the bodies of two men who drowned while fishing.

1949, November – Greensboro Daily News on November 20, 1949, reports that the life saving crew owes $343.95 and has only $250 in the treasury, and “no immediate prospects of income.” Since organized, it has operated on contributions, and only charging for oxygen it supplies to patients.

1950, January – Greensboro Daily News on January 13, 1950, reports on the annual report of the life saving crew. It answered 175 calls during 1949 and also delivered more than 250 units of oxygen to patients in hospitals and homes. About $6000 was received during the year for operating expenses, from private donations and funds raised by the Greensboro Junior Chamber of Commerce.

1950, March – Greensboro Record on March 3, 1950, reports that a new rescue truck has been purchased. The panel van was bought with $2,700 of $5,000 raised during a fund drive. The new truck is operational by April 30, 1950, when the Greensboro Daily News prints a picture and profile of the life saving crew. The squad has some 40 volunteer men. The rescue truck is also equipped with a boat trailer and two boats.

1951, May – Report on GFD from the National Board of Fire Underwriters notes that a 1950 Ford one-ton truck carries “complete life saving and first-aid equipment” including a trailer with two “outboard motor powered” boats, that apparently can also transport the iron light. The truck carries a 1000 watt generator with flood lights, rescue tools, two “inhalators”, four resuscitators, a portable iron lung, and three “oxygen tens.” It’s manned by one or two firemen at headquarters, and supplemented by “life saving and first-aid volunteers” as needed.

1956, January – Greensboro Daily News on January 19, 1956, shows a picture of the life saving crew rescue truck, as well as two firemen “on rescue duty.” It appears that the truck was housed and operated by GFD for several years, with the assigned firemen supplemented by the crew’s 45 volunteer members. 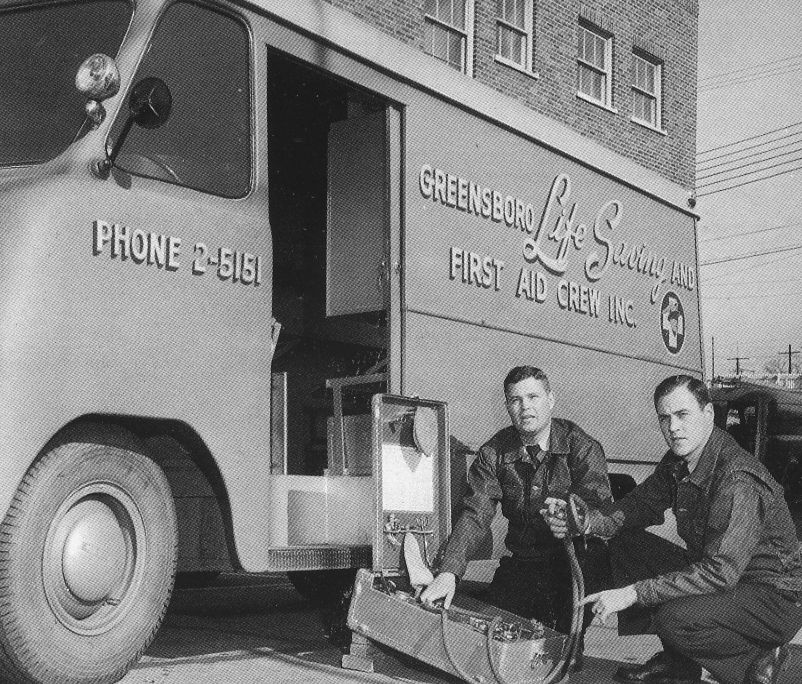 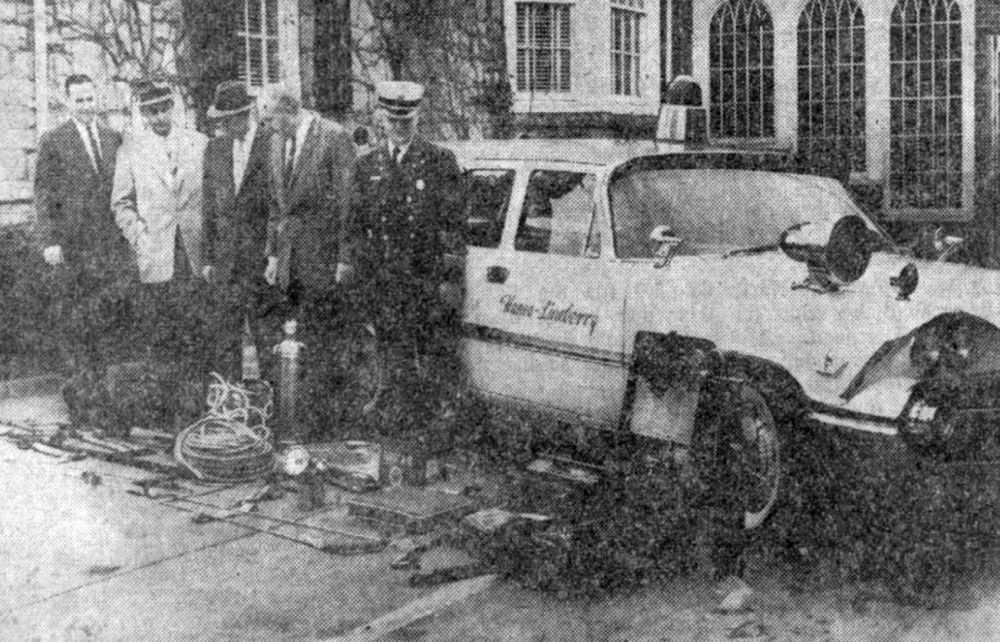 1960, January – Greensboro Daily News on January 26, 1960, reports that a “special equipped rescue wagon” is in service with GFD, operating as a “joint venture of the city and county.” The county furnished the vehicle and the city provided the equipment and personnel. it would be used “in addition to the present truck” and was equipped for all emergencies “except extremely heavy rescue work.” The chief of the GFD rescue squad was Captain D. C. Costner. See below. 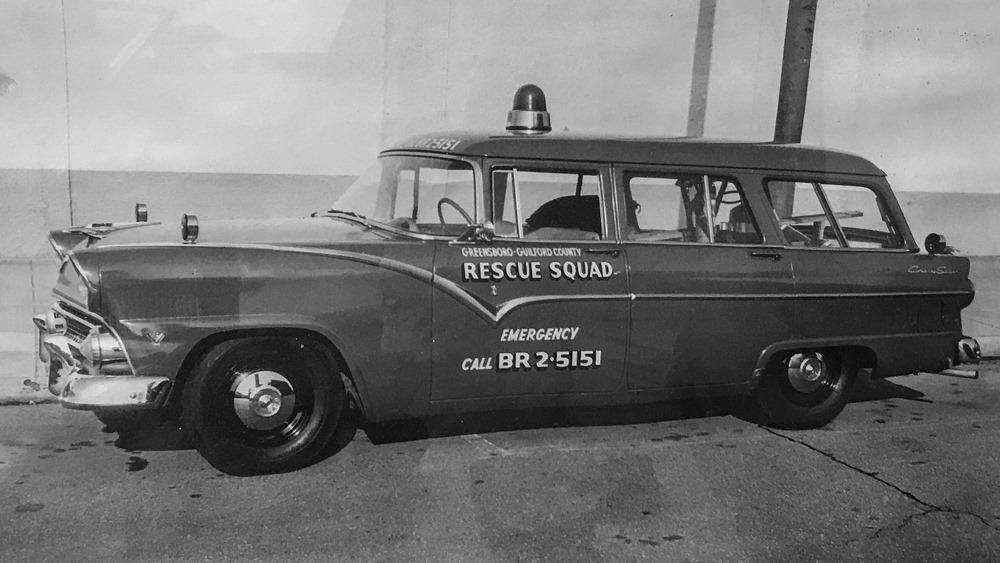 1960, August – Greensboro Record on August 10, 1960, reports that the “Greensboro-Guilford County Rescue Squad” had recently received a new truck. Pictured is a panel van that replaced “one that was several years old and was top heavy.” The squad is comprised of GFD members and is housed at a fire station. 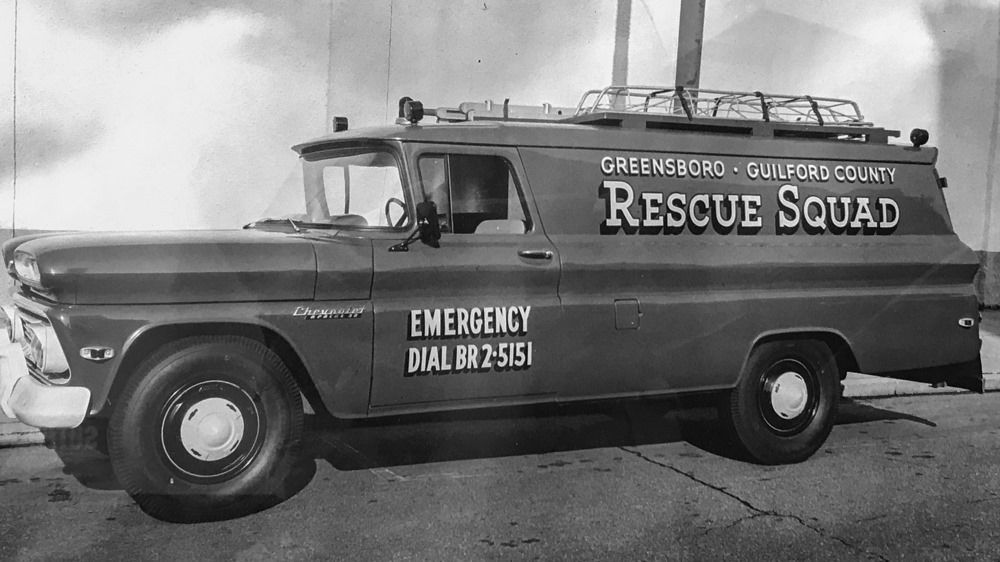 1962, October/November – GFD received an International/Boyertown Civil Defense heavy rescue truck lettered for Greensboro Guilford County Civil Defense Agency. Purchase of the truck was likely approved on March 15, 1962, for $11,241, from the Greensboro Record on March 15, 1962. Greensboro Daily News on November 13, 1962, reported that a brief ceremony was planned on that date, for the truck to be turned over to the city-county civil defense department. It would be manned by GFD members. 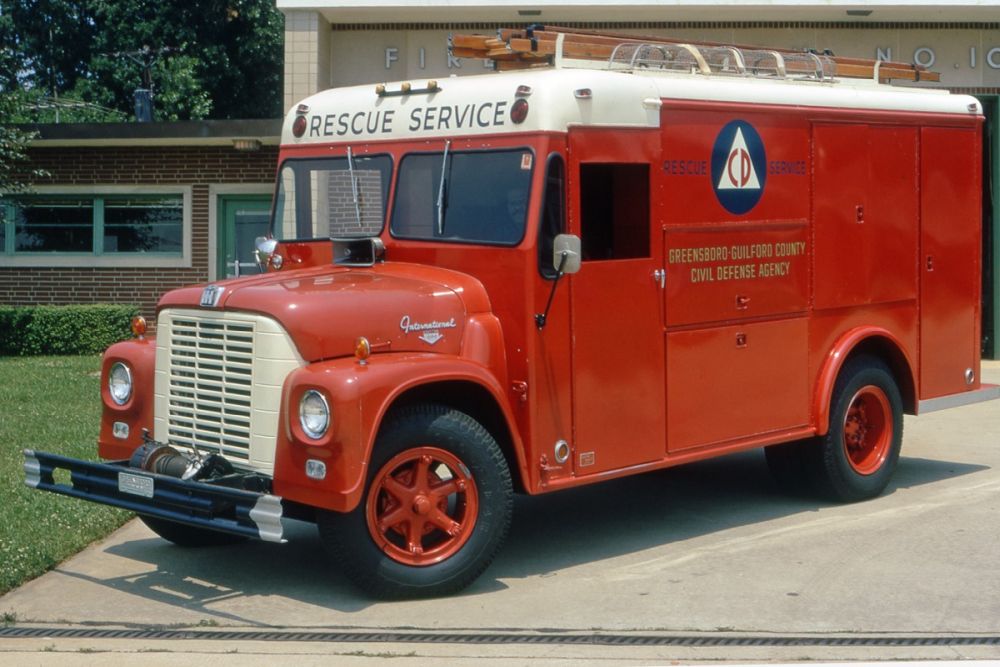 1964, February – Greensboro Daily News on February 6, 1964, reported that a third rescue truck is being added at GFD. The two-ton panel truck is again lettered for “Greensboro-Guilford County Rescue Squad” and replaced an older station wagon. GDN on August 9, 1964, included a picture of Station 5, where one of the two panel vans was housed, along with Engine 5 and Truck 1. The unit is named Rescue 1 and was moved from Central Fire Station. It’s cross-staffed by Station 5 personnel, but serves “in more of less a reserve capacity.” If needed while engine and truck are out, men from Central Station would be sent. Rescue 2 remained at Central Station and would “continue to answer the majority of calls for assistance.” The heavy-duty rescue truck, Rescue 3, was moved to Station 4. 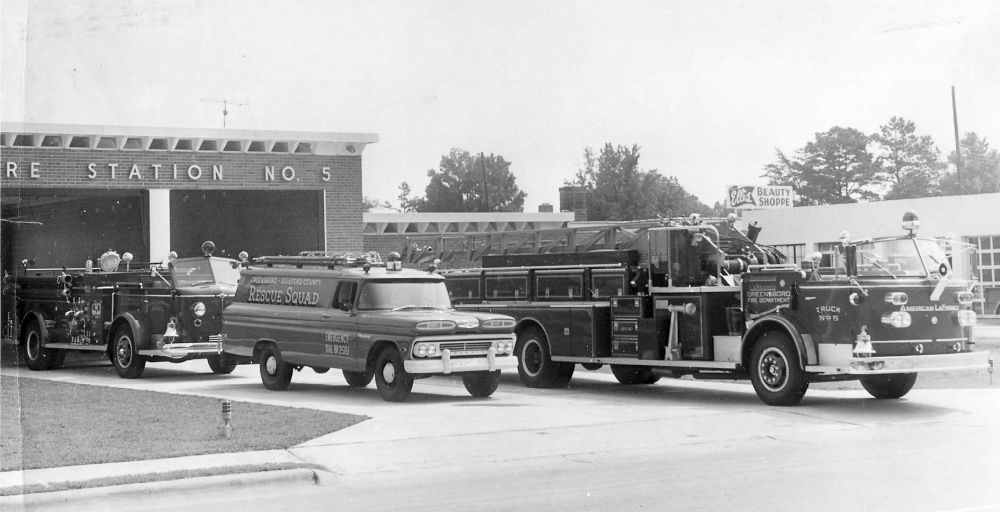 1966, March – GFD Captain D. C. Costner travelled to Washington, DC, and met with a member of the Armed Services Committee, to pitch a plan of establishing special-trained rescue units of 15 men at each armed forces installation. Each would be equipped with a heavy rescue truck, an ambulance, and “perhaps a third vehicle.” Costner, a 23-year member of GFD, had worked on the plan for three years.

1971, July – Last newspaper reference to “Greensboro Reference Squad.” [ Did the city/county unit cease operation around this time? Was it still operated by GFD? ]

1977, November – Greensboro Record reports on three new GFD squads purchased a few weeks ago. The $105,000 vehicles are midi-pumpers with 300 gallons of water and 20 gallons of foam. They’ll serve as quick-response vehicles, answering calls to vehicle fires, vehicle accidents, rescue calls, and “investigations.” Each is equipped with Hurst extrication tools, a first for Greensboro. They will be placed in service at Station 5, Station 7, and Station 11.